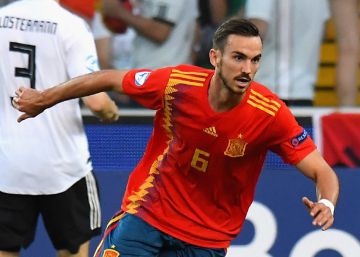 The victory of Spain in the recently contested European Championship U-21 has come to show that talent continues to spring from national quarries as in virtually no other place on the planet. Our players are still not the tallest or the strongest, nor the fastest or resistant, but their ability to relate to the ball – and between them – remains above an impossible average, that which can not be calculated because there is no way to include intelligence or intuition in a mathematical formula. That's why they follow the scale and the tape measure gaining ground in the capture of new products: because it is almost impossible to contradict the numbers, which are the best friends of those who manage in this business despising magic.

This same week, Óscar Ruggeri returned to the charge in his war against Mentalism, which is nothing other than the defense of football talent over the athletic or the military: one does not nicknamed Cabezón in vain, I suppose. The retired defense maintains that the dramas of the albiceleste start from a certain identity crisis, from the absence of martial arts, from being less Argentine than he and the other heroes of '86. The solutions of those who accumulate more memories than ideas usually border in those parts, obsessed with testosterone concentrations and abrasive genetics. How will you worry about the lack of talent who built a more or less successful career without any special ones?

South America is, today, a wasteland in purely football terms. Those favela dribblers, those clever potrero eyes, are disappearing in favor of more rocky, mechanized profiles … Germanized to the extreme when Germany itself has chosen to Hispanize the nature of its convictions. Those who today explain the continuing failures of the albiceleste from fraudulent axioms would not be able to gut the recent victory of Spain for the same reasons. Football, that art that so well practiced guys like Marc Roca, Fabián or Dani Ceballos, is a different sport that pretend to love those who argue that victories come on the basis of clenching their fists and show their ID, as Ruggeri and many others .

With this way of understanding modernity as a return to the past it has to do the resignation of Jordi Mestre as sports vice president of Fútbol Club Barcelona. The main defender of Pep Segura is gone, more and more discussed by the deterioration of the azulgrana philosophy and his unmistakable bet for the culture of the centimeter, the pulsations and the test of Cooper. Mestre leaves and behind him there will remain an indisputable truth: that of a hospitality entrepreneur who became a soccer ideologist in a club where, not so long ago, soccer players spoke about football. And the worst thing is not to play to be Johan Cruyff with a centenarian entity but to maintain that the Dutchman is past and Safe future. There are not enough metric tapes in the world to measure such boldness or heads that resist it, if perhaps that of Oscar Alfredo Ruggeri.