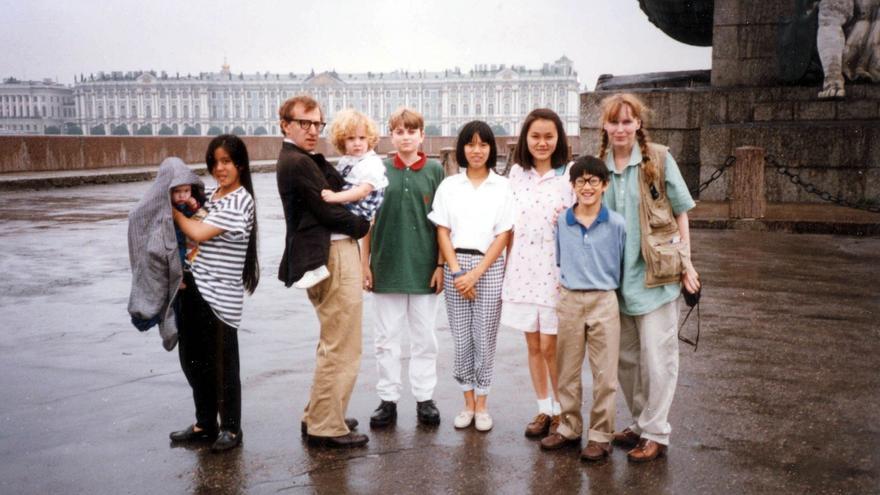 Los Angeles (USA), Feb 20 (EFE) .- The never closed wound between Woody Allen and Mia Farrow returns to the fore with “Allen v. Farrow”, a documentary series that HBO premieres tomorrow and that recovers the accusations against the filmmaker for alleged sexual abuse of his daughter Dylan Farrow.

With four episodes directed by Amy Ziering and Kirby Dick (Oscar nominees for “The Invisible War,” 2012), “Allen v. Farrow” has already caused a stir before its premiere and promises to further fuel the debate around the figure. Allen, who has consistently denied abuse and did not face charges after a highly controversial investigation.

Woody Allen and Mia Farrow had a relationship for 12 years, which spanned the entire decade of the 80s, and they worked together on numerous films such as “Hannah and Her Sisters” (1986).

Farrow had seven children: three of them she had with the conductor André Previn, another three she adopted with him (including Soon-Yi Previn), and one more that she adopted on her own (Moses Farrow).

After starting his relationship with Allen, Farrow adopted a girl in 1985 (Dylan Farrow), and later the director accepted that this was his daughter like Moses.

Also, Allen and Farrow, who did not marry and who lived in different houses, had Satchel (later Ronan) in 1987.

In August 1992, Dylan Farrow, then 7 years old, claimed that Allen had sexually abused her in the attic of Mia Farrow’s house in Connecticut (USA).

Allen rejected those accusations, but did say that he was in love with Soon-Yi, 22, the daughter of Mia Farrow and André Previn.

Woody Allen and Soon-Yi Previn, who are 35 years apart, married in 1997 and have two children together.

Regarding the accusations against Allen, a Connecticut hospital interviewed Dylan Farrow on several occasions and assured that there was no evidence of abuse, while the state attorney said there was “probable cause” against the director, but opted for not bring him to court so as not to further traumatize the little girl.

The New York authorities also did not file charges against the filmmaker amid a major media scandal and a huge controversy over a highly controversial investigation full of strange points.

Allen tried to secure custody of Moses, Dylan, and Satchel (Ronan), but in 1993 he lost his trial against Farrow.

In December 2017, with the recent rise of the #MeToo movement, Dylan Farrow wrote a text in the Los Angeles Times asking why Allen had not been marginalized for his alleged sexual abuse as had happened, for example, with Harvey Weinstein.

Many actors (Timothée Chalamet, Greta Gerwig …) regretted having collaborated with the director, Amazon canceled its production agreement with him, his film “A Rainy Day in New York” (2019) was only released in the US from a year later and in the middle of a pandemic, and his memoirs “Apropos of Nothing” were not published in Hachette after pressure from Ronan Farrow and the networks (in the end they were published in Arcade).

WHAT THE DOCUMENTARY PROVIDES

Dylan Farrow’s testimony is without a doubt the most interesting of “Allen v. Farrow.”

“There is a lot of misinformation, confusion and many lies. I have been subjected to all kinds of doubts, scrutiny and humiliation for this,” he says, referring to the depressions, panic attacks and fear of romantic relationships that he has suffered since.

Some of the most valuable moments of “Allen v. Farrow” come with the home videos that Mia Farrow recorded of the little one a day after the alleged abuse.

“He went to the attic (inaudible part), got behind me and touched my private parts,” says Dylan Farrow in those recordings.

Mia Farrow and Ronan Farrow also appear within a wide group of voices that unanimously defend in “Allen v. Farrow” the veracity of the accusations.

“It’s my fault: I brought this man into our family. There’s nothing I can do to eliminate that. And I understand why there are people who can’t believe it. Who on earth could believe that of Woody Allen?” indicates the actress.

Neither the filmmaker nor his wife Soon-Yi Previn appear in a series over which the shadow of showing only one of the parties hovers at all times.

Technically, Allen’s voice does appear in “Allen v. Farrow,” as the directors use audiobook excerpts from “Apropos of Nothing.”

But it is not at all clear why they choose some fragments and ignore others within a set of problematic decisions from the journalistic point of view.

On the other hand, opinions contrary to Mia Farrow and her environment are not included, such as that of her son Moses Farrow, who has been enormously critical of his mother, who defends his father, and who in recent years has painted a very turbulent image of that home that little fits with the idyllic vision presented by “Allen v. Farrow”.