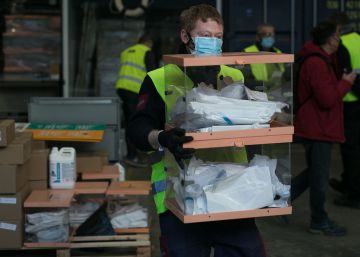 The electoral appointment to the Parliament of Catalonia next Sunday, February 14, is generating concern and a multitude of legal doubts among citizens. Especially among those who have been appointed to be part of the polling stations. These elections are abnormal because they are held in the middle of the third wave with a cumulative incidence of close to 500 cases. In this situation, the most common question is whether it is possible to reject the position for fear of contagion, particularly if you belong to a risk group or live with a person who is.

The text of the call itself, published in the BOE on December 22, indicated the possibility of postponing the vote in the event that health could not be guaranteed during the process. However, once the Superior Court of Justice (TSJ) of Catalonia has ordered to maintain the scheduled date, it is necessary to know what are the rights and obligations of those who have been appointed presidents, members or substitutes to the polling stations.

Is it mandatory to go to the table if I have been summoned?

Yes. As established by the Organic Electoral Law, it is mandatory for both incumbents and alternates. Failure to appear without just cause is an offense punishable by a fine or even jail time.

The president, the members and their respective alternates may not fail to attend or perform their functions, abandon them without legitimate cause, or breach without just cause the obligations of excuse or prior notice imposed by law.

It is a crime of disobedience (provided for in article 143 of the electoral law) punishable by imprisonment from three months to one year, or a fine of six to twenty-four months (in practice, 1,000 to 1,800 euros). In the first case, the sanctioned person would not normally go to prison, but would have a criminal record.

Is the fear of contagion a valid justification?

Not at the beginning. The law does not contemplate as an excuse being a person more vulnerable to the virus or having a relative belonging to a risk group.

A different matter is whether the holder or alternate has been diagnosed as positive or suspected of coronavirus.

In this sense, and to protect the health of the participants, the Government will test the members of the polling stations (about 60,000) for antigens a few days before the vote. On the other hand, in the event that on February 14 they have symptoms compatible with the covid, they must urgently go to a health center or call 061.

What causes can I put as an excuse?

The law establishes exceptions for certain people. They are exempt from this obligation, for example, those who present themselves as candidates, those over 65 who resign from their position, have a recognized disability or pregnant women after the sixth month of gestation or maternity leave. Other causes that automatically exempt you from performing the legal obligation are: being a pensioner with absolute permanent disability and severe disability; be in a situation of temporary incapacity for work; being confined in a prison or psychiatric hospital; or being the victim of a crime of gender violence when the convicted person with a restraining order appears in the census of any of the tables of the same electoral college.

From the date the notification is received, those chosen by lottery have a period of 7 calendar days to present this and other allegations (personal or family causes), on which the municipality’s Zone Electoral Board decides.

What to do if an impediment arises?

Designated persons who are unable to attend must communicate this, providing, at least 72 hours before, the pertinent justification. This is established by an instruction from the Central Electoral Board that distinguishes between personal, family and professional cases.

As personal or family causes that could justify the change at the polling station are, among others, having a surgical operation scheduled for that day, or being the only caregiver for people, minors or elderly people who cannot be left alone.

Can professional obligations be claimed?

Having an inexcusable job responsibility is also a valid excuse for not coming to the table, but not always. The norm establishes what type of labor obligations serve as proof. In the first place, workers who provide essential services to the community and are on duty that day (doctors, firefighters, policemen …) are released from their position. Also the directors of the media and the heads of the information services that must cover the electoral day. Finally, professionals who have to participate in public events to celebrate on voting day are exempt.

And if I work on Sunday, do I also have to go?

Yes, unless it is an essential position. If you have been chosen to form the polling station, you must attend as a mandatory matter. The law provides that these workers will have paid leave for that day, and also a reduction of the working day on the following Monday of 5 hours. The rule thus guarantees the necessary rest.

These permits are not recoverable, and it is the company that must pay them once the employee justifies his performance as a member of the board.

If I’m just going to vote, can they force me to be president or a member?

Yes. The electoral law establishes that the table cannot be constituted without the presence of a president and two members (from among the incumbents and alternates). In the event that this is not possible, the Board can freely designate the people who should make up the polling station, “and may even order that any of the voters who are present on the premises form part of it.”

Those so elected cannot refuse, and, unless they have a just cause, if they leave the place they could be punished for an electoral crime. But, although the law does not distinguish these cases from those who do not attend despite having been selected by lottery, “this circumstance must be taken into account,” says Jordi Pacheco, doctor in Law and Political Science and dean of the College of Political Scientists and Sociologists of Catalonia. The fact of not having had the opportunity to make the relevant excuses in a regulated procedure places them at a disadvantage. For this reason, believes Pacheco, whoever has a well-founded cause should be acquitted, “although under normal conditions it would not have been accepted.”

What happens if the table is not set up on voting day?

It must be formed within 48 hours, that is, the following Tuesday. This is established in article 80 of the electoral law.

The problem with this measure is that some voters may have inside information about how the results are going before going to vote. This circumstance, Pacheco points out, is an issue that can alter their sense of vote, to act strategically, and cause serious harm to citizens who voted two days before, as well as a “breach of the principle of political equality.”

For this reason, the Government is considering not publishing the results of 14-F on the day of the elections if many tables fail.

The general director of Participació i Processos Electorals, Ismael Peña-López, recently announced on Twitter that, in principle, 99% of the polling stations in Catalonia have enough members to constitute themselves.

In case of contagion on the day of the voting, can I request compensation?

Yes, as long as it is proven that the infection occurred within the polling stations during the exercise of the right to vote or during participation as a member of the polling station. It is, therefore, a problem of proof, which will determine if the claim is successful.

The autonomic norm allows to vote positive or quarantined, so, in principle, there is the possibility of transmission. Despite the fact that the members of the electoral tables will be provided with protective measures (PPE suits, masks, face shields, gloves, hydroalcoholic gel …), contagion is not impossible in these circumstances.

As Pacheco explains, the Administration must be liable for the damages caused by the operation of public services (in this case by the electoral mechanism) whenever there is a causal relationship. “It would be easier to show that the contagion occurred when going to vote, for example, if it is a person who is usually isolated and has not been exposed,” he says.

Am I entitled to sick leave if I have an accident?

Yes. Presidents and members are protected by the Social Security system like any other worker. In the event of an accident, they may request sick leave.