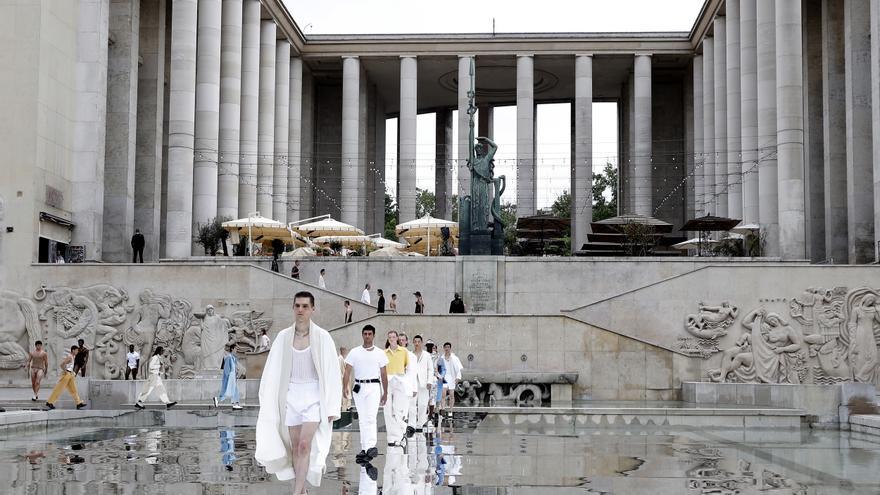 Paris, Jul 4 (EFE) .- Haute Couture has taken advantage of the last year of instability in the fashion industry to recharge its batteries and this Monday it returns to the catwalk with great moments, such as the return of Balenciaga after more than 50 years , and the collaboration of Jean-Paul Gaultier with new creators.

After a year without fashion shows, the official calendar of the Federation of Haute Couture and Fashion, which is the organizing body, includes up to eight face-to-face catwalks, possible due to the improvement of the health situation in France, which for the moment remains stable with few infections nationwide despite the delta variant.

The great “maisons” such as Dior, Chanel, Jean-Paul Gaultier, Balenciaga, Zuhair Murad, Giorgio Armani Privé and Vaishali S. physically present their autumn-winter 2021/2022 collections between Monday and Thursday, although the majority of the thirty brands of this edition maintains the virtual format.

Among all of them, Balenciaga and Jean-Paul Gaultier get all the attention.

For the first, this will be his first Haute Couture show in 53 years, since the Spanish designer Cristóbal Balenciaga closed his workshop shortly before his death.

The firm had only worked on ready-to-wear since it was relaunched in the 1980s – today it is owned by the French luxury giant Kering – but its designer, Demna Gvasalia, announced in 2020 his desire to bring the sewing line back .

The particularity of this sector is the strict requirements imposed by the federation to be officially considered “Haute Couture”. Among them, the creations are made by hand and made to measure, which requires hundreds of hours of work; and also that the workshops have a minimum of artisans.

Fantasy, innovation and sewing expertise prevail with stratospheric prices, which makes these designs available to only a few hundred people in the world, sometimes conceived for mere contemplation.

It will also be the occasion to see the long-awaited collection of the Japanese Chitose Abe, designer of Sacai, in front of Jean-Paul Gaultier, who after retiring in 2020 now leaves his name in the hands of young talents to contribute their own interpretation of the brand .

Abe’s parade for Gaultier was supposed to take place in July 2020, but the pandemic has delayed this presentation for a whole year.

Other brands such as Fendi, Maison Margiela, Schiaparelli or Stéphane Rolland present their collections behind closed doors in small presentations with guests and buyers, although in parallel they maintain the virtual format, disseminated through the Federation on the internet and on social networks.

Also in video they show what designers such as Giambattista Valli, Rahul Mishra, Julie de Libran, Viktor & Rolf, Iris Van Herpen or Alexandre Vauthier have been working on, whose virtual shows will take place until Thursday.

The Italian Valentino is not on the calendar this time after the decision to present her Sewing collection in Venice.

In parallel, and outside the official agenda, the brand Alaïa returns this Sunday night to the catwalk for the first time since the death in 2017 of the Tunisian creator Azzedine Alaïa with the creations of Pieter Mulier, new director of the brand, known for to have been for years the right hand of Raf Simons.