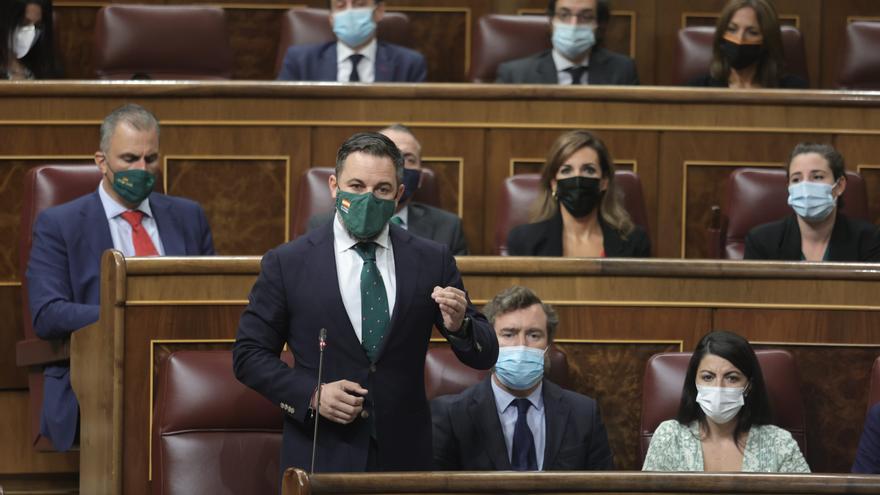 Two areas that generate great political polarization, hate crimes and abortion, come to the Congress of Deputies this week amid the tension it has caused in recent weeks the escalation of extreme right-wing aggression, homophobia and racism, with the approval of the Popular Party, which governs Andalusia, the Community of Madrid or the Region of Murcia thanks to the support of Vox.

The leader of the ultra formation, Santiago Abascal, raised the tone even more in the Lower House last Wednesday and assured that migrants are the “enemies of Spain” or that the Government intends “to gag the Spaniards while they are with the enemies of the Spaniards, who are the ones who assault the borders.”

A day later, on Thursday, Isabel Díaz Ayuso, the president of the Community of Madrid –one of the regions where, according to official figures, homophobic attacks have increased the most in recent years–, assured that “homophobia is in the head of the left” and promised to change the laws that protect the LGTBI collective as claimed by Vox, whose votes were necessary for her to be sworn in as president.

The escalation of outrages against immigrants and LGTBI people by the extreme right worsened over the weekend, during the Nazi demonstration that toured the Madrid neighborhood of Chueca –One of the reference areas for lesbians, gays, transsexuals, bisexuals and intersex people– with proclamations that demanded the exit of the “queers” from the city or that shouted “out of Madrid” and other slogans against migrants.

The political earthquake generated by this march that terrorized the residents of the center of the capital forced this Monday the Government delegate in Madrid, Mercedes González, who was the one who authorized the demonstration, to apologize to the LGTBI collective and acknowledge having been “deceived” by the organizers, among whom were several neo-Nazi groups. In their request for authorization, these groups indicated that the protest was going to be “against the Government’s 2030 Agenda”, but eventually it became a constant glorification of Nazism, racism and homophobia.

Government the demonstration has appealed to the Prosecutor’s Office, which is already investigating the possible hate crimes that could have been committed. On the contrary, the highest authority in Madrid, the president of the Community, Isabel Díaz Ayuso – in power thanks to two agreements with the extreme right of Vox – has avoided condemning the intolerance expressed openly in the streets, and that when it has being denounced by collectives or other political parties, she has considered that the Madrilenians were being “attacked”.

Mayor José Luis Martínez-Almeida did speak out instead, showing his “total and absolute condemnation” of what happened in Chueca and calling homophobes “barbaric and undesirable”. In addition, Almeida supported the actions of the government delegate and defended the “right to demonstrate,” while Ayuso remained silent three days after the march and left the sentence in the hands of his counselor of Justice, Enrique López.

Vox, for its part, tries to blame the demonstration on the Government with convoluted arguments such as that the protesters come from the “socialist sewer”, as Abascal himself said on Sunday, or that among those who attended some “shirt with the Fight Club, a project that organizes The Pirracas, one of those ultras and buccaneers who seems to have been part of the security guard of Mr. [Pablo] Iglesias “, as Jorge Buxadé denounced this Monday.

This scenario of tension promulgated by the most extremist sectors of the right will foreseeably be transferred this Tuesday to the Congress of Deputies that last week, the first of the full political course, was already loaded with disqualifications and attacks by PP and Vox against the coalition government. All this despite constant calls to lower the tone and seek understandings made by the president of the Lower House, Meritxell Batet, in Monday’s session.

The clashes are assured when a PSOE bill is addressed in plenary session that seeks to punish with jail the harassment of women at the doors of the clinics that interrupt pregnancies, alluding to the concentrations supported by both Vox and by sectors of the PP. Also for another proposal that will be debated in this Tuesday’s session presented by the Santiago Abascal party that, amid criticism for encouraging xenophobia and homophobia in the streets with his speech, tries to blame hate crimes on the Government of PSOE and United We Can.

The extreme right will defend a consequential motion of interpellation “on the measures that the Government is going to adopt to avoid the trivialization of hate crimes.” The objective of the initiative, which was already presented by the deputy of Vox Macarena Olona last week during the plenary session, is to try to accuse the Executive of linking his party with the growth of hateful attacks registered by official bodies to “try to outlaw it. “.

What the Abascal party claims is that despite its proclamations accusing migrants of being “enemies of Spain”, of calling the LGTBI collective a “lobby”, asking that the Pride celebration take place outside the center of Madrid or, Directly, endorsing the healing therapies for homosexuality, Vox has no responsibility for the rise of homophobic attacks, but rather it all responds to a Moncloa strategy to outlaw the party based on the party law.

This sour debate and the foreseeable crossing of accusations will be preceded by the discussion on the proposed law of the PSOE that proposes a reform of the Penal Code to add a new article that punishes with “the prison sentence of three months to one year or of work for the benefit of the community from thirty-one to eighty days “to anyone who” harasses or restricts the freedom of a woman who intends to exercise her right to the voluntary interruption of pregnancy, promoting, favoring or participating in concentrations in the vicinity of places enabled to interrupt pregnancies, causing an impairment in the freedom or privacy of this “. Preventing these protests was one of the measures agreed by PSOE and United We Can in their coalition agreement.

Congressional sources assume that the initiative will go ahead with the support of the Government’s parliamentary partners, but they also predict a strong rejection on the part of the Vox rights and also the PP, which in the past have allied themselves with the theses of anti-abortion organizations, and that they will foreseeably reject the prohibition of concentrations in front of the clinics since they consider them as part of the exercise of freedom of expression.

This same Sunday, and given the imminence of the debate, the deputy spokesperson for Vox in Congress, Macarena Olona, ​​already predicted her frontal opposition to the measure. This week the PSOE law that makes it a crime to pray in the vicinity of abortion clinics is being debated in Congress. The Government of death does not want a child’s life to have one last chance. They will have Vox in front of them, “she warned in a tweet.

The proposal to reform the Penal Code to punish women and professionals for harassment in the clinic environment It was presented by the PSOE alone, despite the fact that it is one of the issues that the Ministry of Equality is working on, led by Irene Montero in the comprehensive reform of the abortion law that it intends to have ready by the end of the year. “The Ministry of Equality has announced on numerous occasions that harassment of women in pregnancy termination clinics cannot be allowed and that in this sense measures would be included in the next reform of the law,” they assure from that department. From the socialist group they affirm that the initiative was registered in “harmony” with their government partner and that they decided to do so to expedite the regulatory change in the face of constantly recurring cases.

The debate on the PSOE proposal will be only the appetizer of what will take place in the coming months before the comprehensive reform of the abortion law prepared by the coalition government, in this case the Ministry of Equality led by Irene Montero, and which aims make flexible the cases in which it will be legal to resort to voluntary interruption of pregnancy by women.

In this week’s plenary session, a PP law proposal to “reinforce judicial independence” will also be debated, which includes the last condition that the leadership of Pablo Casado has placed on the Government to lift the blockade of more than 1,000 days to which they have subjected the popular ones to the renewal of the General Council of the Judicial Power (CGPJ). What the PP is asking is to change the system of election in that body so that the members of the judiciary are directly elected by the judges, an initiative that the party never launched while it was in government.