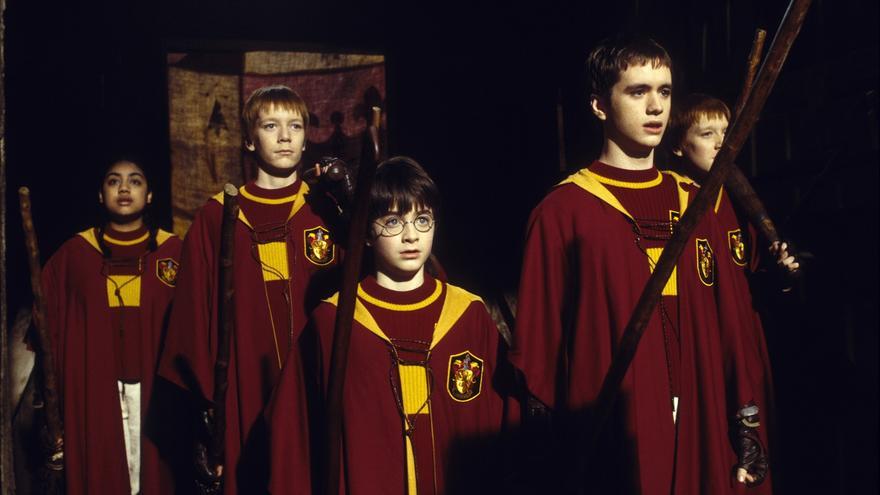 It was 2001 when, in November, it hit theaters’Harry potter and the Philosopher’s Stone’, the first installment in the Harry Potter saga. After the success of the books, with millions of copies sold, the film adaptation of JK Rowling unleashed a veritable magic fever by bewitching the entire planet. As it is, the cinemas will rerun for the third time the first film that led the author to fulfill her dream of being a writer.

Gryffindor, Slytherin, Hufflepuff or Ravenclaw What is your favorite house? We read you in comments. #Harry potter and the Philosopher’s Stone – November 12 rerun in theaters. pic.twitter.com/ZTnkp0DZ11

It was 1990 when its author JK Rowling, began to write the plot of the boy with glasses and a scar in the form of a lightning bolt on his forehead on a napkin while having a coffee in the Elephant House cafeteria (Edinburgh), according to popular legend. It took him about six years to finish writing the first volume.

The novel was rejected by several publisherss, 12 specifically, until the British Bloomsburry decided to publish it on June 26, 1997, a year later it would arrive in the United States. Such was the success of the story of the boy wizard who survived on the half of the planet that Rowling sold the rights in 1999 to its first four installments, thus marking a whole generation.

Although there are people who are authentic Muggle (non-magical people) and haven’t seen the movies or read the saga, I’m sure if you have heard of the adventures of young wizards who want to end “the one who must not be named” (Voldemort).

“Harry Potter and the Philosopher’s Stone” tells the story of an orphan boy, Harry, who lives in the hole under the stairs of the house with his uncles and his cousin, the Dursleys. But, his sad existence takes a complete turn when he turns eleven years old and receives the invitation to study magic at the prestigious Hogwarts School of Witchcraft and Wizardry.

Despite the opposition of his uncles, Harry takes the train that leaves from platform 9 ¾ at King’s Cross station in the direction of Hogwarts to become a student of spells, spells and magical arts. There he will begin to learn the wonders and dangers surrounding the world of magic, meet unforgettable companions, and come face to face with evil like no other wizard has ever had to do before.

Chris Columbus, an expert in family cinema with hits like ‘Home alone’, He was in charge of bringing the magical universe of the first two Harry Potter films to the big screen. He accepted the assignment after his daughter constantly urged him on.

Daniel Radcliffe was cast for the lead role, who with only eleven years was about to become a celebrity worldwide, as do her co-stars: Emma Watson as Hermione Granger, Rupert Grint as Ron Weasley, and Tom Felton as Draco Malfoy.

Unlike Grint, who was an absolute fan of books and was very clear that he wanted the role of Ron, Radcliffe’s was quite a surprise, since he was neither looking for the part nor wanting it.

The first candidate to be Harry Potter was actor Joel Osment, known for his role in “The Sixth Sense.” However, one of the demands that Rowling made when she sold the rights is that all the actors had to be British, so the young man was discarded for being American.

From the first film, the writer was present in the filming and in the adaptation of the plot. So much so that he was in charge of choosing in person the actors who would play some of his characters such as Alan Rickman, who played throughout the saga Professor Severus Snape or Robbie Coltrane, who would play the good-natured Rubeus Hagrid, keeper of the keys and Hogwarts grounds.

Richard Harris, who played Professor Dumbledore in the first two tapes, as, because of his death in 2002 he had to be replaced by actor Michael Gambon, he was also chosen by the author.

The “potterheads”, as the followers of the Harry Potter world are known -whether they are older or small- They are in luck as they will have the opportunity to relive the adventures of one of the most beloved trios in cinema.

To commemorate the anniversary of this film and the adventures of the young wizard who marked and continues to mark an entire generation, Warner Bross has decided to re-release the film in some Spanish cinemas. This would be the second time that in the same year it returns to theaters, since, to support the return to the cinema, the distributor decided to screen the entire saga for a while.