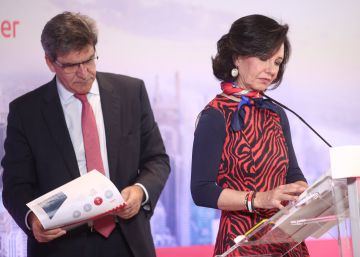 The banking She seems to continue to carry out a series of Herculean works that she has been carrying out for a decade and, like the Greek hero, tries to find a quieter environment in which to catch her breath. The joint net profit of the six largest Spanish financial institutions in 2019 was 13,592 million, 18.4% less than in the previous year. The sector can assume the conditions that negatively affect its profitability, but also aspires to a playing field where there is a reasonable level of financial and competitive oxygen.

Among the burdens that are assumed and those that are difficult to detach are those that are inherited from the Great Recession. On the one hand, the deterioration of assets, of which much of the work seems done or ordered. On the other hand, the not always properly weighted distribution of responsibilities of the crisis and the effects on its image. This is a problem that also makes the sector, at times, a target of a political vindication. There is also a clear awareness that, like most service companies, financial intermediation companies have to move forward in the scanning path, with lighter structures.

However, other limitations appear with a more controversial concurrence and intensity. The fourth quarter of last year was a faithful reflection. Before drawing the final stretch of last year, the expectation of a large part of the financial sector was that central banks would promote a monetary change that would contribute to greater normalization. In particular, leaving behind negative types and expansive measures. Not only did it not occur, but progress has continued along the path of monetary laxity. According to data from yesterday from the Bank of Spain, Euribor remained negative in January (-0.25%) and there was a year-on-year increase in credit for households (0.2%) and companies (0.5%), which had been falling since September (after having grown the previous 16 months) due to the fall in economic expectations endorsed by the new blow monetary.

Another element that brings weight to the bank flight is regulation. It is not questioned – not from the sector itself– that post-crisis regulatory rearrangement had many elements necessary to restore financial stability and long-term confidence. But regulatory compliance begins to reach a bureaucratic weight with overlaps and not always reasoned and, above all, it seems to make little sense to talk about new special taxes for banking. In addition to contributing taxally like the other companies, the contributions to the common insurance (the deposit guarantee fund) of the banks are substantial (1,100 million euros in 2019).

The bank was just waiting for a year of a certain comeback and most analysts were betting on a significant recovery of stock market value, when the macroeconomy and monetary inertia continues to press downward in the short term. The expectation is still of long-term improvement but, in the short term, there are notable obstacles.