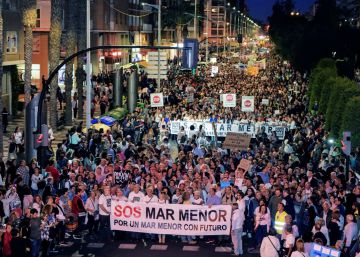 Days before the deaths of thousands of fish that hit the beaches of the Mar Menor on October 12, between 500 and 1,000 tons of nitrates reached the lagoon after the last cold drop, estimates a latest report signed by experts in the field of the Spanish Institute of Oceanography, several universities and the Higher Council for Scientific Research (CSIC ). These, in addition to those already contained in the lagoon, triggered the dantesque episode with fish and crustaceans suffocating on the banks. Nitrates come, above all, from fertilizers of irrigated crops that have multiplied in the Campo de Cartagena area (the basin that pours into the Mar Menor). As a result, "an area of ​​over 9,000 hectares – the Mar Menor occupies 17,000 hectares – has again been devastated at the bottom of the lagoon," the researchers calculate.

Samples that were taken days after the storm passed give nitrate concentrations around 13 milligrams per liter, "100 times above those that can be considered normal," the report specifies. 35 tons of ammonium and more than 100 phosphates also entered. The pollutants were in the 100,000 tons of sediment that the flood dragged into the lagoon, which already had a "deep degradation".

"The problem is not a consequence of the entry of fresh water itself, but of nutrients (nitrates) washed away by water, that they are the fuel of the eutrophic process (increase of nutritional substances that causes an excess of phytoplankton, which leads to lack of oxygen) ", the researchers clarify. In fact, they point out, the avenue of November 1987 accumulated a rainfall a third higher than the Dana (isolated depression in high levels) of this year, "in spite of which there were no episodes of massive mortality in the lagoon".

The report reviews the process of deterioration of the Mar Menor, which receives "since the eighties large amounts of organic matter and nutrients both diffuse and punctual agricultural activity." This contamination has affected the underground waters of the Quaternary aquifer, and the surface waters. Urban discharges (wastewater) and agricultural have been, however, focused on specific points and times. Until 2015, chlorophyll values ​​were low, typical of the system, although some peaks were warned in the 2000s that warned of the risk of eutrophication. Since the end of 2015, an unusual growth of phytoplankton was confirmed, which shot up in the summer of 2016. The transparent waters became a green paste, the light stopped reaching the bottom and 85% of the benthic vegetation of the Mar Menor disappeared .

In this scenario, the authors warn that the process of recovery of the Mar Menor will be "long and very complex", because even stopping all current nutrient inputs "the funds will continue to release nitrates for quite some time." The first step for them is "to stop the entry of sediments and nutrients, improving the techniques and efficiency of agricultural fertilization". They also advocate the recovery of the channels of the hydrological network of the Mar Menor basin, the implementation of less aggressive tillage systems, the recovery of wetlands or the use of plant covers and hedges to reduce floods.

They question the effectiveness of the Zero Discharge Plan presented by the Ministry for Ecological Transition because its main measures are based on the construction of public works and do not point to the origin of the problem. Scientists warn, at the same time, that solutions that have been considered as increasing water supplies from the Mediterranean "are not an option," for the same reason and because "they would cause completely undesirable side effects."

Bulos on the coronavirus spread in Spain

Coronavirus arrives in Latin America through Brazil from Italy