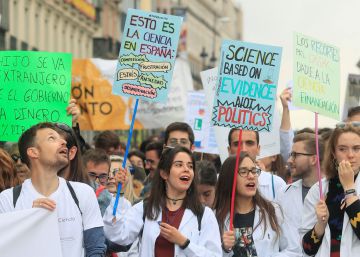 Scientists work on the frontier of knowledge, in a world where discoveries are being made that will shape the ways of living within decades. However, their political and labor demands seem fossil remains of an imprecise past. This morning, in Madrid, hundreds of researchers took to the streets in Madrid with the usual demands, hoping they don't receive from the rulers the usual answers.

“While many countries of the European Union already invest 2% of their GDP in research, in Spain we are in the 1.2%, a level comparable to 10 years ago”, Said one of the 500 people who, according to the police, have participated in the march. The promise of reaching 2% of investment in science has been heard in the mouth of the socialist minister Cristina Garmendia or the Secretary of State for R & D & I of the Popular Party, Carmen Vela. The reality is that in recent years not only has it not advanced towards that 2% but it has receded.

"Without science there is no future", "without 2% there is no experiment" or "do not miss the next Cajal". Scientists chanted slogans like these on a morning that, as usual in Madrid, several mobilizations coincided with different demands. "This manifestation of what it is?" A curious asked a local policeman. "I don't know, there are so many," replied the agent. At the same time as the scientists, thousands of people marched through Gran Vía, a few meters away, demanding equal pay for all the police forces of the State.

The scientific protest, which took place between the Puerta del Sol and the Congress of Deputies, half a kilometer away, was supported by major unions in the field of science – CC OO, UGT and CSIF – and other organizations, including the Spanish Association for the Advancement of Science, the Spanish Association of Hospital Workers or the Royal Spanish Society of Physics (RESF).

In the manifesto, read in front of the Congress of Deputies, the drastic cut in resources dedicated to R&D that occurred with the crisis at the end of the last decade was denounced. "We are satisfied – they have said – with which they agree to reach throughout the next legislature to 2.2% in which the average investment of the countries of the European Union is located".

Manuel Heras, representative of FJI Precarios, one of the convening entities, also pointed out the significant loss of purchasing power that postdoctoral researchers have suffered since the beginning of the crisis due to the lack of updating the amounts offered by the scholarships. “We want there to be a decent career, and for that we need a clear career model,” added Heras. Protesters also demanded measures to ensure the predictability of public calls to prevent some scientists from having to go to work periodically, and reducing the temporary employment of researchers and hired workers.

Heras also reported that PSOE, PP, Citizens and Podemos have signed their manifesto, a consensus as common among politicians as the lack of concrete actions. “We need measures, not promises. Because research is vital for human and society development, because we want our country to stop relying on third parties and determine its own future, ”the protesters said before asking for a state pact for science to agree with everyone. the parties. "Understand that science is not an electoral weapon," they said very close to the end of their manifesto, not knowing if they expect this feature to help them or not to finally unblock their demands.