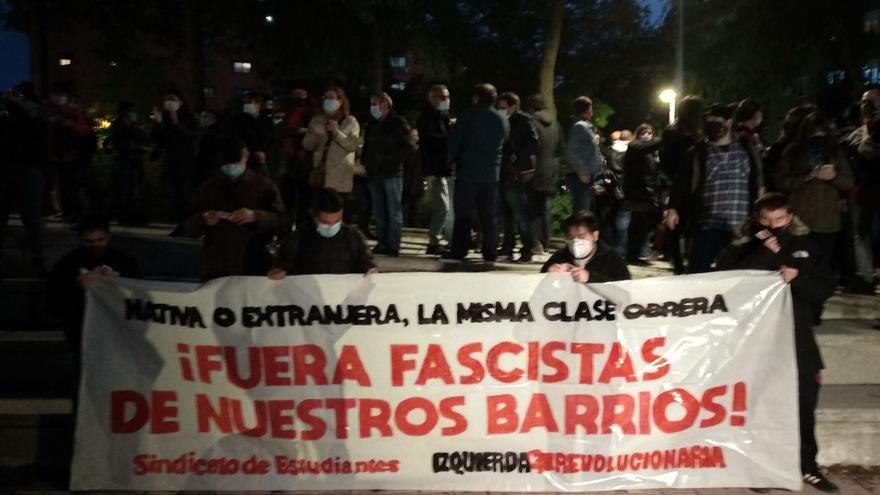 Carmen lives in San Blas and is concerned with the youth of the neighborhood. “My daughter tells me that there are many looks. But we are workers!”, She laments. The couple went this afternoon to the concentration in defense of foreign minors taken in in a neighborhood block, after a brawl on Tuesday between Maghreb and neo-Nazis and a far-right demonstration on Wednesday warm in the environment. About 500 people attended the act of redress, called by anti-fascist groups in the small park between Russia Street and Guadalajara Avenue.

“They confront us with the weakest,” criticizes Miguel, a 56-year-old engineer, 24 of them in San Blas, who does not deny that there may be a specific problem of coexistence, but believes that it is taken out of context for spurious reasons. “It is painful how they manipulate us,” he complains. Beside him, Félix, a Galician who arrived in the neighborhood in 2001, agrees: “They want to ignite the spark of hatred.” He attended the call to protest “against racism.”

“Fascists out of our neighborhoods” or “They will not pass,” chanted the audience, the vast majority young, while Carmen, a health center official, slipped a possible economic explanation for the local rise of the extreme right. The area of ​​the expansion, where the altercations took place, is a relatively recent construction area, after the eviction of the gypsy town in the 1980s. “A home here can cost 300,000 euros, and on the other side of the road from Vicálvaro, 70,000” , pointed out Pedro, her husband. “New rich,” he summed up.

At the Europa bar, around the corner, José Antonio introduces himself and says that he is a neighbor of the conflictive block. “We are between one and the other,” he excuses himself. He “is not a racist” (he says that South Americans work at the bar), but he complains of civility problems among the young people in the hospital. Other patrons begin to speak of attempted robberies. Outside, María and Daniel, 16, are at one of the corners of the square, smoking in quick puffs and observing those present. “This demonstration seems wrong to me,” says María, who has heard of robberies in the neighborhood. Daniel agrees. Another friend complains that foreign minors ask him for cigarettes and paper “in very bad ways.” A third says that his father was robbed. The choirs next to him continue: “No human being is illegal.”

“Young people do not yet have the training to have criteria,” Carmen abounded, who has seen a direct relationship between the loss of modesty of the neo-Nazis and the electoral rise of Vox. Miguel, the engineer, also links the deterioration of public services and the problems of coexistence, that the minors taken in have no alternatives as soon as they reach the age of majority. He also tries to provide context: “There are people with a razor and there are ‘Rodrigos Ratos.”

The demonstration lasted for an hour without incident and with a heavy police presence, with officers flanking the ends of the park and numerous patrol cars and vans waiting. At the end, a manifesto was read in which it was warned that “the nenoazis pretend to be victims” and that “fascism has been growing” in San Blas. “This has always been a very quiet neighborhood,” says Carmen. Felix, the Galician, de-dramatizes: “This is something specific.”