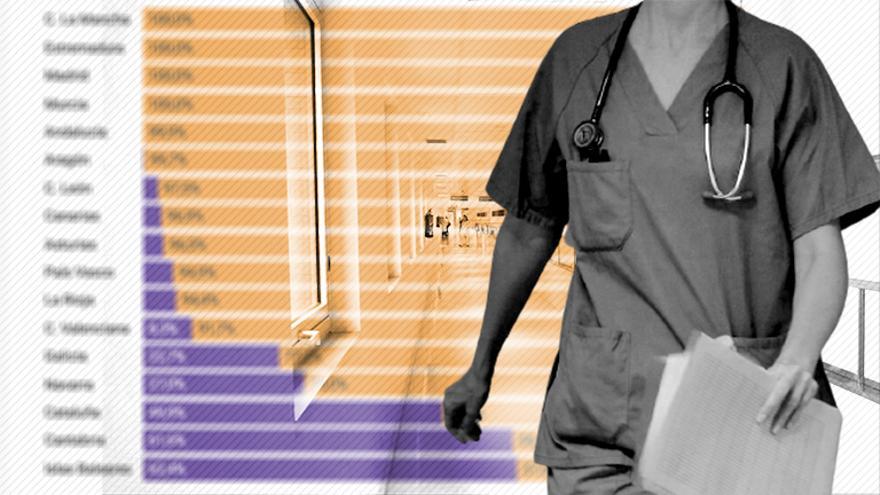 “I am not an objector.” The words spoken by several gynecologists from different Spanish public hospitals collide with the argument that some centers and entire autonomous communities usually use when asked why they do not assume abortions in public health. Currently they only account for 15% of the total and up to four autonomies, Castilla-La Mancha, Extremadura, the Community of Madrid and the Region of Murcia, do not report any in public centers. And they refer, even women who request it for medical reasons, to concerted private clinics. The reality, however, is that there are professionals willing to perform them, some even did them years ago, but in their hospitals they stopped doing it for no apparent reason. And they do not believe that they are few.

“It is assumed that the entire service is an objector, in some way it is taken for granted, except in very few hospitals where the head of the service has wanted to do it. And it is not true that we all are, I am not, but Nobody has asked me, “explains to elDiario.es María, a gynecologist who has worked for years at the Getafe University Hospital in Madrid, and who prefers to appear under a fictitious name. In the team, he assures, there are a few professionals who are in the same situation, publicly willing to carry out “at least” those interventions that are required because the woman has decided to do so after having a diagnosis of risk to life or death. health or serious abnormalities in the fetus.

This was the case of Marta Vigara, the geriatrician who denounced in Cadena Ser the refusal of the San Carlos Clinical Hospital to perform an abortion despite the difficult fetal prognosis she had. They are a minority; 90% of pregnancy interruptions (IVE) carried out in 2020, according to HealthThey were at the woman’s request, but not admitting them to hospitals is “especially serious”, María believes. “Much of what happens with this issue is outrageous, there are still many obstacles in general, but in these cases we are making the diagnosis and then we expel women from the system. It does not happen with anything else that we do.”

MLL works as a gynecologist at the Infanta Leonor University Hospital, in Vallecas (Madrid), where the practice of interruptions is not systematically accepted either. “We have only done a few, very few, in which the mother’s life was at risk,” says the doctor, who has expressed her predisposition in the service. The why is something that no one has been able to explain clearly. “In the service there are people who object and people who are not, it is not a problem. It could be done by organizing ourselves. I think it has more to do with the fact that neither the heads of the service nor the managers sit down to think about how to find a solution to this situation, it is more comfortable to look the other way and not complicate things, “he laments.

María Llavoré, a midwife who has worked since 2005 at the Sant Pau Hospital in Barcelona, ​​under contract, still remembers the words her head of service told her almost ten years ago: “María, there is nothing to do, it is not our decision, don’t waste more energy. ” It was 2012 and the center stopped doing terminations of pregnancy for medical reasons without explaining the reasons to the staff. “There are those who say that due to pressure from the Church, I do not know if for economic or moral issues, but it is clear that whoever is above does not agree with abortion,” Llavoré tells elDiario.es.

Now these interventions are diverted to another public center in the city, but today many professionals continue to demand recovery of the activity, according to advanced Public. This is the case of Llavoré, who points out “the silences” that arise every time she talks about the subject, and also of Anna Olivella, a gynecologist at the center currently on leave of absence. Regarding conscientious objection, both point out that in their hospital they had already been done for years and this problem did not exist. “Now those who are being objected are the institutions. It is a right and something that has been legal for years, it is unfair for women,” denounces the midwife.

Olivella agrees with her partner. “I am not an objector and never have been,” she says. The doctor believes that this “disinterest” has to do with the fact that abortion is a right that concerns women, to which “their backs are being turned”, and demands “a health care that incorporates the gender perspective, because everything what has to do with us does not generate so much interest or research. ” The doctor believes that it is important that public health assumes abortions, but also demands “endowment, training, spaces enabled and sufficient resources” to carry out, above all, those that occur at the request of the woman, which are the immense most.

This is also referred to by María, the gynecologist at Getafe Hospital, who fears the consequences that all IVE may have in hospitals without having undergone a prior “deep” process. “It happens a lot in politics and in health that something is announced and then there is no plan behind it. I believe that not only non-objectionable professionals are needed, but also resources and preparing the entire system for it”, believes the gynecologist.

The Burgos University Hospital (HUBU) has recently embarked on the opposite path to the Barcelona center. Abel Renuncio works as a gynecologist there. Just at the beginning of summer, his team requested the Ministry of Health and the Junta de Castilla y León for the relevant accreditation to be able to carry out voluntary interruptions of pregnancy. The idea is to start with the pharmacological ones and also incorporate the surgical ones – the law establishes that the method must be left to the woman’s choice – and end the situation experienced by women who request an abortion in Burgos, and thousands of others in Spain, forced to travel to another province to exercise their right. In this case, to a concerted clinic in Valladolid, 130 kilometers away.

The process began in May, when Modesto Rey was appointed Head of the Gynecology Service, who among the projects he wanted to implement “included the provision of voluntary interruption of pregnancy,” explains Renuncio. The precedent is in the Hospital de Miranda de Ebro, also in Burgos, the only public hospital in Castilla y León that currently performs abortions, and in which this gynecologist also practiced. “The motivation of the head of service that we had then was key, who wanted to give a boost to this coverage. We started with the women who took advantage of article 15 of the law – serious risk to life or health or fetal anomalies – until reach out to everyone else. “

At the moment in which the health centers that have never carried out these interventions before begin to roll, believes this gynecologist, it becomes one more service. Because at present “it is loaded with stigma” and there is a kind of vicious circle: abortion is not normalized because it is not assumed in public health, but the fact that it does not do so also contributes to its invisibility.

For Renuncio, behind this reality there is an “enormous lack of will” and assures that conscientious objection, which is the right of doctors to oppose a practice that is legal for ethical or religious reasons, is not widespread in the services . “There are cases, of course, but the argument that they are all objectors is not real, it has more to do with the fact that there is no will to clearly know what is happening in hospitals, with how many professionals are there to actually start this provision is taken for granted and is not asked. ” The doctor believes that this “more passive” way of obstructing access is complemented by “another more active” that also occurs.

It refers to heads of service and hospital directorates (and even governments of autonomous communities) who “ideologically” oppose the voluntary interruption of pregnancy. “It is known that there are some hospitals in which this occurs, which are very conservative and are directly against it,” says María about some centers in Madrid. However, the abortion law is clear in this regard: conscientious objection cannot be collective, it is an individual right that whoever exercises it must state “in advance and in writing” so that “access and the quality of care of the provision does not may be impaired “.

The reality is that these data are not collected, confirm all the professionals consulted for this report. In order to oblige the Administrations to have clear information in this regard, the Ministry of Equality plans to create registers of objectors in the style of what is already included in the Euthanasia Law. It will do so within the framework of the reform of the regulation, whose first draft the department headed by Irene Montero expects to have in December, as announced by the minister, which described as “urgent” the modification of the law to take a further step in the regulation of conscientious objection and prevent it from hindering access to abortion.

Tags: abortion, asked, gynecologists, no, nobody, they object