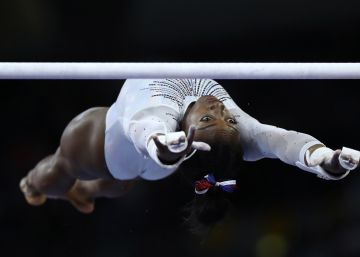 Simone Biles It is a world of any gymnast. Of his rivals, which he has submitted to absolute dominance since 2013, and even of the legends of this sport that he has already surpassed at least with the numbers in his hand. The American gymnast has achieved her fifth absolute world title on Thursday in Stuttgart, something that no woman had achieved so far, her 22nd World Cup medal, only surpassed by a legend of this sport like Vitaly Scherbo, who only has one more. The 16th gold. She has done it with an improved version of herself, with that ultra-risky program that places her two points above all the others before starting, more relaxed between exercises and as spectacular as ever.

The gymnastics party has ended with Biles on the ground, his most spectacular exercise, the same in which he performs that triple-double that makes it unique and with which he has broken the barrier of his sport to become a world star more Beyond the Olympic Games. The American premiered the risky acrobatics in summer but had to run it in a World Cup to officially enroll it in the Score Code. He did it the first day and has repeated it in the two finals he has played so far. Although less accurate than in previous days – such was the momentum that had been removed from the tapestry – I already knew that I could even fall and would be world champion again. He needed just over 12 points and has achieved 14,400.

Biles is a totally different gymnast than the rest. He is strong, very coordinated and has a precise technique that allows him to execute exercises that other gymnasts cannot even dream of. In the final of this Thursday he has distinguished himself from the first moment. While the other five best gymnasts of the classification opted in jump for a Yurtchenko with double pirouette, she decided on that Cheng that is six tenths more valuable and that allows her to fly higher and further than the rest. And mark distances.

The Olympic champion has been expanding her distance on each device to leave her at the end in just over two points. The silver has been for the Chinese Tang and the bronze for the Russian Melnikova.

The program of the explosive gymnast of Texas, in the hands of a couple of years of former French gymnasts Laurent and Cecile Landi, is perfectly designed, taking full advantage of their physical conditions and the Score Code. But it also improves every year. Yes in the Doha World Cups 2018 introduced a new jump in the colt and improved its exercise of parallels, its weakest test, this year has decided to amaze the world with two stunts that no woman had ever executed: the double-double (double mortal grouped with double pirouette) to get out of the bar and triple-double (the same but with one more turn) on the floor. In the final of this Thursday he has dispensed with the exit of the bar, because he does not need to win and perhaps to show the International Federation his disgust for how they have valued the difficulty of that element.

But in addition to an amazing and entertaining program for spectators, for connoisseurs and for those who are not so, with the Landi at their side Biles has gained confidence. Doha's failures have been banished and Biles has managed to complete its four devices only with slight inaccuracies. It has also matured. At 22 he lives on his own and is aware that he has a power that no gymnast has ever had. He raised his voice when the scandal of sexual abuse in American gymnastics, He recognized himself as a victim, and since then he speaks every time he thinks it should be heard.

Biles has been proclaimed world champion five times. It could have been six if he hadn't given up the 2017 World Cups to take a break after the Olympics. Only the Japanese Uchimura surpasses him, absent from Stuttgart due to injury and who has six victories in his medal winners. Neither Nadia Comaneci, nor Larisa Latinina, Korbut or Tourischeva went so far.

"I never think of myself as a star, even if I hang that tag," he told reporters before the competition started in Stuttgart. "I don't pay attention. What I try is every year to be better than the last. ” This has already been achieved. Next year the Tokyo Games await you.

Cintia Rodríguez has so far been the best Spanish in the Stuttgart World Cups. The only one that has qualified for this individual final, the first of his life in this competition. After a good exercise on the ground, leisurely and beautiful, in jump and in parallel, he has failed in the balance bar and finished in 21st position.

The Mallorcan is a veteran of the team. He debuted in a World Cup in 2010 and, at age 24, has become a pillar, but had never managed to qualify for a grand final. Trained by Pedro Mir at the Xelska Club of Palma de Mallorca and a student of distance Criminology, the world of gymnastics is known for its elegance and has gained security by competing in the Italian and German leagues.

The first day of the competition he managed to overcome Ana Pérez (the only Olympic in Rio 2016) and Roxana Popa, who will have his chance next Sunday in the final of the ground.

Despite the disgust of the last device, the Stuttgart World Cups are a success for her. For the final lived and because the team has managed to qualify for the Tokyo 2020 Olympic Games. He was absent since Athens 2004.

Valencia CF: Maxi Gmez is already an idol of Mestalla