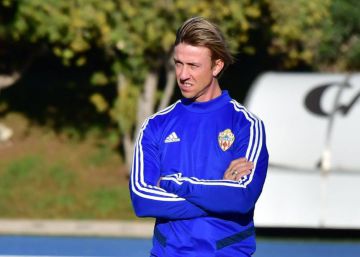 The purchase of Almeria by Turki Al-Sheikh He revolutionized the city and the Andalusian club this summer. Three months later, this Saudi sheikh has invested 17 million in signings and fired two coaches. The new one is a soccer classic, José María Gutiérrez Hernández, Guti, who faces his first adventure as chief technician of a professional team. The club made the news at dawn on Tuesday through social networks and with an image of the movie Batman, with 14 flying over the Mediterranean Games stadium, the number Guti wore at Real Madrid.

The news of the dismissal of Pedro Emanuel surprised the players of the Almería squad on Monday. The team worked normally in the afternoon and the Portuguese coach had directed the session. Everything that happened afterwards amazed football players and fans, although not so much the media and collaborators of the owner of the entity. Even the word spread among the intermediaries that Turki Al-Sheikh had considered and to do without his coach if the team did not beat Extremadura on October 27. Almeria won 3-2 and Emanuel saved the post. But the owner, with a mentality very different from that carried in European football, had already decided to replace the coach despite the fact that Almeria is second, in a position of direct ascent to Primera although he has only won one of the last eight games.

“If Guti doesn't work, he will bring another coach and so on. You have to get used to this dynamic ”, clarifies a player agent. History certifies it. Turki Al-Sheikh does not hesitate to make decisions that in European football are quite extravagant. Thus, the Saudi leader bought the Egyptian team of Pyramids FC and in the first in charge of this entity changed coach three times in just seven months of management. He also changed the city to the team itself in a way to bring the entity that was a real revolution in Egypt.

The bet now is Guti, who at 43 years old has only trained Real Madrid Youth, with remarkable success, and a course as an assistant in the Turkish Besiktas. The Madrid is a symbol of the white team, where he spent almost his entire career as a player. Product of the quarry, debuted in 1995 with Jorge Valdano on the bench of the white club. His entire career was surrounded by a controversial halo. The Bernabéu adored or despaired with him. His precious but little sacrificed style could put the stadium on its feet or turn it into a kettle of pitos. That never seemed to matter to Guti, who changed neither his personality nor his way of playing.

That irregularity made him never settle as an undisputed holder. With Cappello, Heynckes or Toshack just appeared. He had to be with Vicente del Bosque, the man who knew him since childhood, with whom he settled. In the 2000-2001 season, Guti stood out as a forward next to Raul scoring 14 goals, his best figure by far. In the following years, the player alternated his original position, the midfielder, with that of the attacker, which assured him a good number of minutes. The great but of Guti is that he never played a Champions League final. In none of those that Madrid won at that time (1998, 2000 and 2002) could even dispute a minute.

That of Torrejón stretched his career at the Bernabéu until 2010. By then he had already delayed his position and was a midfielder. Despite playing less and less, he still left details of supreme quality such as Riazor's heel, when he gave a goal to Benzema being able to define before the goalkeeper. A gesture that defines quite well who was and is Guti.

After leaving Madrid, he wanted to try in other leagues and signed for Besiktas, where he completed a good season and just started the second. Years later it began his journey as a coach in the white quarry, taking charge of Juvenil A. Guti got a great performance of 17 and 18 year old boys and in his first season he won the League and the Cup of the category. In the summer of 2018 the coach left Real Madrid after the club did not trust him to lead Castilla.

Now he assumes the challenge of Almeria, second ranked in Second and whose owner wants to see the elite as soon as possible. He arrives at a locker room that was delighted with the forms of Emanuel, a discreet and quiet coach, who built Almeria from the defense and made unpopular decisions among the property. For example, do not make holders of many of the owner's millionaire signings, cases of Appiah or Darwin Núñez. For the first, Almeria paid almost nine million to the Nottingham Forest. He has only played four games and has not scored a goal. For Núñez he paid four million to Peñarol and nothing more has made a goal in four games. Emanuel made a block with the players who were already in the squad, in the case of René, De la Hoz, Corpas, Núñez, Romera or Martos, giving entry to the signings that did respond to him in training and matches with his good performance, case of Maras, Lasso or Vada.

Emanuel terminated his contract in good tune, because he is a rope technician of the owner and knows his way of working in football. The new one, Guti, saw the Almeria match in Oviedo on Friday with Turki Al-Sheikh and closed his contract in Saudi Arabia. By the owner's house, who loves to talk about football, technicians such as José Mourinho or Quique Setién have paraded, among others.