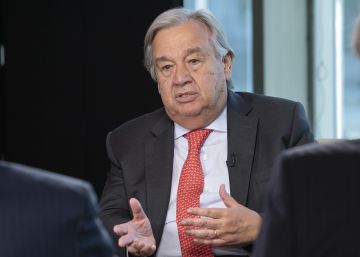 In the cafeteria of the headquarters of the United Nations Organization (UN), in New York, you can find containers and utensils of cardboard, glass, paper, wood or metal. For four months, however, plastic has become material non pleasing. How could the institution put itself at the head of the demonstration against the climatic emergency and then throw daily quintals and quintals of plastic in the trash? Something like that, moving from saying to fact, is that what the secretary general, António Guterres, claims to political leaders in the Climate Summit which is celebrated next monday. “The objectives are very difficult, but possible, what we need is political will. It does not exist yet, but I see public opinion and radically committed youth increasingly strong, ”he said Tuesday in an interview with Covering Climate Now, a global consortium of more than 250 media to strengthen information coverage on the climate.

The individual water cartons that will be drunk during the conversation have the plastic closure. Indeed, the objectives are difficult. António Guterres (Lisbon, 1949) seems aware of this and also that countries do not usually react in time or in a coordinated manner to common challenges, tanned as it is after a decade as United Nations High Commissioner for Refugees and after seven years as prime minister of a member country of the European Union, Portugal. With the weather, he relies on popular pressure as a catalytic force. “Sooner or later, governments always follow public opinion, in all parts of the world. We must continue to tell the truth and trust that political systems, especially democracies, will end up fulfilling what people think is necessary, ”he says.

The UN has black-and-white what those needs are. Among other goals, it proposes the reduction of 45% of carbon dioxide emissions in 2030 and, for 20 years later, in 2050, carbon neutrality, that is, that the amount of emissions does not exceed what they can absorb, by example, the forests. Thus, the impact is zero, neutral. "Bring plans, not speeches," Guterres has demanded from the leaders before the climate summit. Participation between 60 or 70 is expected and everyone has been asked, as a requirement to speak in plenary, to commit to any of the objectives. But every unfulfilled plan stays in a mere speech, and the experience after the Paris agreement against climate change, signed in 2015 by almost 200 countries, he realizes it: emissions have increased and the most powerful country in the world, the United States, has denied it.

The factor of change, Guterres insists, is the civil movement. “I want the whole society to pressure governments to understand that they must go faster, because we are losing the race, the consequences of natural disasters are increasingly devastating,” he warns, just returning from a trip to Bahamas, where he has was able to check the impact of hurricane Dorian. "Nature is angry," he emphasizes, "and you can't play it with nature, because it hits you back."

When he assumed the UN headquarters, on January 1, 2017, Guterres placed the battle against climate change as one of the main pillars of his mandate. Three weeks later, Donald Trump swore the position of president of the United States and fulfilled another oath: to leave the Paris Pact. Technically, that withdrawal has not happened yet, since, legally, no signatory can leave it until four years after the treaty has entered into force (November 2016), which leaves the final slam for November 2020. Just after American presidential elections. The political decoupling of the United States, However, it has already meant a machete.

Guterres, politician and diplomat, avoids direct confrontation with Trump. "It would be much better," he admits, that the United States was committed, just as certain countries in Asia "stopped exporting coal plants." But he clings to optimism: “We see a lot of action from states, cities and the American business community that is producing many results. At the summit we will have a governor of a State (Maine) and very important businessmen … The experience is that governments sometimes arrive later than public opinion, but they end up changing, ”he says.

The growing concern reflected in the polls, the big demonstrations and the appearance of youth icons like Greta Thunberg they are occurring in a context of strong political polarization. The battle of the climate has not escaped the partisan struggle: while conservative forces question the emergency, the progressives have turned it into a flag. Are you worried? How to return the conversation to the field of science and sustainability? "The polarization is not as strong in the climate as in other matters, such as migration, for example," says Guterres, "there are conservative forces that are very radical, also radical against climate action, but there are also more and more conservative forces who understand that climate action is a part of their policy. ”

“You cannot make the division between traditional left and right, especially in Europe, among those who are in favor or against climate action. More and more I see the right-wing parties in Europe with a great understanding of the need for this action, ”he insists. In fact, it highlights the rise of environmental parties in recent elections and how only three European countries – Poland, Hungary and the Czech Republic – have opposed the objective of carbon neutrality in 2050.

Without entering into direct assessments of any country's political proposals, the UN Secretary General welcomes the momentum of economic transformation plans towards more sustainable models. Many of them have been baptized with the brand rooseveltiana of the Green New Deal, as in the United States. There is a sharp criticism of frequent criticism of these programs: they are very expensive and more gradual approaches are necessary. “What is the cost of natural disasters that are occurring? The biggest cost is to do nothing, ”he emphasizes. Guterres defends the impulse of fiscal reforms that favor change: “If we put a tax on coal and lower taxes on people's income, everyone wins, the middle classes benefit more than anyone else. You can propose a green policy that at the same time obtains the support of the electorate ”. "Who pays fossil fuel subsidies?" He continues. "We, who are the taxpayers, and I don't want my tax money to increase the devastating action of the volcanoes or to end the glaciers."

Of the risks, he insists, we no longer have to talk in the future tense, because “July has been the hottest month in history, we have five years of temperature records, the concentration of CO2 higher… ”“ The last heat wave in Europe killed many people, especially older people, ”he warns. "We must make people understand that there is a climate emergency today, that the problem of climate change is today, that public health is threatened today, that the sea is rising today, that temperatures are already causing very serious problems" .