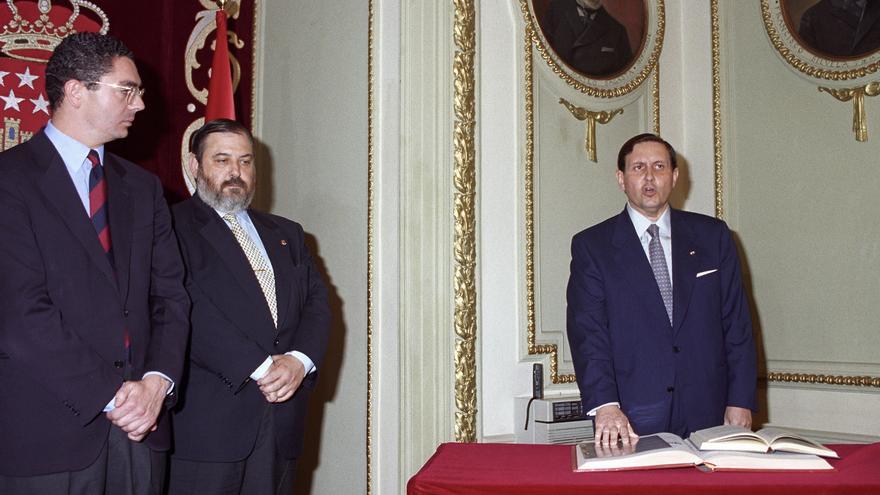 Gustavo Villapalos, historical rector of the Complutense University of Madrid and who was also a counselor for Education in the community with Alberto Ruiz Gallardón (PP), has died at the age of 71 in Madrid, as reported by the UCM in a statement. Villapalos was professor of History of Law and Institutions, then dean of his Faculty and later rector of the university between 1987 and 1995, of which he used to say: “I owe everything I am to her.” In 1995 he went on to direct Madrid Education until 2001, from where he gave shape to Gallardón’s desire to create a new campus in Madrid.

Thus, Villapalos was the Minister of Education when the Rey Juan Carlos University was launched in 1996. Close to Alianza Popular, from his years in the Complutense, Villapalos forged a relationship with the former president of Madrid Cristina Cifuentes, at that time a worker at the center, and the Urosa brothers, all names who campaigned for him to reach the rector of the UCM and that then they would all sound together again when the Cifuentes Case broke out at the URJC, revealed by elDiario.es. The relationship between Villapalos and Cifuentes was credited by Alfonso Merlos in his book on the former president, Sin Ataduras: he was first her teacher, “and then he will be her friend.”. Also his professional partner: Cifuentes was spokesman for the PP in Education in the Madrid Assembly when Villapalos was a counselor in the field.

The Rey Juan Carlos University was created there. The first years of the University, when Villapalos was the counselor, were turbulent, with constant changes of rector every so often. Striking was the case of Rogelio Pérez Bustamante, who was expelled after a brief stint in the rectory because, according to him, he had lost the support of Villapalos.

The incorporation of the Ramón Carande Legal Studies Center, which belonged to his former university, to the URJC, also dates from this time, and from which almost all the protagonists left with the support of Villapalos, who would later monopolize the press headlines in the case of the master’s degree. with forged notes from Cifuentes. The Urosa brothers came out of Carande, who saw their support for Villapalos rewarded to be rector when he reached the council. One of them became general director of the Community Youth and later would make a career with Ana Mato in the Ministry of Health.

University workers attribute to Villapalos a great power in the URJC in these early years: “Urosa moved everything. Who went to the URJC, who did not. The professors said: ‘Here, what Urosa says, which is what he says Villapalos, “says a former employee who went through that process. The circle was closed when King Juan Carlos invested doctor honoris causa to Villapalos in 2014 when Fernando Suárez was the rector. Suárez had also left Ramón Carande.

Villapalos was also a doctor honoris causa by the University of Paris-Sud XI, by the National Autonomous University of Mexico, by the Saint Louis University, in the United States and by the University of La Plata, in Argentina. Villapalos was also a member of the Royal Academy of Jurisprudence and Legislation, a counselor of the Caja de Ahorros de Ronda, a corresponding member of the Portuguese Academy of History, president of the Fundación Laboral del Fénix Mutuo, and was part of numerous international historiography societies. and History of Law, such as Gorres Gesselschaft, from Germany.

The former rector had a special relationship with Almería due to the fact that his mother was a native of Purchena, which led him to turn the province into the usual headquarters of the summer crusaders of the Complutense. With strong religious convictions (“the only immutable thing is God and geometry,” he said), he became a town crier for the Virgen del Mar in 2003. For all these reasons, Villapalos has named streets and public spaces in the capital Almería, in Roquetas. and in Purchena, according to La Voz de Almería.

His religious convictions also led him to sign an agreement with the archbishopric of Madrid, during his tenure at the Complutense, to increase the presence of Catholic chapels and oratories at the university.

Gonzalo Ugido, who was director of Communication of the Complutense, has written about him that “if the characteristic of great intelligence is the ability to use the brain handling two contradictory ideas at the same time, Gustavo Villapalos possessed a multi-story intelligence with a skylight “.