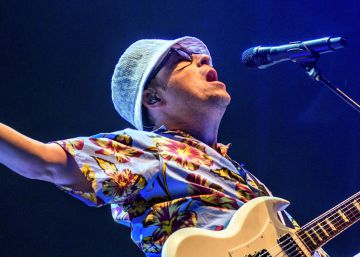 Right after the concert in the BBK Live of Bilbaoa, after interpreting the excellent Island in the Sun Y Say It Is not So, Rivers Cuomo raised the guitar like a sword and won a battle. In some way, that instrument was the weapon that reflected the strength of this alternative pop-rock group from Los Angeles. Weezer they had just shown such an excellent and dynamic guitar impulse that they had conquered an enviable summit.

They started strong: the bright and energetic chords of Buddy Holly, one of those compositions with all the hallmarks of Weezer, broke the night right after the uneven concert of The Good, the Bad and the Queen. Hence, three other glittering gems like Undone, Holiday and The Good Life. They thundered with a contained rage and an outstanding precision, the same ones that have made them famous in the independent scene of the United States since the mid-nineties in beautiful and absorbent discs that are known for their colors, such as blue, green, red and white, the latter published three years ago, and that was better than the last Pacific Daydream, published in 2017.

It would be good to know what they inject to the guitars these guys that move in an imaginary border between Pixies and Big Star. It's as if the instruments had superpowers. Since they assault the first chord of any of their songs, they sound like a stampede of wild horses. There is no one to stop them, but they also give it a hymn character. When you're inside songs like My name is Jonas, that last night it sounded halfway through the performance, with that swirl of electric guitars surrounding you, it's easy to believe that you can get anywhere, to impose world peace or whatever goes through your head in that state of pop alienation. Pop, that word, that concept, that illusion, that musical genre that, in the hands of Weezer, is something with a blood supply of rock and with so much hook to feel that it never leaves you.

Help Cuomo's falsetto voice to achieve that drama in his songs. Sometimes, as in Pork and Beans, It is as if he were a Frank Valli of power pop, a voice as whiny as playful, that intensifies the emotional prints. It is recreated in sentimental corridors that converge in the instrumental roll of the group until shaking in the heights. In that cusp sound is essential, apart from the talent of Cuomo, the work of rhythm guitarist Brian Bell.

Dressed in a colorful floral shirt and beach cap, Cuomo seemed to come from an all-inclusive of Punta Cana rather than show himself as a rock star. Nor has he ever aspired to it, even if he is a somewhat enigmatic artist. What this kind of strange charisma has always aspired to is to reflect states of happiness and pop melancholy, indistinctly. its look He almost seemed to say that it was summer season at its best, a summer that is stored in his music of brilliant and blinding melodies. In that atmosphere of pop perfection, it was a party when they played Happy together of The Turtles and, with everyone dancing, they returned the promise of perpetual agostos. The chaos was greater when they surprised with more versions like Africa of Toto or Take on Me of A-ha, the latter sung by half festival in the choirs. Cuomo beat his chest while asking for the complicity of a cross audience.

Less successful was the performance of The Good, the Bad and the Queen, the project of Damon Albarn, ex-member of Blur, along with Tony Allen, drummer of Fela Kuti, Paul Simonon of The Clash and Simon Tong de Verve. Although they went from less to more, they did not reach the necessary strength to go out the big door. In this supergroup, Albarn spends more time at the piano, but the set sometimes stays somewhat flat. Only in the final straight of a decaffeinated performance was an intensity more than remarkable. It was at the closing of the song The Good, The Bad & The Queen.