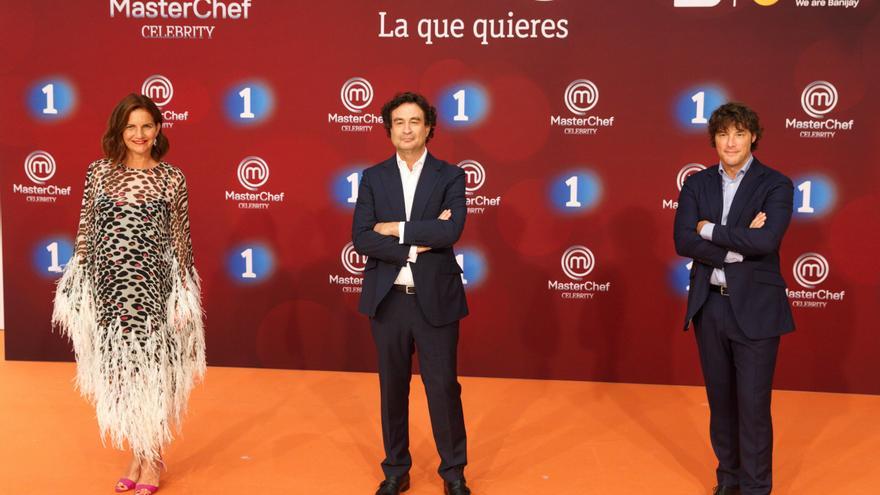 After shining in the final duel Guillem was proclaimed winner of 'MasterChef Junior 9' in a final determined by avant-garde and traditional cuisine with the presence of the renowned chef, Eneko Atxa. A program marked by the decision of the producer of delete the scenes in which Verónica Forqué appeared.

The 12-year-old boy, who was awarded a 12,000-euro scholarship to continue his training and a four-day cooking course at the prestigious Basque Culinary Center, took the title after showing off in a more serious and formal final than the programs previous editions of this ninth and short edition. The public television station decided shortly afterwards to eliminate the appearance of the recorded images of Forqué as a guest in 'MasterChef Junior'and in' Masters of Sewing 'after his recent, but above all, controversial death.

After analyzing it, Televisión Española agreed to eliminate the scenes in which the actress participated, who participated in the last edition of 'MasterChef Celebrity 6', and that took his own life on December 13 at her home in Madrid, due to the numerous criticisms that both the public channel and the program received for an alleged inadequate display of the actress's image, a decision that some viewers have reproached on social networks, adding that leaving their images would have been a "Great tribute." "Do not go unnoticed the great use of scissors of the video editor to make disappear Veronica Forqué”Wrote others via Twitter.

In this ninth edition, the production company also decided to return to the trend of its initial programs since, instead of having six programs as usual, they have been reduced to four coinciding with the end of the Christmas holidays.

A journey through history

The night began by traveling to Ancient Egypt, in whose showcase the ingredients that were already used in the time of the pharaohs were hidden and that the four finalists would integrate into their dishes during the cooked. In the first test, the four finalists, Olivia, Carla, Guillem and Ariel, had to 'Follow the Chef' to reproduce a dessert by chef Martín Berasategui (three Repsol suns and twelve Michelin Stars), cooking at the same pace as him.

The first test, marked by the great performances of Guillem and Carla, and with Olivia and Ariel totally lost, ended with the Catalan achieving the first jacket of the night. As a result of his great skill and the praise of the jury and Berasategui, Guillem with his plate 'Thanks to Berasategui', achieved a direct pass to the final duel. "I have not seen anything like a boy so young and hit the target as well as you have," valued the multi-star Basque chef on the Catalan candidate. “You have worked as you had to work, you have helped your colleagues as it should be. I already see a real cook in you, ”Jordi told him, an opinion shared by the rest of the jury,“ it's a dish of an older person, ”added Samantha, before putting on the duelist's jacket, a victory that she dedicated to her entire family .

Battle for the last jacket

While Guillem had time to get psyched up for the final duel, the aspiring girls faced a new and demanding outdoor test that was carried out at the Compartir restaurant in Cadaqués (Gerona), based on a menu designed by the trio of chefs Oriol Castro, Eduard Xatruch and Mateu Casañas, owners of this restaurant and of Enjoy in Barcelona. Each contestant would prepare two dishes that would later be tasted by eleven of the contestants from the latest edition of 'MasterChef Celebrity'.

Carla, being the second classified in the previous test, was the first to choose dishes opting for sardines marinated with raspberry, beet and pistachio; and red mullet with suquet puree. For her part, Ariel chose the starter, an envy salad with gorgonzola cheese and a fourth plate consisting of razor clams with a mushroom and pine nut vinaigrette. Finally, Olivia carried out, on the one hand, the crab with avocado and trout roe, and, on the other, the dessert, banana with yogurt and cocoa biscuit.

After 180 minutes of testing and the advice of the cooks, the jury proclaimed Carla as the second duelist of the night. “Not only have you faithfully reproduced the dishes, but you have also been able to do it so quickly that you have been able to help your friends. Congratulations, you work like a grown-up person ”, Pepe acknowledged to the Lleña citizen.

Guillem and Carla, the duel for the final

In the third and last test of the program, tension grew and nerves flooded the kitchens of 'MasterChef'. Kitchens filled with applause and cheers from all the participants of the edition, as well as the families of the two finalists to cheer on the duelists. After 120 minutes of maximum concentration, Guillem presented a menu inspired by his land, Catalonia, while Carla did it in homage to La Mancha, especially his town, Carrizosa (Ciudad Real).

After the compliments of the jury and Eneko Atxa, and supported by his fellow editors and family members, it was Pepe, as tradition dictates, who was in charge of pronouncing the winner's name: "Guillem!"