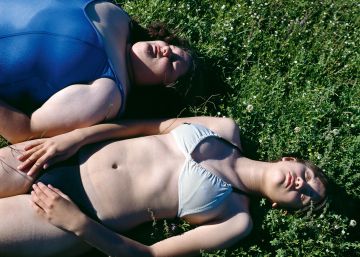 In General Guido, 300 kilometers from the city of Buenos Aires on Route 2, is the remote farm where in 1999 the photographer Alessandra Sanguinetti (New York, 1968) met two girls: Guille and Belinda. They were cousins, they were nine and 10 years old, respectively, and they grew up together in their grandparents' ranch. Day after day, through games and experiences, they would become an inspiration for the artist. "They lived in a very humble environment but for them it was a palace. I wanted to photograph that palace. Her internal world ", says Sanguinetti, who in 2007 became part of the agency Magnum and whose work is in large collections such as MoMA. Thus, an intimate and fruitful relationship was established between them, which, over 20 years, has shaped a photographic series, still in progress, brought together in two monographs, of which the British publishing house MACK has just published the second volume: The Adventures of Guille and Belinda and The Illusion of an Everlasting Summer (The adventures of Guille and Belinda and the illusion of an eternal summer).

"The first minutes after waking up - those precise moments where we leave the dream behind and the day to come materializes - are the most delicate part of the day. Those first sensations and thoughts, the first thing that one hears or reads will define what the day that awaits us will be like. And so goes childhood”, Sanguinetti writes alluding to the indelible mark and the determining character of childhood. “I liked Belinda's voice, it went from high to low very fast and she was very mischievous. Guillermina was more dreamy, very free with her body. It was pure joy to be with them and it did me a lot of good. I realized that there was a very beautiful and important story to tell. No one had told the story of the women in the field. They are invisible ”, recalls the author. The happy days marked by the dreams and fantasies of the girls shaped a poetic imagery that, intertwined with anecdotes from daily life, inspired the first part of the photographic series, The Adventures of Guille and Belinda and the Enigmatic Meaning of Their Dreams (The adventures of Guille and Belinda and the enigmatic meaning of their dreams). MACK will release a reissue of this first monograph later this year.

“I focused on the girls' dream world and as I did so I realized that it was important to let myself go through their daily lives, to show the context from which the fantasy comes,” says Sanguinetti. “If I had focused only on her imaginary universe, the work would have become one-dimensional. I considered it important to show how children move seamlessly between the everyday and the fantastic ”. Thus the project acquired a tone that navigates between realism and theatricality with the same ease with which girls change register. There is a cinematic quality in her that, nuanced by a very particular use of natural light, returns the viewer to the real world without turning off the magic, while emphasizing its degree of intimacy and poetry.

The process of photographing was back and forth. Many times the photographer proposed a game or suggested a theme to represent. A theme that young women quickly improvised and adapted to their lives. Other times they were the ones who suggested what to do to the photographer. “I once showed you a postcard of Ophelia by John Everett Millais. They were delighted, ”recalls the author. “It was winter and we had to wait for summer. It was they who then remembered 'that girl in the water'. My mother kept brochures at home with works by the great masters of painting and I remember that they caught my attention. So I also showed the girls pictures of Caravaggio and we started to represent them ”.

Sanguinetti was born in New York but grew up and lived in Argentina until he was thirty. “My work as a photographer is very intertwined with my life. At the age of nine I came across a book at my mother's house with photographs from the 19th century and I thought that if I knew about the existence of those people it was from the photographs. As soon as I realized that I was going to die I asked for a camera. My parents gave me one for Christmas and since then I have not stopped taking photos, although the role of photography for me is always changing. It began as a way of retaining time and places. Then it became more of a way of exploration, of understanding what was happening around me and finding some kind of order and meaning, ”says the artist who received a grant from the Guggenheim Foundation, as well as the Hasselblad.

It was in the countryside, where they spent the summers of his childhood, where, like the protagonists of his series, he learned “everything about life and also about death”; a stage that would determine everything he did afterwards. Her first major photographic essay,. On the sixth day, He dedicated it to exploring the harshness of the rural environment in the relationships established between animals and humans, as well as the duality between life and death. A project carried out over eight years, which was set on the farm where the girls lived. It was then that the photographer was captivated by her games. Animals are also present in The Adventures of Guille and Belinda. Sanguinetti also points to intimate aspects such as the importance of fraternity and family relationships, love and motherhood.

In the second monograph, the protagonists cross the complicated territory that goes from 14 to 24 years old; from adolescence to adulthood. A path that Sanguinetti travels with great delicacy with his camera as a witness to the transformation that young women are experiencing step by step through episodes that will completely change their lives, such as motherhood. Hence, the image in which they appear buried was the last one in which they agreed to 'play' when faced with a proposal from the photographer. "Without wanting to, it meant the end of a stage", highlights the photographer. "I never spent a long time without photographing them, although when I moved to the United States the encounters were more widely spaced," says the author. “As adolescence passed there was a stage of reconfiguration of the photographic relationship, since the three of us were going through changes that determined our relationship. What surprises me the most now is the consistency with which they followed their lives in relation to what they imagined as children ”.

“Guillermina was afraid of having a boyfriend. I asked them how they imagined growing up. Guille looked like a famous singer, geography teacher, or hairdresser "to cut my husband's hair, if I ever have it." Belinda imagined herself a housewife, living in the countryside and surrounded by cute little animals, ”Sanguinetti writes in the monograph.

Despite the fact that the photographs show us the lives of the two cousins, we really have few certainties about them. The photographer doesn't even clarify who Guille is and who Belinda is. Hence, their dreams and experiences end up belonging to a group, as part of a timeless inquiry about female intimacy, about the importance of dreams and about attachment, where beauty overcomes the harsh conditions of the environment. After all, everything is a document for this artist who shies away from categories: “Any kind of reflection of the reality of a life is a document, even if it is pure fantasy. Because perhaps fantasy is more real than reality ”.

The Adventures of Guille and Belinda and The Illusion of an Everlasting Summer. Alessandra Sanguinetti. MACK Books. 144 pages. 60.03 euros.