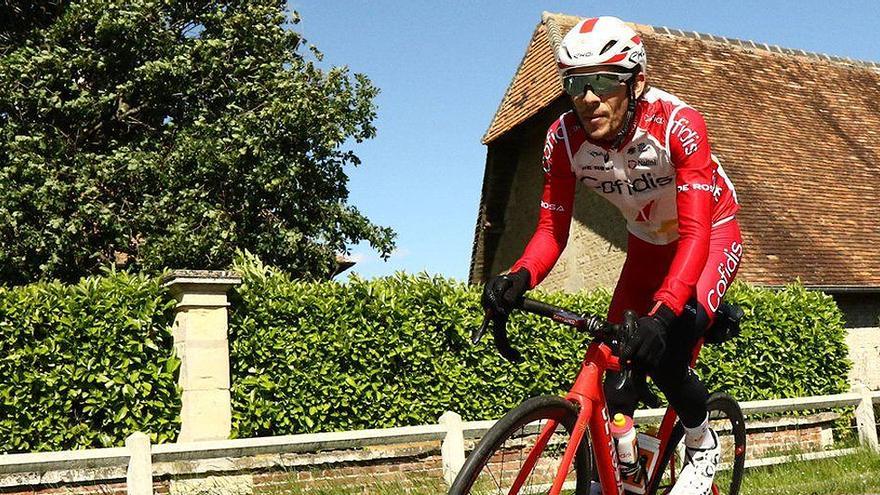 Some pedal and another thinks. Some, in the shared solitude of the peloton, imagine themselves lying with their girl on a paradisiac beach or in command of their brand new sports car while their legs suffer on the steep slope. Other, Guillaume Martin (from Paris, 1983, as Laurent fignon) is surrounded by philosophers (Nietzsche, Socrates, Aristotle, Pascal, Heidegger, Sartre...), who sweat like him while discovering that his magic potion to overcome the adversities of cycling is intelligence.

This was the plot of the first book of the Cofidis corridor ('Socrates on a bicycle', Editorial Libros de Ruta), eighth in the Tour 2021, ninth in the Vuelta, leader of the mountain the previous year. A few weeks ago Martin presented his second philosophical text 'The platoon society'. ('La société du peloton'). He had previously written a play called 'Plato versus Platoche'. The same runner who took advantage of the last Spanish round to learn Spanish. The same cyclist who finished a master's degree in philosophy at the Parisian university of Nanterre.

And has been Martin the runner that has captured the media attention in France in the pre-Christmas period, much more than Julian Alaphilippe and his title of world champion. But in the interviews that cycling has granted, it has always been a secondary issue because Martin He likes to talk about his ecological, health and ideological concerns collected in his latest book in which he compares the contradictions that occur in everyday life with those experienced within the squad.

"When you defeat an opponent in a race it does not mean that you are always better than him, but only at the moment of victory"He confessed a few weeks ago in an interview with the newspaper 'Ouest France'." Cycling is an individual sport in which we cannot do without our companions, "he justified in the same interview." Cycling returns us to our contradictions more deep. Like any society, the platoon is made up of leaders, executives, who are the captains of the route, and proletarians, who are the bearers of water ", he writes in 'La Sociedad del Peloton', not yet translated in Spain, contrary to his essay on Socrates and the rest of the philosophers or 'cyclosophers' as he calls them in 'Socrates on a bicycle '.

The truth is that Martin was formed in a world that always combined sport and culture. His father is a teacher of aikido, a Japanese martial art in which self-control is sought to defeat the opponent without humiliating him by regulating time and energy. His mother is a theater teacher. And in this environment, while studying philosophy at university, Martin grew as a cyclist to win the Liege-Bastoña-Liege sub 23, a stage in the Tour del Porvenir, mature as a professional runner until reaching third place in the Critérium del Dauphiné in 2020. Or wonder in the last Tour if Mathieu van der Poel He had done the right thing by withdrawing from the race after leading the entire peloton, without philosophers but with a 'pro' rider, with the knife in his mouth during the first week of competition.

"To roll or not to roll? This is the problem of modernity," he asks himself in a Shakespearean tone in 'The platoon society'. "At a time when global crises (ecological, health and ideological) are multiplying, are we not like that ambiguous corridor that favors its own interest?", He adds in his latest book.

In 'Socrates on a Bicycle' the irony of forcing Nietzsche to train hard to participate in the Tour. TO Heidegger sentenced him to fall into a ditch. Socrates, hence he was chosen to give the title to the book, he was at the head of the platoon already Sartre made him a French coach. Because it was after Alaphilippe achieved his first world title, with Martin as a gregarious or proletarian, when he questioned whether selfishly, although happy, everyone did not envy him because in fact each one wanted to be the true champion.