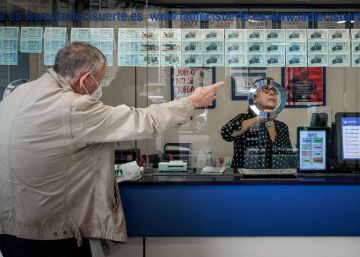 “Share as always. Share like never before ”is the motto for which Loterías y Apuestas del Estado has opted for this Christmas raffle campaign. The slogan, similar each year, responds to the traditional practice of dividing the tenths between friends or family. According to a survey conducted by Ventura 24, a company specialized in lottery management, 75% of Spaniards share their ticket with third parties. However, this practice has triggered numerous legal conflicts when the ticket is awarded and one of the participants decides to skip the agreement and keep the entire prize. So, what steps must be followed to share a tenth safely?

First of all, it is essential to make clear who the buyers are and what percentage corresponds to each one. The best thing to do is to do it in writing on a piece of paper where the fees for each one are specified and their signatures are included.

In this sense, the Supreme Court ruled when, in 2019, it acquitted a woman for not distributing the money of an awarded number that she shared with five other people. The woman bought 10 tickets and gave five of them to her companions. The dispute arose because one of the tickets, held by the defendant, won the extraordinary prize for the fraction, which amounted to 1.17 million euros. The court ruled out that it had committed a crime of misappropriation because it had not been proven that the participants “had determined the allocation of quotas with respect to the special award to the fraction.” In this sense, the magistrates recalled the importance of leaving in writing the distribution of possible winnings when acquiring lottery.

Now, in a pandemic context in which physical contact is limited, how can this process be done? One option is to leave it in writing via WhatsApp, Telegram or another instant messaging service. In this case, all buyers can create a group in which they specify the aspects related to the tenth, such as how much each has contributed, what is the percentage that corresponds to each interested party or who will be the depositary. That is, the person who keeps the physical tickets in case it is not possible to distribute them before the draw.

Photo to the tenth

The best thing is to put this information on a physical paper and send a photo to the group, and that the participants confirm that the content is correct. Likewise, it is advisable to send an image of the lottery ticket (or several if more are shared) in which the serial number, fraction number and price can be clearly seen. In this line, it is advisable not to delete the messages or photos, nor to leave the group until the prize has been collected.

Another way is to leave all these data physically in writing and send the document (as a file or as a paper image, for example) by email or other similar means to each of the interested parties. They must confirm that they agree with the agreement and, incidentally, forward it signed. It can also be helpful to include the date.

Carrying out these types of procedures is essential in all circumstances, even if the lottery ticket is a gift. In this sense, a sentence of the Provincial Court (AP) of Segovia in 2003 that analyzed the conflict that arose between the staff of a restaurant after one of the clients gave them a tenth is striking. The number was awarded 180,000 euros and the eight waiters wanted to divide it only among themselves. The four cooks of the premises, however, went to court to claim their share.

The Court agreed with the latter after hearing the client’s testimony, who clarified that his intention was to have a detail with “all the establishment’s staff”, which, for the judges, included all the restaurant workers.

One element that can be of help in a possible litigation is to have witnesses who certify that the interested parties actually share a number. You can even be present at the time of distribution to attest what percentage corresponds to each one.

In fact, the courts have relied on the testimonies of third parties on several occasions. An example was a ruling by the AP in Madrid in 2015 in which it agreed with a woman after her ex-partner refused to give her half of the Gordo’s 300,000 euros, despite the fact that they bought the ticket jointly. On the day of the draw they were still together and, in fact, went to the bank together to collect the prize. However, weeks later he left her and refused to give her his fair share. The Chamber used the testimony of the bank employee, to whom they transmitted that “they had been awarded.” A plural that, for the magistrates, evidenced a “clear will to share the prize”.

Another similar case was tried by the Provincial Court of Zaragoza. On this occasion, the man separated from his wife, with whom he had been married for five years, after they won 400,000 in the Christmas lottery. Although he denied that the tenth winner was both, the witnesses said that they saw them celebrate the award together, which served the judges to condemn him to deliver the part that corresponded to his ex and, in addition, to two years in prison.

And is that not sharing the prize if it had previously been agreed is not only morally reprehensible, but it can lead to jail time. Specifically, this conduct constitutes a crime of misappropriation, contained in article 253 of the Penal Code. The penalties range from six months to three years in prison and a fine if appropriate exceeds 400 euros. If it is lower, the sanction is only financial.