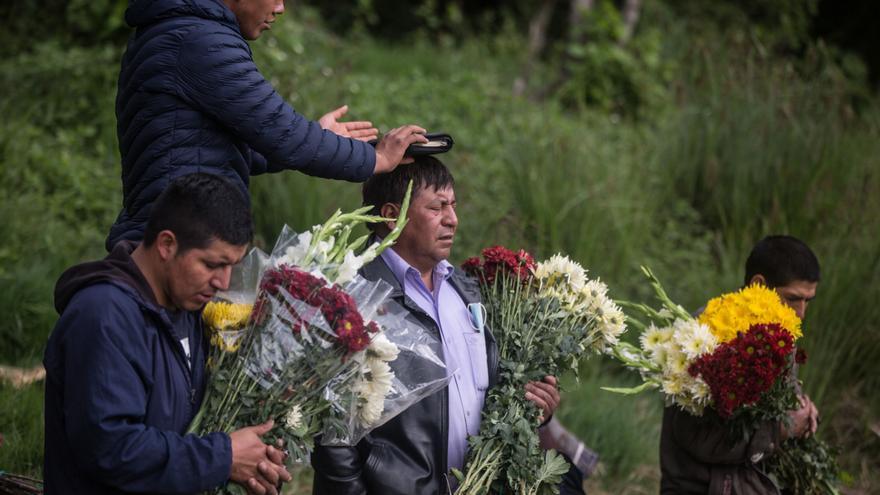 San Martín Sacatepéquez (Guatemala), May 13 (EFE) .- Dozens of indigenous Mam from Guatemala climbed this Thursday to the crater of the Chicabal volcano, located in the municipality of San Martín Sacatepéquez, in the west of the country, to carry out a prayer ceremony of the rain in search of abundance.

The activity, which takes place every year 40 days after the end of Holy Week, takes place at the volcano located in the department of Quetzaltenango, 225 kilometers west of the Guatemalan capital.

The Mam, in addition to neighbors and tourists, climb to the top of the volcano – whose crater has been a lagoon of crystalline water sacred to the locals for hundreds of years – to perform the traditional ceremony of gratitude with Mother Earth and cry out for the rain and abundance.

One of the residents who ascended to the crater is Gilmar Pérez, a 22-year-old Mam barber from the neighboring municipality of San Juan Ostuncalco. Pérez traveled early with his large family to take part in the ceremony, to which he contributed flower arrangements as a tribute.

“We inherited the tradition from my great-grandfather. My ancestors have come here for hundreds of years. This time we ask for the abundance of rain and that this year be better than last,” Pérez described to Efe.

The barber placed the offerings a couple of meters into the pond and with his pants rolled up, he dug a hole with his machete to nail the flower arrangement. His family, likewise, prayed and lit a fire to complete the tradition.

For Pérez, the ceremony was also a gesture of gratitude for “health during the pandemic” and for not contracting covid-19, a disease that has left 7,815 people dead in Guatemala, the highest number in Central America.

THE TRADITIONS OF THE DAY

In the Mam worldview, the water of Chikab’al (good or sweet place, in Mam language) is sacred because the clouds descend to bring the essential liquid of life and then return to the sky in the form of rain that feeds the corn crops .

Therefore, this Thursday on the shores of the Chicabal lagoon, people placed several floral offerings. Others rolled up their pants or skirts and asked the lagoon for permission to enter. They placed their offerings and prayed to the Christian God or the Mayan gods that this season the rain would bless the crops and fields.

The sacred place is located 2,000 meters high in the crater of a volcano that belongs to the southern slope of the volcanic chain of western Guatemala. The location is surrounded by 20 altars, with the different Mayan “nahuales” (spirits).

Many of the believers sleep on the shore one day before praying or doing a Mayan ceremony, in a tradition in which Mayan and Catholic beliefs are mixed.

According to various censuses, around 40 percent of the 16 million Guatemalans are indigenous.