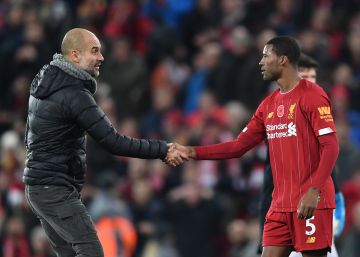 The door to the Anfield conference room opened and Jürgen Klopp's thick glasses peeked out. "It was fine, wasn't it?" Said the Liverpool coach, drawing a row of teeth below the hairy face.

The coach who led the current Champions champion is still on the crest of the wave. Unbeaten in this Premier season with 11 wins and a draw, he had just attended the demolition of his great rival by a margin of two goals, something unheard of since both are measured in the English championship. Since Klopp and Guardiola lead together in England they have faced ten times with a favorable Liverpool balance of five wins, three losses and two draws.

"If you want to beat City, which is very difficult, you can't do it playing like them," said Klopp, who acknowledged that in the last quarter of the game his team retreated to defend 3-0 and synthesize the transitions. “It is impossible because in that [the elaborate game] they are the best and it makes no sense. We had to endure and I think we have done well. We deserve the three points. ”

"The game in the first minutes was wild," he added. “All the boys did their part. We knew it was a key day. We scored two incredible goals and we had to suffer, but I think we did well until the 75th minute. ”

Regarding the two hands of Alexander-Arnold in the Liverpool area ignored by the referee and the VAR, the German coach failed to argue. "I didn't see it," he said, "therefore I can't say anything."

Pep Guardiola, very protested in the band, was restrained by the microphones: “Ask Mike Riley [head of the referees] and the people of the VAR. I am here to talk about the game. I congratulate Liverpool and Jürgen. ”

The Catalan coach said that, considering the magnitude of the rival and the casualties in his own squad, he had attended a good performance by his players. "It's one of the matches I'm most proud of in my career," he said. "We have shown why we are the champions."

"Playing like this away from home, with the losses we have and against the best team in Europe says a lot about this City," he said. “We have created many occasions and have granted little. I think it has been one of the best games we have played in Anfield. ”