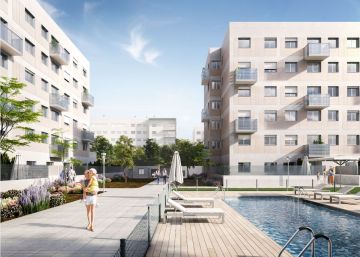 The promoter Lar Group It enters the rental housing business, a market that is attracting investors, socimis and promoters. The Pereda family company is considering creating a socimi with a portfolio of more than 5,000 homes, more than 1 billion euros investment and attract third-party investors to that company, according to company sources. The real estate company announced yesterday the first step with a project to build houses for rent in Valladolid.

The company, which celebrates its 50th anniversary this year, said it will begin during the last quarter of the year the works of its first rental homes, in this case a project of 66 houses located in the Castilian-Leonese capital, with an initial investment of nine million , in plots owned by the real estate.

This is the first promotion “of the commitment that Grupo Lar has decided to make in the rental housing segment and is part of a strategic plan whose objective, in the short term, is to reach an initial park of 500 units,” said the company , in the Valladolid land plus other residential projects in Parla and Móstoles (Madrid), municipalities where it already has land in its portfolio.

The company now looks for the formula for the investment vehicle in this rental business, which could well be a socimi. These listed investment companies in the real estate market are companies dedicated to leasing urban real estate, which fits with this activity for Grupo Lar. “There will be a vehicle owner and operator of the houses. The legal structure, socimi or similar, is in the process of being defined to find the most appropriate one, ”says a spokesman for the company.

Grupo Lar informed that at least 500 other units will be added, in the medium term, at least 4,500 units, both through new promotions and through the acquisition of turnkey assets, which will allow for a minimum park of 5,000 homes in fiscal year 2025.

For the first investment, Grupo Lar will use its own resources. However, to achieve the objective of a portfolio of 5,000 homes, the real estate company plans to go out to the market to seek capital from partners that accompany it in this bet. They explain in the company that the value of that portfolio will exceed 1,000 million.

Grupo Lar already has experience in raising a vehicle dedicated to rent from scratch. He did it in 2014 with the socimi Lar Spain, currently focused on the retail sector by owning shopping centers. In that company, the Pereda family's real estate company acts as an external manager, in addition to being a minority shareholder, since part of the remuneration for the management of the socimi is distributed through shares. Currently, in Spain, the Spanish group controls 10% and the US fund Pimco is the largest shareholder, with 20% of the capital.

The promoter thus enters a market that is becoming the new investment trend in the sector. The employer of the APCEspaña promoters and different actors such as Azora, Testa and Vivenio point out, as published Five days at the beginning of October, a demand to build 100,000 homes a year during the next decade.

Socimis have entered this segment as Head, controlled by Blackstone and with more than 11,000 houses in portfolio, and Lived (with a portfolio under construction and already in operation of 5,000 units), operated by Renta Corporación and with the APG pension fund as a majority shareholder. Other investors are also present as Lazora (vehicle managed by Azora and that has CBRE GI and Madison as main partners), the manager Ares (for which Aedas and Metrovacesa develop more than 600 houses), Axa (in this case with Acciona) or Tempore, the Sareb socimi and the TPG fund.

Draft. The company explains that the Valladolid project will be carried out in one of the nine residential plots that the company has in the Barrio de la Victoria, next to the Canal de Castilla, on a plot of 4,300 square meters. The lease prices will range between 450 and 800 euros. In addition, its common areas will have, among other services, a swimming pool, paddle tennis court and community room.

New manager The historic promoter is chaired by Grupo Lar. For the area of ​​rental housing, in September Grupo Lar appointed Jorge Pereda as director, who has previous national and international experience in companies such as Grosvenor Group, Banco Santander and

Hotel occupancy in Spain will fall to 8%, although it will remain the first option

prohibited except at dawn and without exceptions for football