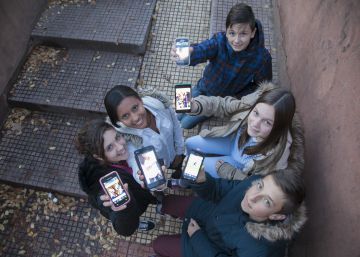 75% of young Spaniards have suffered some type of violence through the Internet during their childhood, according to a survey carried out by the Save The Children organization of 400 people between 18 and 20 years old. The generalization of the use of social networks by children and the increase in the level of exposure to new technologies have led to a rebound in violence on-line towards the minors.

"This violence is naturalized in Spain, it is believed that they are unimportant children's things, we do not have reliable data or records to measure it, we only have the complaints from the police, which are the tip of the iceberg", explained Andrés Conde, CEO of Save The Children, this Thursday during the presentation of the Viral Violence report. According to data from the Ministry of the Interior included in the study, last year there were 2,286 complaints of cybercrime against children. Conde has indicated that most of the lives of adolescents take place in the digital medium and that there is a social concern for the violence they may suffer in the network. "This concern does not correspond to the development of public policies to tackle this problem," he added.

The document details that 77% of those arrested for violence on-line they are men and only 23% women. "This violence is traversed by a gender factor," said Conde. One of the greatest danger posed by the network is the involuntary exposure of minors to sensitive or violent material. According to the report, one in two has received content of that kind. "The battle of control is lost, we have to educate the children so that they know how to use the networks and accompany them." The technologies also have very positive aspects for them, but we must teach them to manage the device that we are putting in their hands.

Save The Children has also picked up in the text the different forms of violence to which adolescents can be subjected:

It is the most common form of violence. Almost 40% of young people acknowledge having suffered in their childhood. It is an extension of traditional bullying among minors, which consists of repetitive behavior of harassment, intimidation and social exclusion towards a victim through messages, images or videos, to humiliate, insult or defame. It usually occurs between the ages of 8 and 9 and in 45.8% of the cases the cyberbully was from a school or a friendship.

It occurs when an adult contacts a minor through the Internet posing as a teenager. The intention of the aggressors is to involve a child in an activity of a sexual nature. 20% say they have suffered during their childhood. The average age of the victims is 15 years and in one of every two cases the abuser is unknown to the child. "The teenagers who suffer it sThey isolate and do not count. They lose their self-esteem, suffer depression and may even consider suicide, "said Conde.

It consists in the recording of a physical, verbal or sexual aggression, and its diffusion through social networks. The goal of these videos is to gain popularity in the network. 5.74% of respondents said they were victims. 61% of the attackers were friends or companions.

It is about sending messages or personal images of sexual content. When this material is disseminated without the consent of the minor, it is a form of violence. 3.74% of respondents say they have suffered. It usually happens at 14 years old for the first time. In one of every five cases, the person who disseminates this content without consent was a partner or ex-partner of the victim.

It is the blackmail of a boy, girl or adolescent with the threat of publishing audiovisual content or personal information of a sexual nature that involves him. 3.24% of respondents say they have been victims of this form of violence. It occurs between 14 and 15 years. In 25% of the cases the aggressor is a couple or ex-partner of the victim.

Those responsible for Save The Children have also warned about the sharenting, that is the custom of sharing photographs on the network by their parents. "This activity is not a form of violence per se, but parents have to be cautious when posting photos of their children on social networks and think that they can be used by third parties," said Ana Sastre, director of Child policy of Save The Children.

Sastre has demanded the approval of a Law for the Protection of Violence against Children that includes measures of prevention, detection, and action to eradicate this violence. "It is also necessary to specifically classify crimes of violence against children through ICT", said Sastre. "Violence is not inevitable and the government must commit itself," said Conde.

Those in charge of the organization have also demanded a greater commitment on the part of digital platforms to put controls on violent information and mechanisms to guarantee that children under 14 can not access social networks. Although they have stressed that the prohibition is not the way.