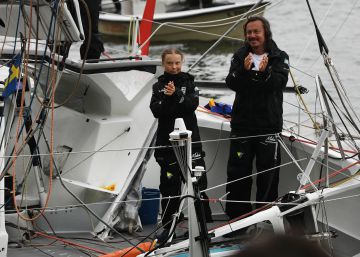 Svante Thunberg, father of Greta Thunberg, considers it “a bad idea” for his daughter to be “on the frontline” of the fight against climate change. In an interview on the BBCHe adds that he did not want the now activist to miss class hours to go to the global climate strike. However, he acknowledges that his 16-year-old daughter is “much happier” since he has championed this cause and millions of people have been inspired by it, although he is concerned about “the hatred” he arouses in others.

Greta’s father admits in the interview that the family made changes in their way of life to “save” their daughter, because she did not want to eat or go to school, and not because of the climate crisis. The Swedish teenager has become the symbol of the global fight against climate change, and has led her campaign through several countries around the world, to those who travel but never by plane, for their polluting emissions. Svante Thunberg acknowledges that his daughter had depression problems for “three or four years” before starting her school strike.

“He stopped talking, stopped going to school,” Svante Thunberg admitted to BBC Radio 4, adding that his daughter’s situation became the worst “nightmare for a father” when he didn’t want to eat. To help her, he added, he began to spend more time with Greta and with her younger sister, Beata, at her home in Sweden, while her mother, opera singer Malena Ernman, canceled contracts she had To be with the family.

It was then that Greta, diagnosed four years ago with Asperger, an autism spectrum disorder, began to manifest herself more and more passionate about the need to face the climate crisis, explained the father, who admitted that the family then began to change and take more seriously the environmental problem, like the decision of the mother of
Do not fly by plane.

“I did all these things, I knew they were the things that had to to do, but I didn’t do it to save the weather, I did it to save my daughter. I have two daughters and, to be honest, they are all that matters to me. I just want them to be happy, “he admitted.” People think she is special, and she is very famous and all those things. But for me she is a normal girl, “which, according to him, is happy now and does what any another teenager, “dance, laugh a lot, have fun”.

Svante Thunberg was worried about “the false news, about all the things that people try to invent about it, the hatred that it generates.” But he added that his daughter copes with the critics “incredibly well.” “Frankly, I don’t know how he does it, but he laughs most of the time. He finds it hilarious,” he said.

The young activist’s father expects the situation to become “less intense” for his family in the future, and thinks that Greta “really wants to go back to class.” He also explained that when he turns 17, he will no longer need to accompany her on her trips. “If you need me, I’ll try to do it,” he said. “But I think she will go, more and more, doing it alone, which is great.”