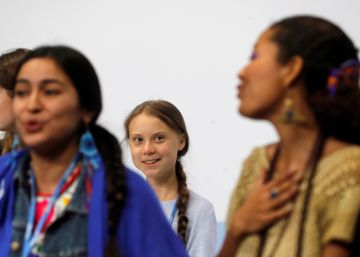 Greta Thunberg He appeared again on Monday at the Climate Summit to give prominence to six young people from developing countries who told their stories of activism at a press conference. The Swedish activist, worried because the spotlights on her dull others, sat in the center of a stage next to the well-known German activist Luisa Neubaer. On both sides of the podium were young people from Chile, Russia, the Marshall Islands, the Philippines, Uganda and an indigenous reserve in the United States. It was these who had the main interventions.

The 16-year-old Swedish activist made a brief intervention, highlighting the importance of listening to the indigenous people to face the climate crisis, because their knowledge of the Earth is useful. "They have been living in balance with nature for thousands of years," he said.

"It is important to hear the voices of the indigenous people because they are suffering, their rights are being violated, they are the most hit by the emergence of the weather," he added.

On a holiday in the middle of Spain, media interest in the Climate Summit has once again pivoted on Thunberg, which has once again gathered hundreds of journalists. It is the eighth day of the UN Climate Summit, which will last until Friday. Activists hope to pressure delegates from almost 200 countries to include more ambitious goals.

"We have noticed some media attention. And we believe it is our moral responsibility to use this attention to give voice to those who need to tell their stories," Thunberg said in his act at 10.30 a.m.

Angela Valenzuela, a 25-year-old Chilean, has told her stories at the event. Known as Loica, she is a singer and artist who lives in Santiago, Chile. He said that Chileans will continue to mobilize until the government hears their demands: "It is not for 30 pesos, it is for 30 years of democratic governments that have failed to protect us."

Arshak Makichyan, a 25-year-old Russian violinist, said that we cannot change the planet as we are. Kisha Erah Muaña, a 23-year-old Filipino, highlighted the importance of taking care of the oceans. Nakabuye Hilda Flavia, a 22-year-old student from Uganda, talked about how her family had to sell their land and livestock because of the drought. Rose Whippie, an 18-year-old American Indian, is known for her activism against a pipeline in Minnesota. He said that to solve the climate crisis, other measures are needed: "We must destroy white supremacy."

The Summit will dedicate this Monday a thematic day to "sustainable finance", on the eve of the start of the high-level segment of the summit. As the negotiations progress, which have one of their focuses and main obstacle in Article 6 of the Paris Agreement on carbon markets, the parallel conference focuses on the economy and sustainable finance.

Climate-related investments, the role of multilateral and national banks to finance projects and investments to mitigate climate change or the experience of the private sector and insurance against extreme events will be other topics of this eighth day of the summit .

Coronavirus: what happens if you arrive in Spain?