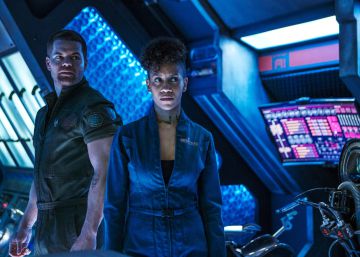 I know, as everyone knows - even those who make fun, even those who show their misery by insulting her - that the apocalypse against which Greta Thunberg cries out is not to frivolize, and she would not want to be taken as a nihilist. But I have the serious flaw of being a fan of the space travel genre, and when I saw Greta taking the colors out of the UN Assembly (which is a very science fiction site), a lot of dystopia in which humanity seeks in other planets the paradise that destroyed on Earth. It is a recurring nightmare, prior to panels on climate change. Since we began to dirty everything, many realized that the planet will be invivible.

The penultimate fantasy is titled The expanse (third season just released on Amazon, rescued by the whim of Jeff Bezos after Netflix canceled it): Earth (ruled by the United Nations, this is the most unlikely ingredient in the series) is disgusting, with the contaminated water and half of the extinct species, so a part of humans has begun to colonize the Solar System. They settled first on Mars, where they created a colony of slightly crude and messianic pioneers who, fed up with the earthlings, became independent and became a warmongering power, a kind of galactic Sparta. Earth and Mars live in a cold war that threatens to take all the planets ahead.

The conclusion, as always, is tremendous: there is nothing to do. Humans are voracious predators that destroy everything they touch and tend to destroy each other, no matter how much Greta Thunberg shouts at the rostrum. But you don't have to worry so much, because this is just a silly series of space travel. Or not?