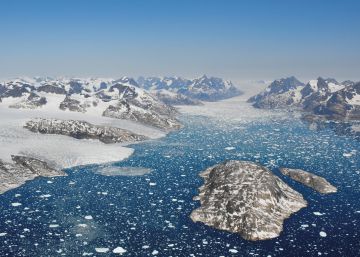 Greenland loses ice seven times faster than in the 1990s, according to a study published by the magazine Nature in which about a hundred scientists from fifty international organizations have participated and that shows its effect on sea level rise.

It is, according to the University of Leeds (United Kingdom), the most complete picture of Greenland's ice loss to date; To do this, the scientists combined 26 studies to calculate the changes in the ice mass between 1992 and 2018. In addition, they used data from eleven satellite missions, including figures for the volume, flow and gravity of the ice sheet.

This assessment has been conducted by Andrew Shepherd, of the University of Leeds, and Erik Ivins, of the NASA Jet Propulsion Laboratory in California. In addition to NASA, the work has had the participation of the European Space Agency (ESA).

In 2013, the Intergovernmental Panel on Climate Change (IPCC) predicted that the global sea level would increase by 60 centimeters by the year 2100, which would put 360 million people at risk due to annual coastal flooding.

However, this new study shows that Greenland's ice losses increase faster than expected, in line with the more adverse global warming scenario of the IPCC, which predicts seven more centimeters at sea level (67 in total) .

"As a general rule, for every inch of sea level rise, another six million people are exposed to coastal flooding across the globe," shepherd said in the statement.

So according to current trends, the melting of Greenland's ice will cause some 400 million people to suffer floods due to sea level rise: "These are not unlikely or small-impact events, but they are happening and will be devastating for the coastal communities. "

"It is not so much that the sea level rises a few centimeters as the consequences for the global climate of this increase," says Gorka Moyano, from isardSAT, a company dedicated to Earth observation technologies and has participated in the study. In Greenland, a series of factors coincide that make the thaw here greater and faster. "To global factors, such as the increase in COtwo in the atmosphere or deforestation are joined by regional, such as its location the northern hemisphere, too close to the main emitters, such as the US or China, "Moyano recalls. That explains that, while the thaw in Antarctica It is constant but smooth, in Greenland it has ripped.

In the footsteps of “Dino”