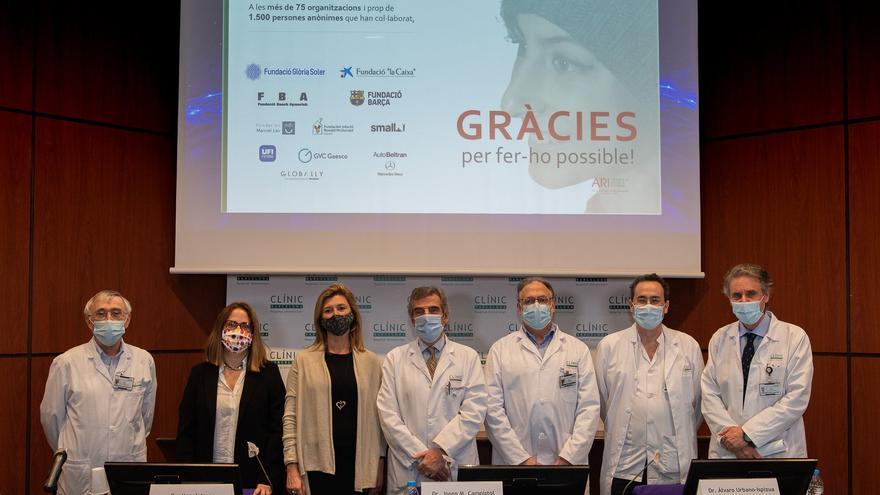 The CAR-T gene therapy against acute lymphoblastic leukemia (ALL) developed by the Hospital Clínic de Barcelona has obtained the approval of the Spanish Medicines Agency, becoming the first immunological treatment of this type developed entirely in Europe authorized by a regulatory agency . The treatment has been developed by a team of more than 175 professionals.

This advanced therapy, which consists of genetically modifying the patient’s T lymphocytes – a cell of the immune system – so that they are capable of destroying cancer cells, has achieved that 69% of the participants in the clinical trial, who had a hope of life of weeks, they are still alive a year later and that 47% are free of the disease.

“It is a relevant moment for our country, for research and public health. It is a moment of tremendous significance,” emphasized this Wednesday at a press conference the general director of the Clinic, Josep M. Campistol, who celebrated that the authorization of therapy will allow its clinical use for patients over the age of 25, beyond trials.

Campistol has announced this “important milestone” together with the director of the Clinical Institute of Hemato-Oncological Diseases, Álvaro Urbano-Ispizua; the head of the Immunology Service at the Center for Biomedical Diagnosis (CDB), Manel Juan; the head of the Department of medicines for human use of the Spanish Agency for Medicines and Health Products (AEMPS), César Hernández; and the director of the Healthcare Department of the Catalan Health Service (CatSalut), Xènia Acebes.

The approved Clinic therapy, called CAR-T ARI-0001, is part of the ARI Project, an initiative promoted by Ari Benedé, a girl diagnosed with acute lymphoblastic leukemia who died in 2016 at the age of 18, and her mother, Àngela Jover , to promote research of this type of treatment and that raised about 1.8 million euros to carry out the studies.

“Everything started with the ARI Project. Not only the necessary financial resources, but also the motivation, the enthusiasm, the teamwork. We will always be in debt to Ari,” Urbano-Ispizua highlighted.

“Today is a tribute to Àngela, but above all to Ariana, who really deserves it and deserved it: today would be a really very special day for her,” added Campistol, who has emphasized that therapy will make it possible to achieve a cure and recovery of many ALL patients.

In addition to being the first CAR-T therapy fully developed in Europe, the general director of the Clinic has also highlighted its academic and non-commercial nature, that is, it has been developed by research centers and not by private companies, which assumes that the treatment will be much more affordable for the National Health System.

Along the same lines, Urbano-Ispizua has highlighted, in a video released by the Clinic, that “the benefit” that the ARI-0001 provides in the first place “is that it covers a gap for patients with this type of leukemia. In addition, has stressed that the fact of producing it in the same hospital is also positive, “which means that the treatment can be administered to the patient in a much faster and easier way.” In fact, it has highlighted, another important aspect is that it can “adapt” to the characteristics of the person who is going to receive it Finally, it has listed the cost, “much lower” than that of a commercial CAR-T.

Acute lymphoblastic leukemia is one of the four main types of leukemia and is characterized by an overproduction of lymphocytes, or immature white blood cells, that multiply rapidly and crowd out normal cells in the bone marrow.

Although in most cases a complete remission is achieved with chemotherapy or bone marrow transplantation, between 10% and 15% of patients die from resistance to treatment, from toxicity or from relapse.

Now, with the approval of this therapy, which has been shown to be safe and effective, the Clinic expects to be able to see 25 patients a year.

Likewise, it has already launched another clinical trial with ARI-0001 together with nine Spanish centers to extend the use of this therapy and help to authorize its use in other hospitals.

“It is clear that the Catalan Health System is at the forefront of advanced therapies”, Acebes stressed, reiterating that CatSalut “is strongly committed to developing innovative treatments”, and has ensured that this “is a starting point for the growth of advanced therapies in Catalonia and also for other CARs that can be produced in our house “.

In this regard, Urbano-Ispizua has advanced that a clinical trial of a CAR-T ARI-0002 directed at patients with multiple myeloma is already being carried out, with initial results “very encouraging”.