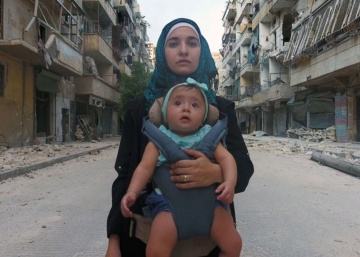 Some of the 2019 highlights They have explained to us our past, our present and, therefore, our future. Issues such as war, the charm of the rural world, corruption and family resonate with them. In addition, they can already be seen (or are about to do so) on the many platforms of streaming. Here are some recommendations to catch up throughout 2020 of what is happening in the genre.

This Swiss director (Lugano, 1982) formed in the field of animation combines with great skill the objective and the subjective, personal memory and historical memory in this award-winning film of the critics of the Atlàntida Film Festival. In it, he investigates in the first person the death of his cousin Chris Wütenberg, a war reporter who died in strange circumstances during the Balkan conflict. The real action scenes are shocking; the animation, hypnotic.

The journalist Waad Al Kateab (Syria, 1991) delves into a story perhaps too personal: the chronicle of the siege of Aleppo in the form of a visual letter dedicated to his daughter Sama. Without disguising reality or sweetening the horror of war, it has left a large part of the spectators who have seen the film there where it has been screened so far (South By Southwest and Cannes, among other festivals). Winner of the European Film Awards for best documentary, it is one of the favorite titles in the next Oscars. It will arrive in Movistar + in February 2020.

The imaginative and vivid photograph of this documentary seduces in such a way that, at the end, one feels that an entire summer has passed in Sweden. A combination of mundane stories with other more relevant ones in Kvidinge, the town of the director, serves as an excuse to create 70 minutes of magical realism amidst Scandinavian nature. March 2019 Ridge He won the main prize (and was one of the critics’ favorites) in one of the most important documentary film festivals in the world, the CPH: Copenhagen DOX. May see yourself in MUBI.

Director Nanfu Wang (China, 1985), who lives in the United States, returned to her hometown to shoot this documentary. There compiled hard testimonies recorded behind the back of the Chinese Government about the brutal birth control measures of the country in the recent past. The result of his research with Lynn Zhang has become another favorite title to win the Oscar for best documentary in 2020. “In China, our generation is the result of censorship and propaganda, so it was important for us to explain what had happened and give a context and nuances that this story has not had before. It was a way of unlearning what I learned ”, Zhang explained to THE COUNTRY.

“My name is Violeta,” were the first words Ignacio said to his parents, Franceska Jaimes and Nacho Vidal, to explain to them, with 6 years, that she was a trans girl. That revealing expression is what gives name to this documentary, which shows the challenges he will face from his adolescence. “It’s a bright and colorful story that helps us marvel at the difference,” he told EL PAÍS in his day one of its directors, David Fernández de Castro (London, 1969).

The American, winner of an Oscar in 2015 for her work in the documentary genre, personalizes in this medium length the story of the almost 3,000 segregated families in the United States. It is the consequence of the controversial immigration policy of Donald Trump. Maria and her son Alex, from Honduras, and Vilma and her daughter Yeisvi, from Guatemala, put a face, name and surname on this humanitarian crisis in the richest country in the world. “It is a matter that must be counted on more than figures”, the filmmaker explained in his day.

“Then I decided to spend a short season in Mexico City. One night, I found an ambulance in the corner of my street. I realized that the men who left her were more than co-workers, that they were really family and asked them to spend a night with them. I kept my mouth open with what I saw. Without looking for it, I found a movie ”, in October he remembered THE COUNTRY Luke Lorentzen (United States, 1993) about his new documentary. In this film, he follows in the footsteps of the Ochoa clan, which compensates with his private vehicle the medical deficiencies of Mexico City. Only a few dozen public ambulances are operational in a place of almost nine million inhabitants. It can be seen in Movistar + from January 5.

8. The prosecutor, the president and the spyby Justin Webster (Movistar +)

Director of Death in Leon premieres new six chapter series. In it he remembers the prosecutor Alberto Nisman. Four days after accusing Argentine President Cristina Fernández de Kirchner of conspiring with Iran, he appeared dead in his bathroom with a shot in the head. His mysterious death in 2015 became a global issue. Arrives at Movistar + on January 12.

In 2016, the Movistar + documentary series Death in Leon (2016), about the murder of the president of the Delegation of León Isabel Carrasco, was a success. HBO joined him premiering in early 2019 a movie, as a sequel and conclusion, titled Death in Leon Case closed. To continue betting on gender, he launched shortly after The pioneer. Throughout four chapters that have been the most commented of the year, Enric Bach makes a profile of another of the most controversial political figures in recent Spain, that of Jesús Gil. Justin Webster appears again in the credits, this time as a screenwriter.

And don’t lose track of …

Although they still do not have a release date, it is convenient to be aware of these other titles that are among the highlights of the 2019 documentary production.

North Macedonia released its name in 2019 and did so by placing one of his films in the screening rooms around the planet. This documentary by Tamara Kotevska (North Macedonia, 1993) on the parallel lives of a bee colony affected by the chaos of the modern world and her caretaker Hatidze, who also sees her peaceful rural life interrupted, has fallen in love with critics.