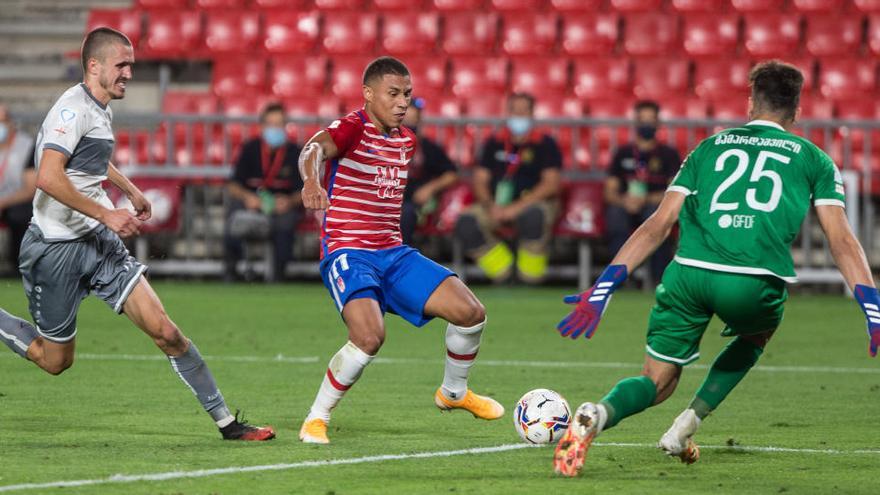 He Pomegranate CF fulfilled the predictions and reached the last qualifying tie for the Europa League group stage on Thursday by winning by 2-0 at Lokomotiv Tbilisi Georgian in the first match in European competition played by the rojiblancos in their entire history at their stadium.

The team led by Diego Martínez was much superior throughout the game and created many chances to score but only the Venezuelan Darwin Machís, at the beginning of the second half, and Jorge Molina, in the added, were able to overcome Giorgi Mamardashvili, promising 19-year-old meta from a visiting team that played the last half hour outnumbered by the expulsion of Giorgi Gabadze.

He Pomegranate their pass to the group stage of the Europa League will be played next Thursday as a visitor against Swedish Malmoe, who beat Croatian Lokomotiv Zagreb 5-0, in a tie that like all those played so far will be a single match

Granada dominated from the beginning against a brave opponent, since he neither locked himself in his area to defend nor gave up touching the ball in attack whenever he could despite his clear technical inferiority.

The first occasions of the Andalusians, not very fluid and too slow in the circulation of the ball in the first half hour, they arrived in strategic actions from the corner kick.

Granada improved in the final stretch of the first halfor from finding the depth per band and the arrivals from behind of their midfielders for the shot, touching the goal on good occasions from Ángel Montoro, Luis Milla and Gonalons.

Mamardashvili, the best by far of the Georgians, showed that he is a goalkeeper with a future with good stops against Machís and Jesús Vallejo in the final stretch of a first half which ended with another misdirected local header, in this case by Víctor Díaz.

Granada started the second half with the aim that it lacked in the first and Machís only took three minutes to score 1-0 with a sensational right hand from outside the area.

The brazilian Robert Kenedy was about to extend the advantage shortly after but again ran into the good stop Mamardashvili.

The game became even more expensive for the Spanish team with the expulsion of Giorgi Gabadze, who left his team with ten players shortly before game time after seeing two yellow cards in just three minutes when making fouls.

The last third of the clash was also completely dominated by Granada, with good opportunities to widen the difference of Alberto Soro, very active in his debut as a roiblanco, and Montoro, who narrowly missed a goal.

With Lokomotiv Tiflis unable to star in any hint of reaction to equalize the contest, Luis Milla was also denied 2-0, as his tremendous kick crashed into the stick.

Granada searched until the end a goal of tranquility that Mamardashvili avoided twice against Antonio Puertas and that Jorge Molina achieved already in added time by taking advantage of a goal rejection.

Referee: Serdar Gozubuyuk (Dutch). He expelled the visitor Gabadze (m.54 and m.57) for a double yellow card. He also admonished the local Soldado (m.55) with yellow, and the visitors Dartmeslia (m.9) and Oulad (m.22).

Incidents: Match corresponding to the third qualifying round for the Europa League group stage played at the Nuevo Los Cármenes Stadium behind closed doors.

Sam Bennett wins the sprint on a transition day

Competition gives the three points to Arucas against San Mateo