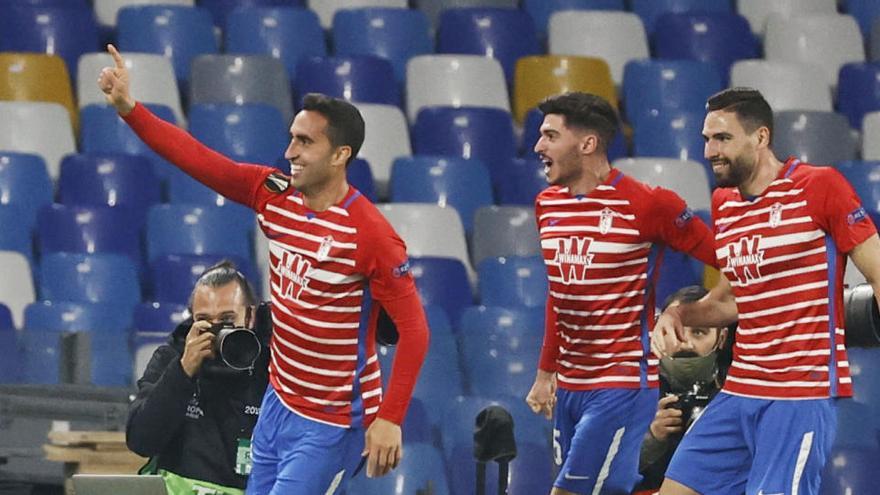 The grenade suffered against him Naples at the Diego Maradona stadium the sweetest defeat in its history, since the 1-2 this Thursday, together with the 2-0 victory he achieved in the first leg, allowed him prolong your European dream and reach the knockout stages of the Europa League.

In the first season of his sporting life in a continental tournament, Diego Martínez's Granada survived the push from Naples and despite receiving two goals, from the Polish Piotr Zielinski and the Spanish Fabián Ruiz, he sealed the round pass thanks to an authoritative header. by Ángel Montoro.

Montoro, who was booked and will miss the first leg of the round of 16 with Germán, scored the momentary 1-1 in the 25th minute and from there Granada knew how to withstand the Neapolitan assault, also thanks to a monumental performance by the Portuguese goalkeeper Rui Silva, the protagonist with three decisive saves.

A sporting feat achieved despite the worst possible start, as Napoli, who started 3-4-1-2 against a long series of illustrious casualties, took the lead after just three minutes thanks to Piotr Zielinski and took great confidence in their options to achieve the comeback.

Martínez's team took a few minutes to recover, but finally he took character and, after a goal disallowed by Puertas for offside, he achieved the longed for so much away from home through Montoro, with a powerful header to center from French Dimitri Foulquier.

Montoro's target, the second he has achieved this season, increased the nervousness of Naples and the intensity of the game. A long series of clashes began, which resulted in up to eleven yellow cards and with Montoro and Germán who will miss the first leg of the round of 16 due to suspension.

Granada's problems were increasing, because after the injury of the Venezuelan Darwin Machís in the warm-up, the French Maxime Gonalons and the Spanish Carlos Neva also had to withdraw due to physical problems, who left in tears due to severe muscle pain.

But Martínez's team knew how to suffer, lock himself in his half of the field and contain the momentum of Naples, driven more by desperation than tactical ideas.

The Neapolitan pressure had a prize at the time of the game thanks to the 2-1 of the Spanish Fabián Ruiz, who opened a final half hour of tremendous demand for Granada, with Naples that strengthened its forward with its historical top scorer, the Belgian Dries Mertens.

The Andalusian painting was saved by a Mertens Vaseline As soon as he jumped onto the field that went high and a goal from the Frenchman Tiemoue Bakayoko annulled by a clear offensive foul, and could count on a decisive Rui Silva.

The goalkeeper denied the goal to Macedonian Eljf Elmas with an excellent intervention and repeated it in the 91st minute after a header from Algerian Faouzi Ghoulam, which definitively thwarted the Neapolitan push and gave Granada a historic night.

Incidents: Second leg of the Europa League round of 32 played behind closed doors at the Diego Armando Maradona stadium in Naples.