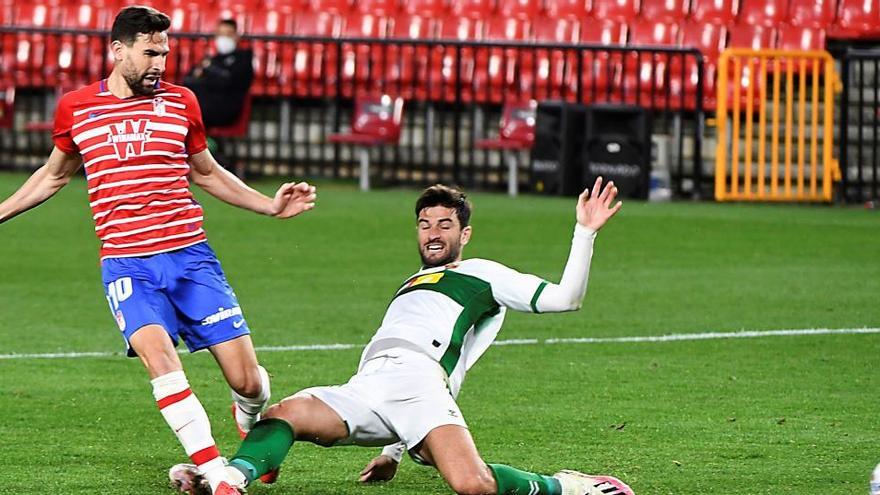 The grenade ended a six-game winless streak with a 2-1 win on Sunday at the Nuevo Los Cármenes Stadium at Elche, which chains its second defeat and will continue in relegation positions.

In a boring and slow paced first beat, a goal from the Portuguese Domingos Quina put the locals ahead, although the Argentine Lucas Boyé equalized for the people of Elche five minutes before the break, although in the final stretch of an even second act Antonio Puertas scored to leave the three points in the Nuevo Los Carmen is.

The Granada, which faced the shock with nine casualties and ended it outnumbered When the Venezuelan Yangel Herrera had to leave the field due to physical problems, he pulled his heart and breed to overcome the fatigue accumulated after the Europa League tie against Naples to achieve a victory that brings him very close to permanence.

The Andalusian team started the game better and Yangel Herrera had a clear chance to score in the first local approach, but his header, when he was free of mark, narrowly missed the goal.

The visitors did not feel uncomfortable with the territorial dominance and the greater possession of the rojiblancos, and they stepped on the rival area, although with little danger, with two deflected shots from Gonzalo Verdú and Tete Morente.

After half an hour of play, it was 1-0 in a great individual action by Domingos Quina, which he moved well in the front of the area and an unstoppable left-foot was taken out of the hat for Edgar Badía.

Granada lived calmly with the score in favor against an Elche who regularly resorted to direct play towards their two forwards, the Argentines Lucas Boyé and Guido Carrillo.

In one of those long shipments, the Argentine Nehuén Pérez also hesitated to clear, Lucas Boye caught the ball and scrambled to perfection to cross the ball out of reach of the Portuguese Rui Silva.

Elche finished the first half better, with a forced header from Guido Carrillo and a shot outside by Dani Calvo.

Equality presided over the second half from the start, with an increasingly better Elche that scared the locals with a shot from a very active Lucas Boyé to make Rui Silva work.

Granada responded with a shot from outside the area by Cameroonian Yan Eteki that forced Édgar Badía to make a good intervention.

The goal from Elche saved his team with a save against Fede Vico, whose entry to the field improved the rojiblancos, on the clearest occasion of the second half.

The two teams tried to make little mistakes in the final stretch of the duel so as not to lose the point they had in the locker, although Granada scored again in a sensational collective in the 79th minute.

Jorge Molina made an outstanding move to get the visiting defense out of its place, filtered a pass into space for Frenchman Dimitri Foulquier and his center completed it with a shot on goal by Antonio Puertas.

Elche was very close to drawing again, but Rui Silva saved with a save the equalizer in the last play of the clash when he took a shot from point-blank range by Dani Calvo.

All the goals of matchday 36 of Second

All the goals of LaLiga matchday 32