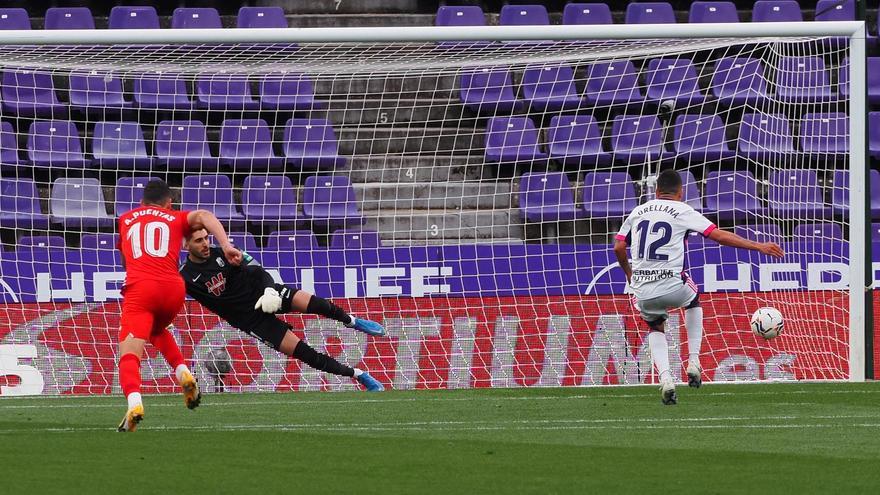 The grenade He appealed to the fighting spirit and his perseverance to flip the marker and get over 1-0 with which the break was reached, thanks to the penalty scored by Orellana, before a Real Valladolid to whom the same ghost of fear reappeared and pressure.

The Andalusian team, despite reaching José Zorrilla being the Spanish team that has played the most games this season -50- and their participation in Europe on Thursday, did not show any fatigue and took the initiative of the game. In fact, in nine minutes, he had already fired three shots at the goal defended by Masip.

Eteki, Machís and Quini put the Blanquivioleta goal to the test. Granada made clear their intention to continue progressing in the league, with a pressing game, to take advantage of their speed after theft. Meanwhile, Real Valladolid managed to reach the rival area with a certain danger with a header from Kodro that went wide.

The game was balanced, since possession of the ball was distributed in a similar percentage, but the truth is that the locals found it difficult to spin plays against the serious defense of the Granadans, and these, on the other hand, were more comfortable and organized on the offensive plane, against a more hesitant Valladolid in his area.

But that equality was broken by a Vallejo penalty on Kodro that the referee did not hesitate to point out, since there was contact within the area on the Blanquivioleta striker. Orellana, as he did against Sevilla, was in charge of transforming the penalty to give his team an advantage before the break.

The second half began with the forced change, in the local team, of Miguel Rubio for the injured Javi Sánchez, while Herrera entered the Nasrid team to replace Yan Eteki. Diego Martínez added a new variation with Montoro, which was entered by Vico, thus advancing his lines.

Real Valladolid was more intense and kept great pressure on the opposing players. I wanted more goals. He wanted to ensure victory, to avoid a repeat of what happened in the previous match in the Blanquivioleta fiefdom against Sevilla. But the nerves surfaced, resulting in several yellow cards.

Sergio González sought to alleviate them by adding Marcos André to the field of play, but in this case it was his attacking teammate, Kodro, who had the opportunity to score a new goal, although his shot was repelled by the crossbar. This, however, spurred Granada, which showed its nails on each arrival in the local area.

And that fight led to the Andalusian draw, thanks to a great definition from Jorge Molina, who finished at pleasure after the center of Foulquier. The goal knocked out Real Valladolid and gave wings to a Granada that managed to turn the scoreboard with a whip from Quini, which Masip could not reach. 1-2 and the blanquivioleta team, sunk, and without room to react.

Incidents: Match corresponding to the thirtieth day of LaLiga Santander, played at the José Zorrilla stadium.

Hazard despairs of madridismo for his image after the match