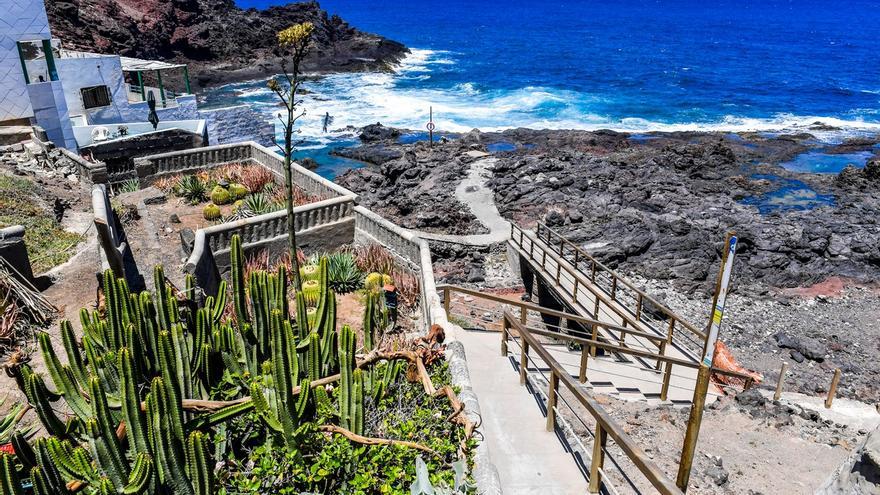 “Tidal pools are not a subject given in the university because, traditionally, in the Canary Islands they have been built by local ingenuity, the empirical wisdom of the residents of each coastal area, with very limited resources and with surprising results. At the level of hydraulic operation, they are wonderful.

Luengo cites as the most unique example of puddles built in the Canary Islands, the north coast of Gran Canaria, mainly Gáldar, which has more than 20 puddles, mostly built, “with a little work and super well adapted to the place,” he points out. The architect. «The last one built in Gran Canaria is that of Las Salinas in Agaete, where there are professionals involved, but the local pools do not have to envy the professionals, they are perfectly adapted to the landscape. For me they are an island within another island, totally unknown, maybe there is a certain chaos and urban disorder, but in the case of the puddles they are super well executed ».

The master plan for tidal pools in the Canary Islands, developed by Tourism, contemplates the intervention of 117 tidal pools spread throughout the Canary Islands, of which 10 are in Gran Canaria. In this sense, Alberto Luengo, who thanks the General Directorate of Tourism Planning of the Canary Islands Government for the interest given to the tidal pools, points out the need to be “very cautious” with the level of intervention in these coastal areas. “You have to be very careful because we run the risk of dying of success. The key is not to introduce an excess of work, to be as humble as the locals who made the puddles.

The measure that, in his opinion, should be implemented is to control the capacity of the puddles. «For example, in the Charcones de Bañaderos in summer two and three thousand people can pass a day; and in San Cristóbal hundreds of people ». For the rest, “except to solve some access problem, you should not intervene”. He commented on the unique case of Los Charcones in Lanzarote, “a landscape of world interest, with 150 puddles with all kinds of shapes, colors and sizes, where there is no need to intervene in any way.”

Luengo, on the other hand, is in favor of offering alternatives to new puddles. “Apart from those that exist, there are situations on the Canarian coast that allow new pools to be consolidated without the need for large investments.” He gave as an example the most recent case, which are the three pools of the puddles on La Laja beach, built on the fossil beach. «At the beginning the surfers were against it, but nothing happens there, because what was done was digging, no work was put in that would alter the layout of the wave. So much so that a day there are hundreds of people who enjoy this pool, built about six years ago, “says the expert, who has proposed the construction of the Las Américas pool for Tenerife,” a case identical to that of La Playa. Laja, which is simply to excavate the fossil beach ».

In Gran Canaria, there are 42 tidal pools, with 60 glasses, which are divided among the natural ones (19), which do not have any type of intervention – “I understand that they must be kept in their original state” -; the mixed ones (17), which maintain their original funds but have been closed with a wall, – “they maintain the biology of the original pool” -; and, finally, the artificial puddle (6), “in which the bottom is concreted, with which the biology inside the puddle disappears.”

The area with the most pools of volcanic origin is the Northwest of the Island, with 24 pools and 38 pools. They stand out from the Charco de La Aldea (natural), which has a massive influx of visitors on September 11, the day on which the famous Fiesta del Charco is celebrated.

The Charco de las Salinas in the Puerto de Las Nieves in Agaete (artificial overflow and pond with 3 glasses), is the most recently created, with a high intensity of use.

In Santa María de Guía, the Charco Roque Prieto stands out, mixed with an overflow with two glasses, located east of Punta de Guanarteme and sandwiched between a cliff and the Risco de Roque Prieto. It is one of the most important on the north coast.

In the northeast area, there are seven puddles and nine glasses. Of these stand out, among others, that of Altillo, in the municipality of Moya, a mixed overflow, with a medium intensity of use, located in front of the coastal settlement of Altillo. It is accessed through an alley between buildings having a solarium on the floor at the back of the pool. Although in this area it is the best known and busiest in summer – it can concentrate thousands of users a day. It is about the Charcones del Puertillo, in Bañaderos (Arucas), mixed with two glasses.

From the East and South areas, it is worth highlighting the youngest of all, the Charcos de La Laja in the capital of Gran Canaria. Artificial, it has three glasses, two of them rectangular in shape are fitted inside with mass concrete work, and the upper puddle with a lower depth is used for children, having a concrete solarium and a large green area, being without restore the upper slope.

Among the natural pools is La Restinga, in Jinámar (Telde), located below Bocabarranco beach. It is a circular space in longitudinal roads, with low intensity of use, which is accessed by the road from the shopping center from the link to the GC-1 in Jinámar. When the sea is rough it is dangerous.

In the municipality of Agüimes, in Arinaga, there is the Charcón de Arinaga or Soco del Negro, a mixed space, which preserves the natural bottom of the rasa in its interior and at its tail there is a small beach of black sand that fills at the high tide.

In the South, the best known are the Charca de Maspalomas (natural); or the Charco de Arguineguín, artificial with a sandy beach.