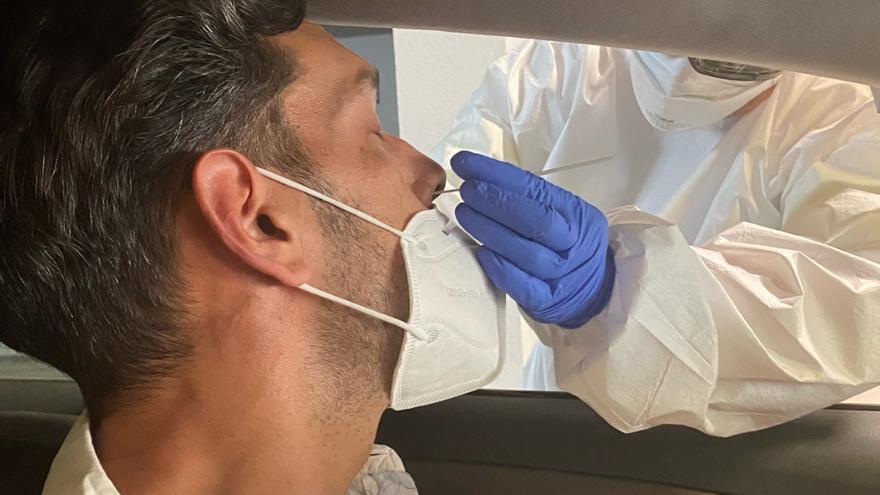 This week, the Canary Islands registered 72 new outbreaks with 455 cases, of which 41 have occurred in Tenerife, 19 in Gran canaria, eight in Lanzarote and four in Fuerteventura. These data represent an increase of 12 new shoots more than the previous week, as notified by the Ministry of Health of the Government of the Canary Islands.

By area in which they have occurred, it should be noted that 29 are social outbreaks, 21 family, 13 work, six educational and three in socially vulnerable groups.

In general, all the outbreaks have less than 10 associated cases, except for 10 outbreaks that exceed that number, among which one reported at work in a company dedicated to the food industry in Tenerife stands out. with 23 cases, one from a social gathering in Gran Canaria with 21 affected people and three family outbreaks in Tenerife with 19, 12 and 12 cases, respectively.

It should also be noted that most shoots this week are social, followed by relatives, the latter mainly produced among non-cohabitants with several addresses associated with each outbreak.

Regarding labor outbreaks, it is worth highlighting the aforementioned detected in a company in the food industry with 23 cases in Tenerife, one with 10 people involved in a restaurant establishment in Gran Canaria, one with seven cases in an establishment in Tenerife dedicated to food delivery, one with six cases reported in an office in Gran Canaria and one with six people involved linked to a company in the agricultural sector of Tenerife.

Of the six educational shoots, all with family branches and reported in Tenerife, one has 14 cases and also has a work branch, another has 11 affected people and has sports and work branches, and the other four outbreaks affect seven, five, three and three people.

17 old outbreaks are also being followed, some of which have grown in number of cases. A) Yes, a sports outbreak reported in Lanzarote already affects 179 people, two schools with family branches in Tenerife who already have 46 Y 25 associated cases, one social in Fuerteventura with 34 affected people Y one work with 22 cases in Tenerife, among others.

This week, the Canary Islands registered 72 new outbreaks with 455 cases, of which 41 have occurred in Tenerife, 19 in Gran canaria, eight in Lanzarote and four in Fuerteventura. These data represent an increase of 12 new shoots more than the previous week, as notified by the Ministry of Health of the Government of the Canary Islands.

By area in which they have occurred, it should be noted that 29 are social outbreaks, 21 family, 13 work, six educational and three in socially vulnerable groups. Read more

Gran Canaria registers 19 outbreaks of coronavirus in the last week

Fighting Covid-19 continues without rest in the Canary Islands. The Islands have registered this Wednesday, June 9, about 141 positives and have had to regret two deaths, as confirmed by the Ministry of Health of the Government of the Canary Islands. This supposes an increase in the epidemiological curve of the archipelago with respect to the previous day, when about 119 new infections and one death were registered.

Residents in Gran Canaria and Tenerife over 45 who have not been vaccinated can make an appointment at 012. Read more

Seven out of ten residents of the Canary Islands between 50 and 59 years old have already received at least one dose of the vaccine. Read more

How to obtain the EU-COVID Digital Certificate in the Canary Islands. It can be obtained through the website of the Ministry of Health on the internet and in the application for prior appointment. Read more

Infecar doubles its capacity and the SCS prepares another two massive points. The Fair site registers queues on time and administers an average of 1,600 daily vaccinations | The region has already inoculated 1,238,654 doses of the sera. Read more

The teachers hired by the pandemic end their contract in June. Read more

The vaccination campaign against Covid-19 is noticeable. Canarias has registered this Tuesday, June 8, 119 coronavirus positives and has had to mourn a death -a 54-year-old woman in Gran Canaria, who had previous pathologies-, as reported by Ministry of Health of the Government of the Canary Islands. These data represent a slight increase compared to the previous day, when the Islands added 104 infections and one death from the virus.

Some 423,721 people, immunized against Covid-19 in the Canary Islands. Read more

The Canary Islands start the week with a deceased and more than a hundred infections of Covid-19. Read more

New shipments of vaccines against the coronavirus from Pfizer and AstraZeneca arrive in the Canary Islands. Read more

Lorenzo Armenteros, spokesman for the Spanish Society of General Practitioners on Covid Issues: "It is paradoxical to adopt such extreme measures with AstraZeneca and not with Janssen." Read more

Four admissions and two months sick leave after being vaccinated with AstraZeneca. A teacher recounts the adverse reactions she suffered with the first dose of the covid drug: "No one can tell me what happened to me." Read more

The Canary Islands almost tripled the number of deaths linked to the coronavirus in the last week. In the first days of June, five people died from causes related to the virus in the Islands | The Ministry of Health notifies 87 infections of Covid-19. Read more

One death and 84 coronavirus infections in the Canary Islands in the last 24 hours. 28 people are in ICUs and 189 in hospitalization floors in the Islands for covid-19. Read more