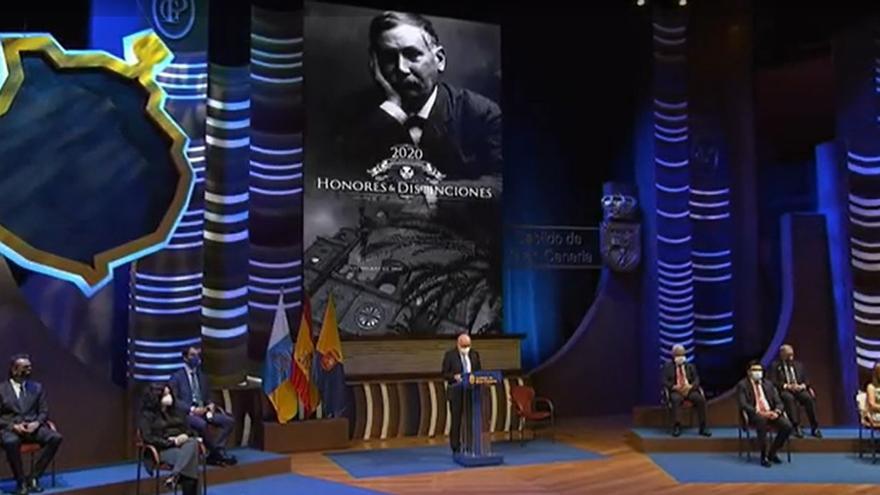 He Cabildo of Gran Canaria has recognized this Wednesday as favorite son of the island on the centenary of his death to writer Benito Pérez Galdós on the occasion of the delivery ceremony at the Alfredo Kraus Auditorium of its annual awards, a title that the actress now also wears Antonia San Juan.

“Excited and proud”, San Juan has served as spokesperson for all the honorees this year by the island corporation, to highlight the “happiness and responsibility” that comes with receiving the maximum recognition that the island grants to those who are born on it.

The honors and distinctions that the Cabildo de Gran Canaria awards each year coinciding with the anniversary of its constitution (107 years, in 2020) have been delivered this time late, since the gala had to be suspended in March due to the state of alarm.

In addition to Galdós and San Juan, Gran Canaria recognizes today as favorite son -also in his case posthumously- to the employer German Suarez and welcomes like adopted children from the island to the Cabildo Emergency Coordinator, Federico Grillo Delgado, and the specialist doctor in Geriatrics and Gerontology René de Lamar del Risco.

Among the winners have appeared as Dogs of Gran Canaria in the field of arts Josefa Aurora Rodríguez Silvera, Teresa Correa Suarez Y Cristina Ramos; while representing the sciences have been recognized the Institute of Oceanography and Global Change, Alonso Hernandez Guerra Y Carmen Paz Suarez.

Among the 22 winners, the folkloric Los Faycanes Folkloric Group, Pedro Jose Franco Lopez; and for its role in the tourism sector the airline Binter Y Angel Luis Aldai; while the prize in the field of international solidarity has gone to the Canary League of Education.

For her long career in the entertainment world, as recognized by the Cabildo, Antonia San Juan has spoken on behalf of the winners, stating that she feels “pride and luck” to have been born in “paradise”, by beaches and its good climate 365 days a year, but also “due to the plurality of ethnicities, cultures and identities … For its people”.

Antonia San Juan: “Galdós will never be dead as long as there is a voice that names him”

In addition, he highlighted the added honor for all the winners of having been awarded the same year as Benito Pérez Galdós, “who took literature to the top” and “will never be dead as long as there is a voice to name him.”

For his part, the president of the Cabildo de Gran Canaria, Antonio Morales, has valued that this gala “rewards and recognizes” the values ​​of 22 people and groups in the “renewal of the common commitment to win the social, environmental and economic challenges and cultural “.

“In you we discover the best of our way of being, of our values, of our tenacity, of the progress of this society that we feel with pride”, the president told the winners.

The winners, as Morales has pointed out, are an example of “courage, effort and an indisputable contribution to the development of Gran Canaria”.

By rewarding and recognizing “this representative group” of society, culture, economy, sports, education, health, research, emergencies, folklore, solidarity, associations, among other areas, the Cabildo is “extending this assessment to the population as a whole, which every day makes it possible for the island to progress and become coherent.”

This act of homage to 22 people and entities that “enrich in all dimensions of these awards”, is “the best opportunity to reaffirm confidence in the possibilities as a people” of Gran Canaria.

The president of Gran Canaria has reviewed in his speech a year of “celebrations and great sorrows”, such as the “enormous joy” of the declaration of Risco Caído and the Sacred Mountains of Gran Canaria as a World Heritage Site and the “atrocious fires” that devastated the peaks, as well as the pandemic that “could increase the levels of poverty and social exclusion and paralyzing the economy. ”

“The Cabildo will continue to work on the island to consolidate itself in the 21st century as a society affirmed in democratic values,” Morales said

He highlighted the commitment of the corporation to maintain “the energy of some and resistance to the others” in the face of these challenges and that the Cabildo will continue to work on the island “to consolidate itself in the 21st century” as a society affirmed in democratic values, of sustainability, economic diversification, energy and environmental transformation, socially cohesive and that is “guarantor of equality between women and men and identified with their culture and higher levels of education for all.”

The act has been followed by Youtube, where it can be seen again in delay: