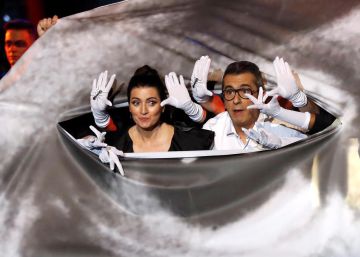 Pedro Almodovar I had just exhibited, Goya Award to the Best Original Screenplay in hand, the importance of the script in the cinema when Sílvia Abril appeared on stage, disguised as a superheroine called Super Sílvia, with some manual joke about being a woman ("I have the power of invisibility, I am an actress of plus 40 ") and an imitation of Beyoncé. Perhaps the invention was funny, but with such a curtain was impossible to determine: the clash of tones, from the slow solemnity of Almodóvar to the mood of all April audiences, fell like a whiplash.

No presenter controls neither the rhyme nor the tone of an awards gala. It appears among the speeches of the winners, who bring the true character to the night, and tries that the thing does not go of mother. If the speeches are numerous and long, one ends up doubting which side of the saying it is: if in the madman's, or in the crazy one that follows the crazy. Andreu Buenafuente, who is possibly the comedian who better know how to share the stage in Spain, had been the sane in that equation so far. It appeared between tears, political proclamations, memories to parents, long live the cinema, the "passion for telling stories", pain, glory, and, without imposing itself, cupped the atmosphere. It was a sensible formula that printed rhythm and that in these Goya has stopped working.

On that stage were Buenafuente, Abril, the hundreds of Spanish cinema, and in many cases, the mother. No one gave up a second. For what. The winners had no time limit in the speeches of this edition, so each one went into detail detailing the importance of the prize for him ("I want to tell you that I spent my childhood ...", "I have been ten years ago member of the Academa and ... "). Everyone, each of his father and his mother, cried, got excited, had their little piece of gala, and by the time Javier Ruibal broke up to sing in his speech for Best Original Song, enough show for three galas had already been served. This in the 38th minute of a longer ceremony than the Irish. In between Buenafuente and Abril appeared, he tried to do his thing, they disappeared so that someone like Pablo Alborán sang something, everything was interrupted again to present a film and maybe he passed the Ryanair offer cart, who knows.

There were high moments. The initial musical number, which reviewed the history of Spanish cinema, had the intelligence of stopping to parody the Madrid cinema of the nineties. There were memorable speeches (that of Benedicta Sánchez, and both of Almodóvar) and attempts to innovate (the prize given by Jorge Sanz behind the scenes, the spontaneous false that interrupted to the Javis). April and Buenafuente brought their trade and some joke: in a gala that had not had the weight of two, perhaps they would have been effective.

The Academy is honored not to leave anyone out of their big night. But they get very expensive.