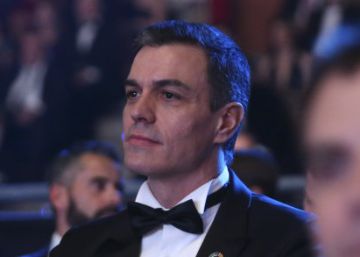 It almost looked like an intruder. Because he has been invited for a while, but he always had another plan. Every year, the Goya summon the biggest stars of Spanish cinema. Personalities of all kinds are added to the red carpet. There are the lights and there must be a famous celebrity who respects himself. However, there was a celebrity who was immune to the gala’s spell. And that was the most desired, which actors and directors would like to meet. Among other things because his future depends, in part, on his opinion. Perhaps the best summary was that of the co-presenter, Andreu Buenafuente: “We see his presence as something extraordinary, but it should be normal.” Of course, it is not usual for the President of the Government to go to the Goya. It had happened once, in 33 years, and since that visit of José Luis Rodríguez Zapatero three years have passed. Finally, Pedro Sánchez improved this Saturday the statistics in the 34th edition, held in Malaga. Hence the divos will not miss the opportunity to clarify to the chief executive the needs of the cinema. It won’t be that they won’t see him again in 15 years.

“I ask you to keep an eye on the culture. It would mean more money and it is necessary for decent films, ”defended Marta Nieto, nominated by Mother for best leading actress. Its category, and the others of interpretation, are divided by sexes. But, in the rest of the sections, there was one nominee for every four men. “There is a problem regarding how many director projects get funding. And there begins to plant a seed of what has happened, ”said Belén Funes, who opted for the award for best new director for The daughter of a thief.

The need to achieve equality thus led the list of pending issues. But there is more to do. “I plan to speak with Pedro’s president to Pedro, from you to you, and I have a lot to ask. In Spain, many governments have forgotten that cinema is the memory of a country, ”said Almodóvar, a favorite for Pain and glory. And Alejandro Amenábar, nomination leader with the 17 of his film While the war lasts, He also left his requests for a private talk: “I would comment rather on a meeting. In any case, with that rule, okay. ” While Antonio Banderas requested that a patronage law for cinema and theater be passed.

Actor Juan Diego Botto’s recipe was almost as simple: “Look at French cinema.” That is, more funds, protection and respect. Ángeles González-Sinde, former Minister of Culture, offered this suggestion: “Maybe new rules of the game may be needed.” Oliver Laxe, creator of What burns, one of the most applauded films of the year, was concrete: “That RTVE and ICAA [el Instituto de las Artes Cinematográficas] work more together. ”

Among many wishes, the actor Carlos Bardem broke a spear in favor of the president. On the one hand, he invited him to increase spending on Culture – he assumed 0.3% of GDP in the Socialist Budgets rejected in Congress in 2019 -, so that Spain ceases to be “at the tail of its surroundings”. At the same time, he recognized Sánchez that “at least he goes to the movies, not like other presidents who boasted of reading the Brand” He alluded to ex-president Mariano Rajoy, who confessed, before the 2017 gala, that he had not been able to see “any of the nominated films.”

It was not possible to know if Sánchez has more passion for Spanish cinema: neither he nor the newly appointed Minister of Culture and Sports, José Manuel Rodríguez UribesThey accepted questions. But Bob Pop, program contributor Leit Motiv, from Movistar, he gave a piece of advice: “Let him go to the movies more and check him out at the exit.” Maybe it helps the visibility of Spanish cinema. Because the television audience of the 2019 gala (3.9 million viewers) exceeded the tickets sold for the five films that qualify for the main prize this year (3.2 million). And while the rooms recorded the best influx data in years, with 105 million viewers, the share of national cinema dropped to 15%. It is understood, then, that the actor Luis Tosar will send the president a simple wish: “That it be fixed on us.”

Will Penelope Cruz be seen again screaming ¡Pedrooo !!!? Almodóvar has missed this Saturday the fact that the Spanish actress will be responsible for delivering at the next Oscar ceremony, on February 9, the award for best international film to which the Spanish director competes for Pain and glory.