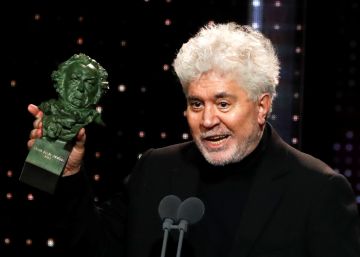 Pedro Almodóvar started writing Pain and glory influenced by his feelings of tranquility and calm in the pool where his back pain was treated a few summers ago. “The best moment of the day”. From that current he passed to a stream of his childhood, that of the river where his mother and the women of the town washed their clothes. “For me it was a party and I realized that I was writing about myself, of the passage of time,” he said on Saturday on stage. Finally, his immersion in a life that is his only in part, an autofiction game that reproduces his house on the screen that builds a childhood imagined for the script, has led him to win seven goyas. Her love song to the cinema (“I don’t conceive of life without continuing to shoot,” he confessed) was chosen the best film of the 34th Goya Awards gala.

Actually, the whole ceremony — long, eternal — was a tribute to Almodóvar. Penelope Cruz and Ángela Molina presented the award for best direction. “Pedro’s cinema has made me freer,” said composer Alberto Iglesias, with his award for best music, who has been with him 11: he is the person with the most statuettes. The award for best leading actor went to Antonio Banderas, El Salvador Mallo, Almodóvar transcript in his physique and in his illnesses, not in his experiences. For that they had mounted some Goya in Malaga: so that finally the actor achieved his first competitive prize – he received the Honor Award in 2015 – after five previous nominations. The more than 3,200 attendees, the largest capacity in the 34 editions of the awards, stood up to applaud him. Very excited, hitting the statuette, he gave up giving his prepared speech. “All this is Pedro. We have spent four decades and eight movies … I’ve never met someone with the loyalty you have for your cinema, ”he said. “And I had to get here with you.” To close his words, Banderas celebrated that three years after his heart attack. “Not only am I alive, but I feel alive.”

On the other hand, the magic of Malaga did not help Pepa Flores break her media silence and collect the Goya de Honor. Marisol remained consistent with her absence from today for 35 years and watched the gala from home. Better for her, because there were constant yawns that failed to overcome Andreu Buenafuente and Sílvia Abril, presenters on an immense stage, that of the José María Martín Carpena sports hall, which took advantage of the visual.

Another Almodovarian moment came with the recognition, at 87, of Julieta Serrano, the filmmaker’s mother on screen, as best supporting actress. Penelope Cruz did not receive it, the other Jacinta from Pain and glory, in the protagonist’s childhood footage. Instead, Goya won the best leading actress in another malagueña, Belén Cuesta, the bereaved woman and suffered wife of a mole of the Spanish civil war for 33 years in The infinite trench. Another glowing female presence came with Benedicta Sánchez, another mother suffered in What burns, and best revelation actress at 84 years old. Oliver Laxe’s drama also received the award for best photography direction, a work by Mauro Herce that gives magic to Laxe’s images. Belén Funes won the Goya for the best new director for The daughter of a thief.

If the gala was planned as a party, she left as a mother. If it was a three-way competition, it remained that way until the end of the delivery. But in that closing, the result was uneven in favor of Pain and glory. While the war lastsby Alejandro Amenábar, he took five statuettes, including the best supporting actor for Eduard Fernández; The infinite trench, two, for Cuesta and for its sound. Outdoor, by Benito Zambrano, he achieved two others, the best song, for Javier Ruibal, and the best adapted screenplay, since it is based on the homonymous novel by Jesús Carrasco.

There was time for claims by the filmmakers who went out to collect an award – for each woman nominated there were three names, and April underlined it with a “Goya to the best director … or director” – messages against racism, climate change and discrimination and even, without mentioning it, the parental veto. The cellist Ara Malikian, Lebanese fled the war, a child musician who crossed borders to finish in the Madrid neighborhood of Malasaña, is the protagonist of the documentary chosen as the best in its category. “I have been a refugee and now we want to make ourselves believe that we are to blame for the current misery, and we are the wealth of civilization.” Almodóvar used his prize for the best original script to remind him to the president of the Government, Pedro Sánchez, which “in the next four years will be the co-author of the script” of all Spaniards. “I hope he does well, because that will be good for others.” For 15 years, a president, since 2005 with José Luis Rodríguez Zapatero, did not attend the ceremony. Many of the attendees took advantage of the red carpet to show their happiness for it. The gala also served for the Academy to announce, in the speech of its president, Mariano Barroso, who declared 2021 the year Berlanga, “to celebrate the centenary of his birth”, which will be celebrated on June 12.

In a moment of dismissal, Almodóvar told on the red carpet that Penelope Cruz will be co-host of the Oscar for best international film, which the Madrid actress took with humor: “The other time, 20 years ago, Antonio and I could give him the statuette to Pedro with Everything about my mother. I don’t know who will accompany me in this edition … although the announcement was going to be made next week. ” It was also confirmed that Cruz’s next film will be with Banderas and will be filmed in Spain.