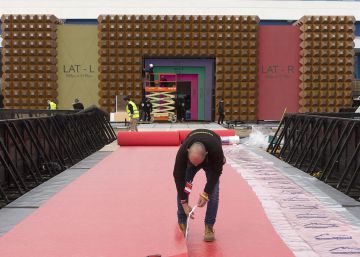 If the relationship between Malaga and the cinema were a movie, it would be a romantic one. With protagonists who start as friends and end up falling in love. With plots full of ups and downs, reconciliations and much glamor. The Goya awards gala, held this Saturday, would be the climax. The extras, the 3,200 guests who will attend the ceremony at the José María Martín Carpena Sports Palace. And the secondary, a luxury: The list of actresses and actors of Malaga's cradle is long. The honoree with the Goya de Honor, Marisol and the candidate as best actor (who also opts for the Oscar) Antonio Banderas, are the best examples. Not forgetting who holds the record of nominations, Antonio de la Torre, who accumulates 14. María Barranco, Miguel Herrán, Kiti Mánver, Maggie Civantos, Adelfa Calvo, Joaquín Núñez or Salva Reina are also children of that relationship between the capital of the Costa del Sol and cinematography.

After Barcelona (2000) and Seville (2019), Malaga is the third city that hosts the Goya Awards gala beyond Madrid. Last year, when the events in the Sevillian capital ended, the president of the Film Academy, Mariano Barroso, said they go wherever they want. Malaga soon raised his hand. Shortly and two million euros later, the wishes of the capital of the Costa del Sol became a reality. The Academy returned the gesture by programming two weeks of activities - “twice as much as last year in Seville”, they underline from the institution - that have made citizens live immersed in a cinephile bubble.

“If there is a place that lives the cinema is Malaga. We are convinced that people will turn to the awards, ”said Silvia Abril, who along with Andreu Buenafuente will present the event. Indeed, citizens have done it despite the bad weather this week. They were able to take a picture with a replica of the prize or in a reproduction of the photocall through which the stars will parade. Going to the gala is another story. Even the institutions that have defrayed the expenses have had problems to distribute the 60 double tickets that corresponded to each one. Another option, only for American Express customers, was to acquire them at 1,600 euros per person.

There have also been queues in front of the Albéniz Cinema to attend the screenings of nominated films with the presence of one of its protagonists. The first was Antonio Banderas, just two hours later to know that he aspired to Oscar. Then Antonio de la Torre. Benito Zambrano, Natalia de Molina, Santiago Segura, Toni Acosta… “We are enjoying the activities,” says Rakesh Narwani, director and producer of Objective 50 Film. "The Goya are a prize for the city and the icing to place Malaga in the focus of the audiovisual world at the national level," said Malaga.

“Everything that encourages the arrival of shootings and the creation of industry here, like the gala, seems to me a success,” adds Salva Reina, protagonist of Malaka, one of the series that have had Malaga as the protagonist in 2019, as well as Toy boy or Costa del Sol Brigade. Many others have been filmed. The crown Y Warrior Nun, both from Netflix, are the tip of the iceberg. Only they have left 17 million euros in Malaga land, although the global investment of the 186 shootings that were held in 2019 amounts to 23 million, according to data from the Malaga Film Office. "That the Goya put Malaga on the map is good and that people can approach Spanish cinema, a great idea and opportunity," insists Peter Welter, executive producer of Fresco Film, which since he was in charge of filming Game of Thrones It has not stopped growing.

Welter, however, wonders: "The two million that the city has spent on this gala could not have served to create industry, to become a center of real audiovisual production?". Its feeling is that of the audiovisual sector: the Goya bring few long-term benefits. In short, it is the hospitality that smiles the most, with an increase in hotel occupancy and more restaurant reservations. The slope of January has had, this year, less pending.

The spotlights will be lit on Saturday in a transformed sports palace. The initial quintet formed by the Unicaja players every week will be replaced by the tandem formed by Silvia Abril and Andreu Buenafuente, who have promised a visual and dynamic gala. Jamie Cullum, Amaia or Rayden will perform, Banderas will show part of his musical To Chorus Line and Marisol will defoliate the daisy from her presence to collect her prize. When the lights go out, the movie starring Malaga and the cinema will not decay. In less than two months, between March 13 and 22, a new edition of the Malaga Festival will arrive, whose teams already work at full speed. The curtain never closes in the celluloid city.