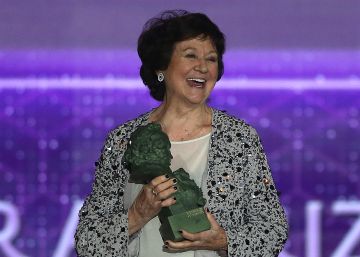 Pedro Almodóvar personifies as few the invisible (and in many ways tragic) split between the rural and urban world of a country that has in this creator one of its contemporary metaphors. A man of strong and determined character, whose solid roots are based on the hardness of the austere countryside where he was born and grew up, but who flourished with the vigor of the elect in Madrid, a city that is also the daughter of that dichotomy between field and progress. Without that symbiosis there would never have been Pain and glory, the movie that last night took the deserved honor of the Goya. Almodóvar picked up the award for the best touched address after hearing Antonio Banderas thanking him for so many things. But the filmmaker did not pull emotions when his turn came and talked about what matters to him, the cinema. That is why it was so relevant that his words were to defend the films that occur in the margins, an author's cinema that needs more than any other the sensitivity of the spectators and the politicians and that he has in this passionate filmmaker his best accomplice.

When he picked up the Goya for the best original script, he remembered the current of the river of his childhood, the place where his mother was washing clothes with other women in her village. Almost imperceptibly, he murmured that he continues to miss that river today. It's funny that two movies in the narrative and industrial antipodes like Pain and glory Y What burns (Oliver Laxe's film that represents those margins that the Manchego filmmaker defended last night) are complicit in something essential: his vindication of a rural world that, whether through a river to wash clothes or a forest in flames, is part of the identity and passion of these two filmmakers. In both, a son and a mother represent a closed world that can only be understood and explained from the experience of the field.

Laxe came to the Goya with his eyes painted with khol like an Almoravid prince, and Almodóvar with those sunglasses that protect him from light and somehow symbolize the fragility of a giant. Both represent the best of a Spanish cinema that ambitions and achieves transcendence.

The prizes started with the octogenarian Benedicta Sánchez, the unforgettable mother of What burns, climbed on a stage that was so strange that he did not hesitate to ask for help from those who applauded her. Its presence was enough to evoke not only a landscape but nature itself. His character, like Penelope Cruz and Julieta Serrano in Pain and glory, they represent motherhood understood in a telluric way, although one speaks Galician and the other the Castilian of La Mancha. Before them, the hostility of the world disappears. Like when Benedicta is reunited with his son after jail and just asks if he is hungry. Or when Almodóvar's mother, who talks about shrouds and neighbors, heats the cold floor of a station with her body so that her son sleeps at home.