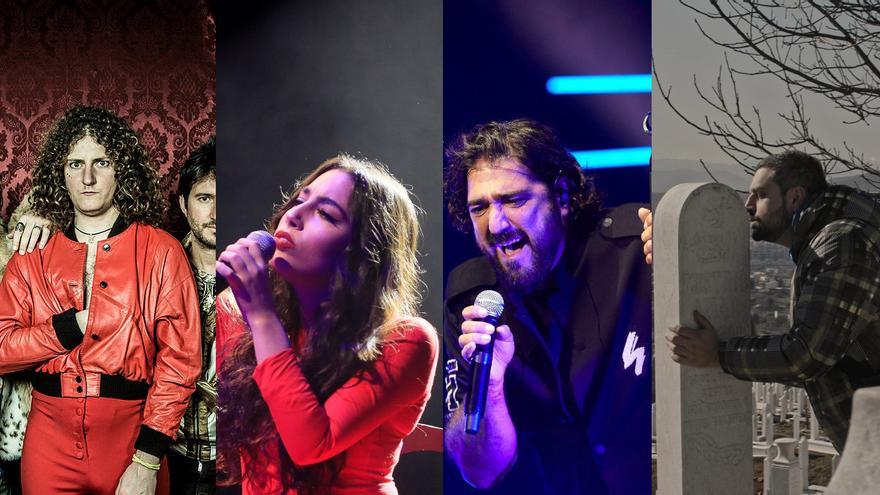 There were 69 songs nominated for Best Original Song at the Goya Awards. Composers like Christina Rosenvinge were left out (Karen), Alejo Stivel (be careful what you wish for), Baby (To all train destination Asturias), Star Morente (Life was that), Fee Reega (The inocents) or Javier Lemon (Joy), news for the publication of his memoirs as a producer.

The myth of the 'supernominated' to the Goya: do not confuse favorites with winners

The Goya Award for Best Song in 2021 went to Rozalén, with her song No, no of the movie rose's wedding, by Iciar Bollain. A few months later, Rozalén deserved the National Prize for Current Music.

'Burst Out', the twilight song

Xavier Capellas, with lyrics by Àngel Leiro and voice and arrangements by Jean-Paul Dupeyron, composes burst-out for the film based on the work of war photographer Gervasio Sánchez on the siege of Sarajevo Post war album. One of its co-directors, the film and television director Àngel Leiro, is also a co-composer of the song. Dupeyron is a composer and arranger, and the Catalan jazz musician, composer and orchestrator Xavier Capellas has two nominations in his career for the Gaudí Awards of the Acamia del Cine Catalán.

The theme is an American genre song, with an evident protagonism of the vocal performance, which conveys post-conflict desolation. Capellas admitted that he was looking for a sound similar to Nick Cave's Grinderman. Leiro sought inspiration for the lyrics in Bosnian poems.

'Let them look for me inside', the nostalgia moment

Antonio Orozco sings the song he has co-written with Jordi Colell Pinillos for a film as musical as the cover, directed by Secun de la Rosa and which is located in Benidorm. Two young people star in a story of personal search, records, parties and fear of failure.

Orozco has had a two-decade career characterized by romanticism with a touch of flamenco, a genre he delves into that they look for me inside, his candidate for the Goya.

Andalusian rock group Derby Motoreta's Burrito Kachimba with influences from progressive rock, flamenco and psychedelia, in a style they call kinkidelia, they have composed The laws of the border, the song from the film of the same name, directed by Daniel Monzón and which received six nominations. The style of the group fits very well with the year to which this film travels, which is also a story of transition to adult life, in this case a 17-year-old boy who lives in Girona and is involved in a love triangle and juvenile delinquency .

'The sea awaits you', the song from "the odyssey of our century"

"I believe in the law of the seas, where no one is illegal, while the law of men is crueler than that of the sea," sings María José Llergo with a chilling voice on a mattress of ropes for the film Mediterranean, by Marcel Barrena, who arrives at the Spanish film awards with seven nominations. A theme full of emotion, hope, life and also death. Llergo is a 28-year-old singer from Córdoba who has released her first album, healing, in 2020. His first published song, girl of the dunes, It was already a success in 2018 and was cataloged as "a stir of flamenco".

Mediterranean is the film that tells the story of two lifeguards who travel to Lesbos in 2015, during the refugee crisis and create a maritime rescue group.

Its soundtrack, composed by Arnau Bataller, is also nominated for Best Original Music.