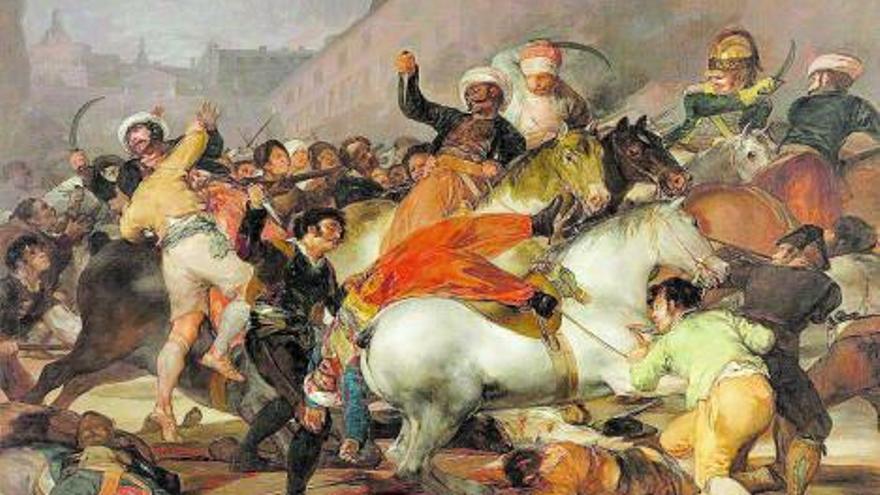 “At this stage, the Aragonese artist demonstrated an extraordinary ability to relate and empathize with those people from whom he can learn and obtain personal and intellectual benefits. He will move in enlightened circles and will deal with the most important people in the culture and politics of that time ”. The person who pronounces these words for this newspaper is José Manuel Matilla, head of conservation of drawings and prints of the Museo Nacional del Prado, who gives the keys to draw the first liberal sketches of the artist that will be reflected in a marked way in his most personal works.

Mark McDonald, curator of the Goya exhibition that is currently being offered by the Metropolitan Museum of New York, draws a second trait: his empathy with those who suffer from History. “His illustration comes from his friends in Madrid, yes, but more importantly, from his own perception and understanding of people, his intelligence and his sympathy for those in society who suffer the most.”

Goya will develop a double life. The one who made money and prestige, Don Paco. The one that stood out first by producing tapestry cardboard for the Royal Factory; the one who entered the San Fernando Academy of Fine Arts with his risen Christ adapted to the taste of the institution and, once in it, escalated responsibilities; the King’s painter with Carlos III and the Chamber painter with Carlos IV; the portrait painter of aristocrats, nobles and people of high birth. On the other hand, we observe the painter who denounced the evils of his time with a scathing and satirical production that he took from his notebooks to prints.

This presumed bicephaly does not convince Matilla, who above all perceives “an essential Goya” throughout his life. “Above all, he is a professional painter, and as such, he knows what he has to do. What he does for the aristocracy is perfectly compatible with what he is doing for himself ”. What Nigel Glendinning, one of the great experts in the Fuendetodos painter, defines as “a very accurate portraitist’s eye”, Matilla expresses first in the form of a categorical headline: “He is not a flattering painter. Later, he develops it: “Goya satisfies the needs of the society of the moment. Paint people as they are. It reflects his psychology, what he sees of each one, but far from any idealization.

The decade of the ‘Caprichos’

If there is a central event in your life that has caused rivers of ink to flow, that is the disease that became deaf in 1793. Four years ago, in 2017, the University of Maryland presented a study that pointed to Susac syndrome, a rare autoimmune disease that affects the small arteries of the brain, retina and cochlea, as the cause of hearing loss. It is not the only one and who knows if it will be the last hypothesis about the evil that afflicted the painter. In almost 100 years of exhaustive analysis begun by Dr. Royo Villanova, theories of all kinds have not been lacking, many of them already denied. From arteriosclerosis and the sequelae of a childhood mumps otitis raised by the professor at the University of Zaragoza to a hypothetical syphilis, Menière’s disease, a cerebrovascular accident or lead poisoning.

Beyond the clinical discussions, what does seem widely accepted is that his universe has changed. The painter entered a phase of introspection and isolation, which turned him into his inner world and sharpened his perception of his surroundings. McDonald exemplifies this in his 1796 self-portrait, “a masterpiece of observation.” Less blunt is pronounced Matilla. In his opinion, it is indisputable that these personal circumstances affected his work, even beginning his production outside of private commissions. However, he is reluctant to see breaking points and emphasizes the evolution of a coherent painter who “flows with the same honesty” while adapting according to what he wants to tell.

While he attended to orders and portrayed with extreme elegance and exquisiteness the Duke of Osuna, the Marchioness of Santa Cruz or the Duchess of Alba or dotted Madrid with his art of a religious nature, he wove his most poignant and ironic thoughts in his first notebooks. . The sketches waited with zeal in privacy, setting the substrate for his future series. Small, uncomplicated in form, deep in substance.

If we could divide his works into watertight departments and define them in a few words, it could be said that Los Caprichos is the faithful product of an illustrated artist in times of intellectual dispute. A wedge to open a channel of class structures governed by custom and the dictates of religion on consciences.

The 80 engravings that make up the Caprichos are a summary of the compositions included in albums A and B and in the series Dreams made between 1794 and 1797. Published in 1799, McDonald sees in it the intention of reflecting the concerns of society in the who lived, marked by superstition, ignorance, fear, poor education or vanity.

Matilla goes further with this argument and points out a clear moralizing intention. “Goya is within the enlightened movement, he believes in the perfectibility of the human being. He defends that he can be transformed through education and the correction of customs. This is how the Caprichos raises ”. As a comparison between witchcraft and ignorance, as the moral degradation that the prostitution of women and marriages of convenience entailed. Incapable teachers and doctors are represented as donkeys. Also an aristocracy that rested the privileges of its position on the backs of the popular classes. The religious will not escape her, with monks represented as goblins loaded with sinister, demonic connotations to criticize esotericism, superstition and abuse.

His gaze, directed to seek a transformation, collided with the strongest power that he could find in those times of revolutionary panic. Just two weeks after publishing the engravings, Goya decided to withdraw them for fear of the Inquisition. Once he was saved, it was time to secure his collection. He chose an imaginative route: to put the plates and the unsold copies at the disposal of the Crown and the Royal Calcography. In the middle of the following century, a second print run of the 80 copper plates and stamps would see the light.

“There is a moment when we can see a breakdown in their trust in the human being.” Matilla refers to a key moment in Spain in the recently opened 19th century: the War of Independence. October 1808, Zaragoza had resisted the French siege and General Palafox required Goya and other artists. The military’s intentions are clear: “To see and examine the ruins of that city, in order to paint the glories of those natives, to which I cannot excuse myself for being so interested in the glory of my homeland” as documented by El Prado a Through a letter that years later the painter himself would send to José Munárriz, secretary of the Academy of Fine Arts. The original title of the series, Fatal consequences of the bloody war in Spain with Buonaparte and other emphatic whims, gives a first indication that it was not going to conform to the heroic pretensions of the commission.

“There is a tendency to speak of Goya as the first war reporter or journalist. It’s not like that. He is an artist, not someone who goes to a place and selects the images ”, clarifies the head of conservation of drawings of the Prado. The painter would travel to Zaragoza for a week. There he would see the destruction, the dead, the barbarism, the ruins. Could there be anything further from progress than war?

After a brief stay in Zaragoza, he began to sketch the sketches of the future series of 82 prints in his album C and he would engrave the plates between 1810 and 1815, after the war was over and absolutism was restored in the figure of Fernando VII. For this reason, Matilla insists on separating this work from any kind of chronicler: “It is the result of someone who has seen many things, others have read them, others have described them through a written paper and others have seen them through of other images and engravings ”.

The product of Goya’s gaze did not satisfy the needs of the time. The series, renamed The Disasters of War, did not see the light of day until 1863. His conception of the war moved in the opposite direction to the power’s needs to show heroism against the French. Without idealisms, with the unreason of the human being in the foreground. High epic often turns tragic when distance is lost.

“Some of his paintings have been used ad nauseam in history books to stage the defense of the Spanish against the French. Is May 2 heroic? ”Asks the Prado curator. “Is a painting heroic where we see a terrified Mamluk and a crazed Spaniard stabbing the corpse of a French soldier? Even when he responds to official initiatives, the real Goya comes out and does so by telling us what he has felt, even if this does not fit what is desired of him ”.

Matilla also affects a facet of Goya, that of the thinker. “Goya is an intellectual. If you dedicate yourself to looking at the titles of your drawings or prints, you can see that it has a conciseness and a clear intentionality that tells us that you know how to handle language ”, he says. Infamous profit, Ravages of war, Populace, Why, Barbarians. Titles that define unreason. Beyond being an X-ray of a historical moment, the value of Los disasters transcends its time. “It reflects the essence of war in capital letters. He is teaching us unlimited violence, revenge, the suffering of the population, violence against women, orphaned children … It is everything we see every day in a war, but it is not a war in particular. It’s any war, ”says Matilla. Despite this, he still observes in the series glimpses of hope in Goya’s attitude. In one of the last engravings, a grim image shows a young woman lying on the ground, surrounded by clergy who are preparing to bury her: The truth died. In the next, he reappears. If he will resurrect? Goya wonders.