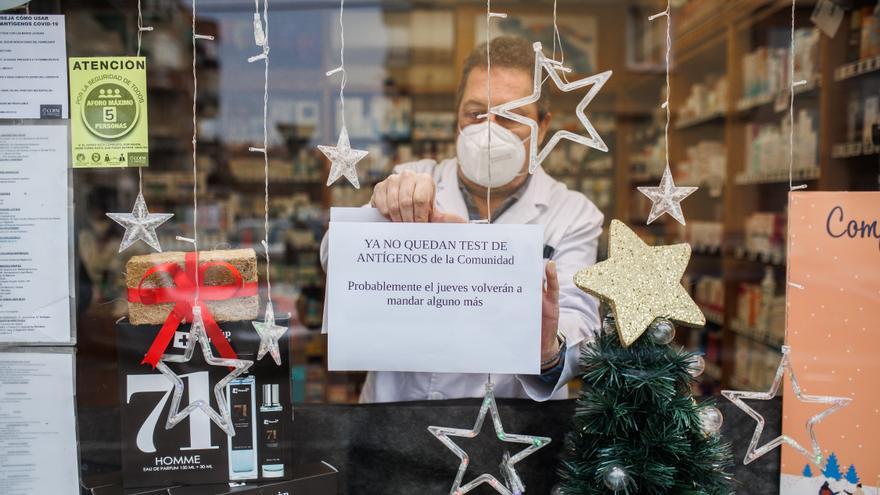 Some experts have called it "the boring apocalypse", a way of defining all the risks that do not come from a specific and easily observable event, let's say the eruption of the La Palma volcano, and that cause vulnerabilities to which it is more difficult to elaborate a rational response. Or it is more difficult for the Government to convince you about the appropriate one. The pandemic could fall into that category from the moment that vaccination has spread and the risks exist and are very real, but they are not the same as in 2020.

Due to the characteristics of omicron, we find ourselves in Europe facing a pandemic episode in which the individual risk for each citizen has not grown dramatically, but has grown on a collective level due to its foreseeable catastrophic impact on the hospital system.

With people already exhausted by the never-ending pandemic, governments had a complicated challenge ahead in Spain. It cannot be said that they have come out with a note from this last mess. The central government decided long ago that the era of tough restrictions was over. He was not going to have the support of the PP, no matter how much some autonomous governments of the PP asked for it, and he was aware that in Madrid his rejection had been the key to Díaz Ayuso's electoral success.

The Madrid president had managed to cover her management errors with a defense of freedom based on ignoring the reality of the pandemic. The most accurate criticism was received two weeks ago from a fellow party member. "It is important not to get infected in order to be free," said Murcian President López Miras in one of the most memorable phrases of these two years. But politics is not always based on choosing the best solution for every problem. At least, the Madrilenian voters do not think that way.

In the UK, a similar strategy has sunk Boris Johnson in the polls. In Madrid, he gave Ayuso a clear victory at the polls.

Cornered by itself by ruling out tough measures and limited by the Constitutional Court ruling, the Government did not have many weapons to face the sixth wave. This week, it would have been good to consult the bibliography on risk psychology.

On the one hand, he put his chips in the box for vaccination through the booster dose, which is a necessary step. Everything else would be "complementary measures", in the words of Pedro Sánchez. Vaccines would allow us to face the increase in infections with "peace of mind". In other European countries, they are not at all calm.

At the same time, the Government decreed with the BOE published on Thursday the return of the mandatory mask outdoors. It was a measure requested by no less than seven regional governments. By accepting it, Sánchez made it his own, with which it must be assumed that he will assume the greatest wear and tear. It is known that the default position of many autonomous governments is to demand that their powers be respected except during the pandemic when they do not want to be alone and demand that the Government bear the cost of unpopular decisions.

Sánchez did not want to explain clearly after the presidents' conference the terms of the return of the mandatory mask, probably because he did not want the media to choose him as the head of the day. The ruse was doomed. He recalled a bit of when he tried to get journalists to call not a curfew, but a "restriction of night mobility."

The problem of the Government is that it is difficult to understand the idea that the pandemic is in a phase that no longer requires limiting the hours of leisure establishments or closing them at night, while the mandatory mask is recovered on the street. The Minister of Health affirmed on Thursday that the measure is "endorsed by scientists in various countries such as Germany and the United States. "These studies, which are numerous, refer to the ability of the mask to stop infections where it is easier for them to occur, indoors, not specifically outdoors where the risk is low.

If a measure is easily ridiculed for a cartoon from El Jueves, it is clear that its sale will not be easy.

Leaving her outdoors, except in clearly crowded situations, had been one of the few psychological victories for the citizens. Going back is a tough step. It is not a drama, but it is hardly compatible with what they are seeing in health centers in regions such as Madrid and Andalusia, where Primary Care is collapsed. The use of this word is correct if you cannot make an appointment to see your GP for a week or two, or even later. Many citizens believe that governments are not putting sufficient resources where they are most needed.

Although the regional governments were waiting to see what would happen at the conference, it is true that they have begun to take action. Catalonia, the curfew. Murcia, the closure of non-essential activities from one to six in the morning. Balearic Islands, the COVID passport in bars. Aragon, advance the closing time. More or less slowly, they all move. Less Madrid, obviously.

Madrid registered this Thursday another record of registered infections, 20,195. In the UK, the Western European country with the worst data now is the UK, which had nearly 120,000 in one day. The British population (67 million) is ten times that of the Community of Madrid (6.7 million). Moving the Madrid incidence to the United Kingdom would raise them to 200,000.

Díaz Ayuso has trusted everything to antigen tests, as if checking the level of infections was the same as preventing them. At the time, he won the headline that interests him with the promise of delivering a test to each Madrilenian. The bad thing about living for the headlines is that you also die for them. The consequence was images of long lines in front of private laboratories and posters in pharmacies that said that they had not reached them or that they did not have any because of the high demand.

It has also happened in other cities. Madrid stands out above the rest as it has become the city of queues. Queues in front of the Primary Care centers overwhelmed by the pressure of care. Queues within the emergency room where some doctors have to attend to those who do not receive an appointment at the health centers. Queues in front of pharmacies to buy antigen tests. Queues in front of the laboratories to get a PCR done. Queues at the Zendal hospital where hundreds of people were waiting to be vaccinated by a bunch of nurses.

Who was going to tell Ayuso that she would be worthy of the honorary title of Queen of the Tails.