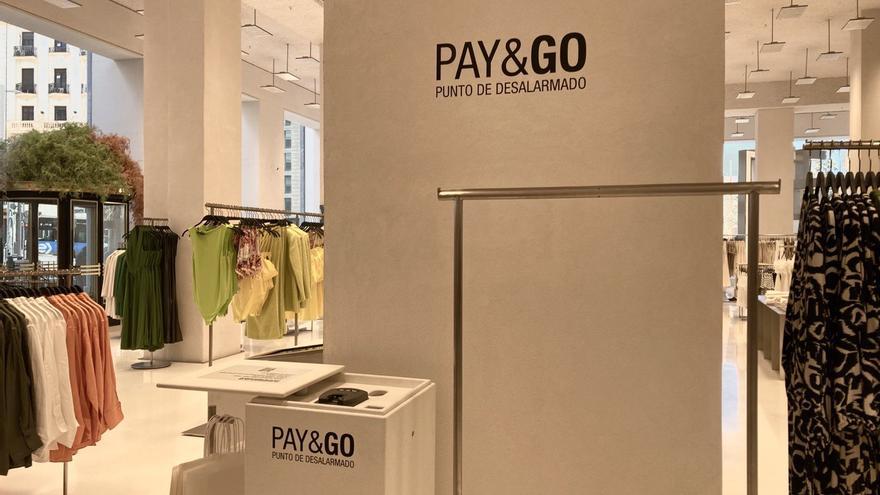 A store where changing rooms are reserved through an application and in which purchases made on the internet are collected and returned without having to speak to any employee: a QR code, a screen and a robotic silo that delivers or collects the packages is enough. This is the new store model Inditex in Madrid's Plaza de España, which indicates where the sector is going.

A local, baptized as the largest Zara in the world, which occupies about 7,700 square meters, between commercial space and warehouse. The multinational rents the lower part of the Spain Building. An property that in recent years has experienced several corporate operationsuntil it was finally occupied by the Riu hotel group and two Inditex premises.

It is Zara and a Stradivarius, but it is the first store that concentrates a large part of the technological changes that the Galician group is introducing and that reflect the evolution of commerce and, to a large extent, the employment model in the sector, that is no longer only linked to direct dealings with buyers.

These new stores show, depending on the sector, a trend that is not the majority but has accelerated with the pandemic: the requirement that online purchases be delivered or collected in a single day, if possible in a few hours; and that customers increasingly ask for a personalized and differentiated experience when they go to stores but, at the same time, they have no problem carrying out actions on their own that have traditionally been carried out by employees.

This is what happens in the new Zara. In it, customers can go through the entire purchase process without having to interact with the staff that works in the store, or do so as little as possible.

With the brand's app, they can reserve fitting rooms, which send a notification to their mobile when their turn comes; reserve and block items from the warehouse for two hours so that someone else does not buy them or pay with your mobile with a Pay&Go function. And, at self-checkout, it's customers who unpack items and bag them before walking out the door.

As explained by the Galician group during the presentation of Zara, it is about balancing the need for a more traditional store model, with another based on new technologies and that dilutes the differentiation between physical and online stores.

Actually the change of model is not new. Both Inditex and other retail giants have been turning for some time towards places where technology is gaining ground and where the physical space of self-checkout boxes is expanding, which in theory reduces waiting times. The same thing happens, for example, in the hypermarkets of Alcampo or in the establishments of the Decathlon sports chain, among others.

In the presentation of the new Zara, Inditex assured that despite being more technological this model does not entail a reduction in staff compared to other less digitized stores.

This new establishment, he pointed out, employs 200 people and is larger than others because it has more space to show collections, including some that until now were not in a physical store, such as lingerie or sportswear. In fact, the group has been closing small premises for years to focus on the large ones, with more surface area, which has required relocating the affected staff.

Five years ago, the company founded by Amancio Ortega opened what was then the largest Zara in the world, again, in Madrid, but in another area, in Nuevos Ministerios. In that case, 6,000 square meters -compared to the 7,700 of Plaza de España- and a workforce close to 180 people, as indicated at the time.

In this way, as a reference, in the new Zara store there is one employee for every 38.5 square meters while in Nuevos Ministerios it is one for every 33.3 meters.

It must be taken into account that, in both locations, part of the warehouse space is used for shipping products from online sales; and not only to cover sales in the establishment itself; and that the staff has also moved towards that distribution model. Therefore, you have to dedicate yourself to the preparation of shipments. Some online sales that for the Galician company are about 25% of its turnover. In other words, it sells 7,491 million euros online.

The workers' representatives also explain that the new store model entails a change in the workforce, in functions and in training. CCOO details that this digitization has been one of the topics discussed in the Monitoring Committee of the Framework Agreement at Inditex and that it involves the development of new functions by employees and, therefore, greater specialization.

The change in the commercial strategy of the large distribution companies is justified by the demands of some customers who want more immediate deliveries and a digital and personalized shopping experience.

Four years ago Amazon launched a store where there were no employees or checkouts -everything was done with an application- and that it is extending through the Whole Foods chain, the supermarket company it acquired in 2017. For example, in one of his supermarkets in Washington, customers pay by passing their hand through a scanner, which identifies physical patterns that are associated with a credit card.

The consulting firm McKinsey points in the same direction. Based on a survey conducted in the United States, she argues that the coronavirus has accelerated the changes. He assures that, according to that market study carried out in 2021, 70% of buyers who began using self-checkout boxes during COVID would continue to do so after the pandemic.

On the other hand, the consultant highlights that, the more digitization and use of applications, the more risks linked to technology. "Companies face more threats from cyberattacks and growing risks related to the use of data," she assumed in a report prepared at the end of 2021.

"In the face of increasing sophistication in cybercrime and mounting regulatory pressure, brands urgently need to act to shore up their defenses and invest more to make digital security a strategic imperative." In that same report, the majority of managers surveyed in the textile sector (53%) saw it as likely or very likely that their company would suffer a cyberattack in 2022.