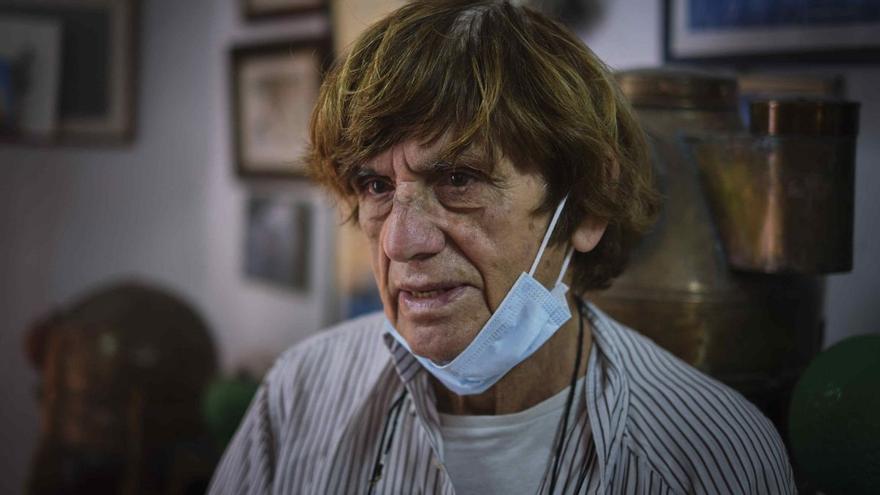 He lived without a master and without a boss, faithful to his independence ideals. This is how Edey remembers his father, who worked for two years in the Spanish guinea to then travel the world in the 'Pirates ships'. your house in Crispin Valley smelled of saltpeter with the navigational utensils that stored in his particular museum.

Juan Antonio Fernández Armas was a born fighter, in love with his Canary Islands of which he not only raised the flag of independence from his friend Antonio Cubillo, but his feeling led him to the ultimate consequences by consuming only local products. He stood up to life, until he overcame colon cancer and twenty heart attacks, like the one he suffered on Monday morning.

Born March 26, 1947, Juan Armas, as many called him, was proud to be the last cambuyonero of Tenerife, "a man who lived his life as he wanted," says his son Edey. His combative spirit betrayed that he loved his land passionately, as evidenced by last October in a report on the demand for public transport for Valle Crispín, in Tenerife, in the upper part of María Jiménez, as well as the request that the City Council pay for the connection of the sewerage network to the network installed by the Cabildo. He died without seeing these aspirations fulfilled.

Among the expressions of condolence for his death, a mechanic who designs engines that are built in China He shared his gratitude with the son of Juan Armas for how much he helped him start his workshop, as he sold him some blades that came from a burned ship in the port of Tenerife that cost 2,000 pesetas for twenty dollars.

Juan Armas stored, in his home in Valle Crispín, treasures such as rudder and anchor Junquito, the ship that machine-gunned the Polisario, to which are added propellers, propellers, bells... During the visit last October, the last cashier, son of a mother born in San Sebastián de La Gomera and his father from Lanzarote, showed the steering wheel of a ship made in Japan seized because it was dedicated to cocaine trafficking and sentenced to scrapping. In his life he sold more than 70 rudders and had 40 sextants and a fortnight of logs. Received even orders from England to repair propellers.

Juan Armas –one of six brothers– grew up on San Juan Bautista street, in the El Toscal neighborhood, and he studied his first letters at the Onesimo Redondo school. Since childhood he was in contact with the port where his father worked as a stevedore, loading and unloading. With humor, he remembered when, at the age of 16 and 17, he would sell to the ships that had arrived at the pork rind and the visitors would throw coins at him, and then embark on the Frigate Pizarro and serve in the Spanish guinea, from where he returned in 1969, to work three years later with Russian ships. On his adventure around the world on 'pirate ships', claimed to have dodged two shipwrecks, one in Greenland on a Danish-flagged ship and the other to the Republic of Togo, where he was on a German ship. It was an adventurer of life who even sailed among sharks in a Nigerian corvette in monsoon winds.

The port change in Santa Cruz de Tenerife meant the closure of its activity, which did not prevent him from continuing to seek life in other destinations until the last day as cambuyonero by vocation and profession.