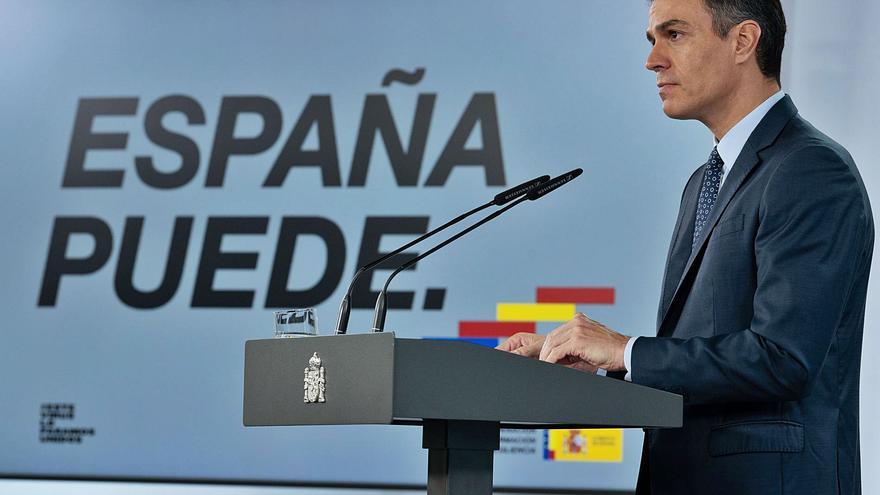 The Canary Islands is the only community that will be excluded from the curfew that the central government decreed yesterday to face the escalation of coronavirus infections. The Executive of Pedro Sánchez yesterday decreed a new state of alarm, the fourth of this democracy, throughout the Spanish territory to give legal protection to this measure, which limits the mobility of citizens between 11 p.m. and 6 a.m. A nightly confinement that will not affect the Archipelago due to the lower incidence of the virus that exists in the Islands.

This was detailed yesterday by the President of the Government, Pedro Sánchez, during the press conference in which he announced this measure agreed in an extraordinary Council of Ministers. “This limitation will be applicable throughout the country except in the Canary Islands, due to the good epidemiological data of the Islands,” said Sánchez.

The reason why the Canary Islands have been excluded from this restriction is in their contagion figures, which are the most favorable in the entire State. Currently, the Islands register an accumulated incidence in the last 14 days of 82.7 cases per 100,000 inhabitants, being 44.3 cases in the last seven days, figures that are half of those registered at the beginning September and which are very far from the national average, which currently stands at 378 cases per 100,000 inhabitants.

The positivity in the Canary Islands is also the lowest in the whole country. Only 2.5% of the tests carried out had a positive result yesterday.

The Government of the Canary Islands had already requested last Wednesday to be left out of the curfew that was being considered to apply throughout the country, after the requests made by some autonomous communities. Finally, the central executive has met the demand of the Islands and will not apply it in the Archipelago.

The president of the Canary Islands, Ángel Víctor Torres, valued this decision yesterday, considering that “for the moment, it is not necessary for any curfew to be imposed in the Canary Islands.” The regional official said that, with the entry into force of the new state of alarm decree throughout Spain, the autonomous governments have a common framework that offers legal certainty to make the appropriate decisions in the fight against the virus.

In addition, Torres pointed out that the decree “allows the adoption of proportional measures, taking into account the evolution of the pandemic in each territory”, something that from his point of view “is the right thing to do, because we are not all experiencing the same situation,” he remarked .

Torres also recalled that if it has been possible to have the most favorable data in the country “it has been thanks to the commitment and awareness of the Canarian population, which has complied with the preventive regulations that began to be taken in August to control the pandemic” . Some of the regulations that were already adopted by the Canary Islands two months ago were the cancellation of nightlife, the limitation of the number of people in meetings, the prohibition of smoking by walking or if two meters away are not kept, the increase in surveillance and increased penalties.

Torres stressed that “these rules have given good results”, however, he insisted that “the guard will not be lowered and the necessary measures will be taken depending on the evolution of the pandemic in the Archipelago and the indications of the experts” .

Also the vice president of the Canary Islands and Minister of Finance, Budgets and European Affairs, Román Rodríguez, was satisfied yesterday by the exclusion of the Islands from the state curfew and affirmed that the credit goes to the island’s citizens. “Our good epidemiological evolution is a merit of responsible citizenship, government measures and reinforcement in Health and Education. However, we must not lower our guard ”, he asserted.

On the other hand, he appreciated that the new state of alarm “strengthens” co-governance, since, he recalled, the management of the same falls to the autonomous communities and gives legal certainty “to apply measures to restrict mobility or others, if necessary. ”.

The state of alarm decreed yesterday has very different characteristics from the one decreed in March to face the first wave of the coronavirus. It is less strict and gives the autonomous communities a greater margin of action. In addition, the Executive intends to extend it until May 9, –for which it will last more than six months–, and will request it in the Congress of Deputies this week.

With this mechanism, the central government seeks to avoid the extensions every 15 days that it had to carry out during the previous state of alarm, which on many occasions were approved in an agonizing manner and which precipitated its completion earlier than planned.

There are five main measures included in this new state of alarm and which were explained yesterday by the President of the Government, Pedro Sánchez. The delegated authorities will be the regional presidents (unlike the previous one, where the responsibility fell basically on the Minister of Health, Salvador Illa), and the territories will make their decisions in cooperation with the Government. In addition, circulation will be prohibited between 11 p.m. and 6 a.m. in all of Spain, except in the Canary Islands. In that strip, it will only be possible to travel for justified reasons, but the autonomies may extend or restrict the term.

The autonomous communities will also have the capacity to limit the exit and entry of their territories, totally or partially, either in full autonomy, in a municipality or in a neighborhood. Fourth, the territories may restrict meetings to a maximum of six people or even less, as long as they are not living together.

And finally, the central government, in an unprecedented initiative, will approve a six-month extension of the alarm on Tuesday, for a few days later to ask Congress for approval. Even so, to avoid being accused of avoiding accountability, Illa will appear every 15 days in the lower house.

The presidents of each community may activate or deactivate the restrictions for the duration of the alarm, depending on the epidemiological reality of their territories. Now, from the outset, in these first 15 days of application of this royal decree, the curfew enters into force throughout Spain, except in the Canary Islands. It will be already from the extension when the autonomies will be able to lift it or maintain it.

The president has it much easier than a few months ago to achieve the extension of the alarm. Ciudadanos already announced on Friday that it would support, and yesterday its leader, Inés Arrimadas, reaffirmed the support. The Basque Government also applauded the measure, so the vote in favor of the PNV is assured. Euskadi was the first community to request the alarm, and Catalonia joined later, something that foreshadows the support of ERC and JxCat.

Only with the seats of oranges and Basque nationalists, the national Executive has assured the extension of the measure. But Moncloa wants the PP to vote in favor. None of the autonomies governed by the conservatives has requested the alarm, unlike the rest, and Pablo Casado was very critical months ago with this tool, something that makes it difficult for him to join now. Sánchez spoke with him yesterday, but did not want to reveal the content of the conversation with the opposition chief, who also avoided taking a position.

Advancement of the decision.

At first, the chief executive wanted to wait for today’s conference of presidents to approve the state of alarm. But the cascade of requests for him to take that step pushed the measure forward. Castilla La Mancha, Navarra, Cantabria, La Rioja, the Balearic Islands and Asturias, six of the nine communities that claimed it, expressed their satisfaction with this measure, while the PP has criticized the “confusion” it represents for the population.

Sánchez yesterday set the goal of reaching an incidence below 25 cases per 100,000 inhabitants and pointed out that the six-month period for the state of alarm “is not fixed” and stated that “if we can overcome the emergency sooner, it will cease to apply.” The president also conveyed his belief, but not complete assurance, that the goal can be achieved “without resorting to global lockdown.”