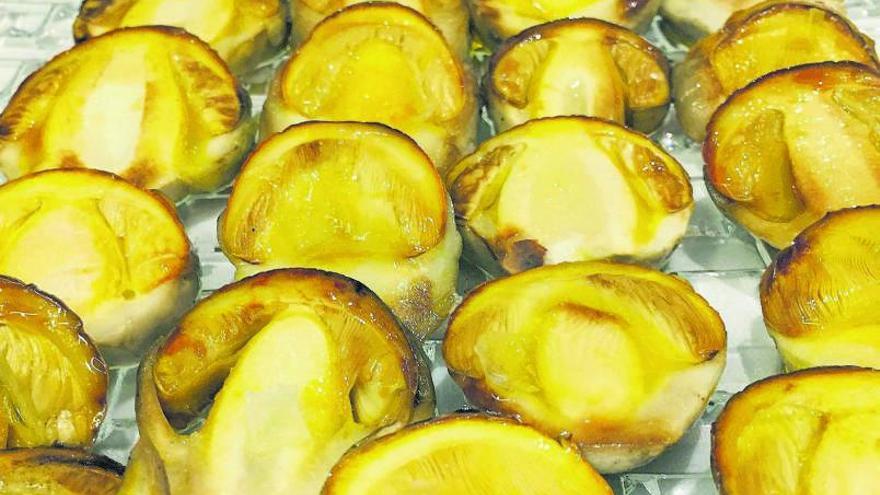 It is Caesar’s mushroom, because César Augusto had them brought to him by special couriers on horseback from any corner of the empire, Hispania among them. The Romans called it boletus and for its quality they placed it at the height of the ambrosia that no one knew for sure what it was, but it was associated with the food of the gods. Its history is also linked to that of Emperor Claudius, who was very fond of the same story that cost him his life when Agrippina, his wife and Caligula’s sister, substituted this mushroom in a meal for the deadly amanita phalloides, causing his death and the rise to the throne of his son Nero. A few years later Nero thanked him by ordering his death.

The good Caesar mushroom should be distinguished from the false oronja or fly agaric, with a reddish or scarlet hat, which is toxic and has psychoactive properties. The unmistakable characteristic between the two is that both the foot and the blades of the caesarean section are of an intense cream color while in the muscaria they are always white. And much more to differentiate it from the amanita phalloides, which, as you know from Claudio’s tragic end, is deadly. As Josep Pla summarized in What we have eaten, the amanitas make up the trinity of the good, the dangerous and the lethal mushrooms.

Mushrooms are vegetables that nobody sows, you have to look for them, in the runs, during the sunny hours that follow the rain. Those that are not in the fields are found in good specialized greengrocers. If what you are looking for is perfume, the mucus of a good mushroom, you have to abstain from those that are packaged and cultivated by man. What the mycophagus must do is to reach for the basket and venture into the forest through beech, oak, chestnut and pine groves, or, if they have to pay for them, look for a good supplier who will serve well-cut and whole mushrooms, not in shreds as they are sometimes displayed to the customer on the counters. The lengthening autumns and the shrinking winters help make the season lavish.

Now, I repeat, it must be borne in mind that not all mushrooms are edible and that some of them are also very poisonous. So that to collect them it is necessary to have a knowledge in the matter. Mushrooms that are not perfectly known should not be consumed, and when in doubt what to do is go to the mycological societies, which provide help and scientific knowledge for the identification of the different varieties. As a first rule, no one should trust unfamiliar mushrooms. You also have to be selective, it is absurd to collect them in quantities that we are not going to consume, and to collect them aged or parasitized. It is also not advisable to keep them too long before eating them, most of them decompose quickly.

It is always worth remembering that Italo Calvino wrote a beautiful parable about good and evil when talking about mushrooms with El viscount demediado. A Turkish cannon shot splits Viscount Medardo de Torralba in two, and both halves survive. The good and the bad. In the story, the evil part of Medardo wanders the land without peace, splitting the mushrooms and, in general, the forest mushrooms in two, feeding the poisonous half and floating the edible in a pond. «From the fields they went to the forest and saw a mushroom cut in half, a boletus, then another, a poisonous red boletus, and thus, walking through the forest, they continued to find, from time to time, these mushrooms that were sprouting from the land with half a stem and that they opened with only half an umbrella. They seemed divided with a net cut, and of the other half not even a spore was visible. They were mushrooms of all kinds, puffballs, chanterelles, agarics; and there were almost as many poisonous as edible ».

Medardo, the uncle, as is known, half bastard, left the poisonous halves in the nephew’s basket, and the others, the edible ones, he threw into the water.

Calvino recounts that the nephew would have wanted to ask the viscount halfway through why there were only half of each mushroom in his basket, but he thought the question was inadequate and was already walking away ready to fry the mushrooms when he met the servants who were chasing him. uncle and they told him they were all poisonous. Of course, he did not eat them.