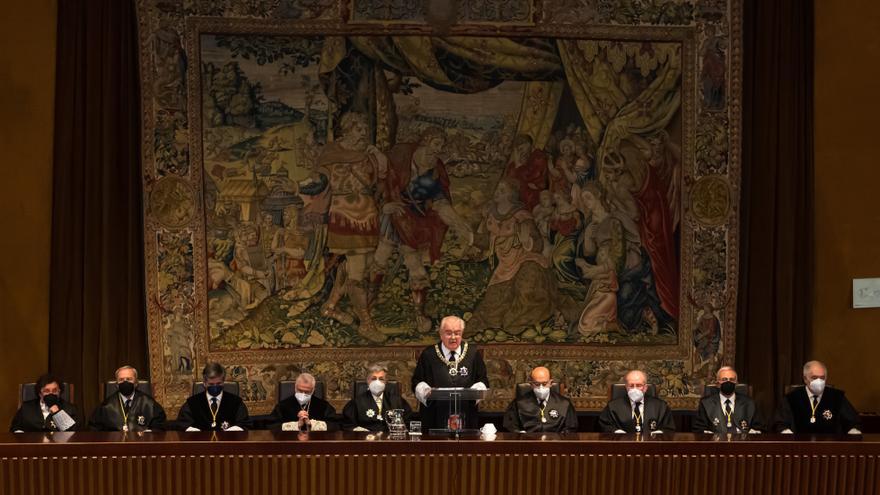 The Constitutional Court faces a short term from conservative magistrate Pedro González-Trevijano. The new president of the court of guarantees has a date until June 12, 2022 to manage such thorny issues as appeals against the abortion law, the Child Protection Law or the ‘Celaá Law’ of Education with a partial full renewed, unable to reach unanimity on matters of maximum public relevance and with the doubt whether there will be a new renewal in time. It is not clear that the Government can appoint the two magistrates that depend on their criteria due to the blockage of renovations that begins in the General Council of the Judicial Power (CGPJ) and that can be a plug in the Constitutional Court.

Inside the house, González-Trevijano’s first challenge will be to calm the waters in the plenary session itself. The last year has brought to the Constitutional issues of such relevance as the two states of alarm, the Citizen Security Law, the reviewable permanent prison or the convictions of the leaders of the you process Catalan independentist. Matters that have been sentenced without unanimity, with a large number of individual votes and in some cases with deep divisions within the court of guarantees.

Reducing these tensions and getting a little closer to unanimity on such important issues is one of the goals of the new president. The truth is that you will have several opportunities in the coming months with matters of great social importance. One of them will be the appeal of the Popular Party filed more than a decade ago against the abortion law: the original speaker, Andrés Ollero, has left the court and his portfolio of affairs has been assumed by Enrique Arnaldo Alcubilla, the most controversial candidate has lifted in recent weeks.

The magistrates also have relevant deliberations in the drawer. The presentation on Vox’s appeal against the Organic Law of Education (LOMLOE) known as ‘Celaá Law’ proposes that the Government be obliged to pay for schools that separate children by sex. It also has to study the appeal of the ultra-rightist formation against the Child Protection Law baptized as the ‘Rhodes Law’, and those of Vox and PP against the reform of the General Council of the Judiciary, among others. The latter is the reform that prevents the governing body of judges from making appointments while in office.

The division within the court has generated unease in the plenary, where some members consider that the absence of unanimity when interpreting the Constitution translates into insecurity, for example, when it comes to knowing how to deal with the pandemic. Another of the discomforts in the court is not in the hands of the new president: it is the unease over the effect that the political contest and the renewal process are having on the image of the Constitutional Court that citizens perceive. The exchange of stickers between PP and PSOE to unlock the negotiation, with profiles as marked as Enrique Arnaldo’s, has been one of the most controversial agreements in recent decades regarding the renewal of this body.

Another of González-Trevijano’s challenges will be to deal, precisely, with the presence of Enrique Arnaldo Alcubilla. His appointment at the proposal of the Popular Party has become an issue that has divided even the parties that do not propose them, such as PSOE and United We Can. Few times a deputy from a political formation had referred to an agreed candidate as “swallow it,” as Odón Elorza did in the congressional appointments committee. His presence, although without imputation, in corruption summaries linked to the PP such as Lezo or Palma Arena make the new magistrate a constant focus of controversy. His arrival at the plenary session has been accompanied by the vote against one of his colleagues and his landing has been accompanied by the absorption, among other issues, of the appeal of the PP of the Abortion Law.

Between controversies and divisions there will also be room for uncertainty due to the mandate of Pedro González-Trevijano, starting with its duration. The former rector of the Rey Juan Carlos University has until June 12, 2022 to exercise his work, the day his time as a Constitutional magistrate expires. His is, in addition, a position that does not depend in theory on negotiations in Congress or the Senate, having been appointed in 2013 by the Government of Mariano Rajoy. The question is whether by then the General Council of the Judiciary will be renewed and whether the Government will be able to appoint its two magistrates without waiting for the governing body of the judges.

In June 2022 there are four scheduled renewals of three conservative magistrates and one progressive appointed nine years ago by the Government -González-Trevijano and Antonio Narváez- and by the General Council of the Judiciary -Juan Antonio Xiol and Santiago Martínez-Vares-. A renewal of those four names under the current political scenario would reverse the balances within the Constitutional one.

The question that runs through the court of guarantees these days is whether this will be possible if the blockade of the Popular Party to renew the CGPJ is maintained. The latest reform leaves out the functions of a Council with the expired mandate to make appointments, and in Marqués de la Ensenada they interpret that this applies to the Constitutional appointments. This consequence of the blockade leads to another unknown: if the Government can update its two magistrates separately. The Organic Law of the Constitutional Court establishes that renewals must be done “by third parties every three” years. That is, in batches of four magistrates. If the CGPJ cannot do it, the question remains whether the Government will be able to do it on its own.

It is a situation that spoils the atmosphere in the high courts and the Council. So much so that on the day the new magistrates took office, CGPJ sources assumed that the agreement would be closed in a matter of days. The phrase was uttered a few meters from Félix Bolaños, Minister of the Presidency, who is leading the negotiations with the Popular Party. The Executive did not take long cool down those expectations.

The new Constitutional Court has, therefore, an intense half year ahead with big issues on the table and with many pending issues on the list of its new president. A president who was the rapporteur for the sentence that has caused the most division in the recent history of the Constitutional Court: the one that declared the confinement of the first state of alarm illegal and that went ahead with 6 votes in favor and 5 against to end up giving the reason, once again, to the extreme right party Vox.